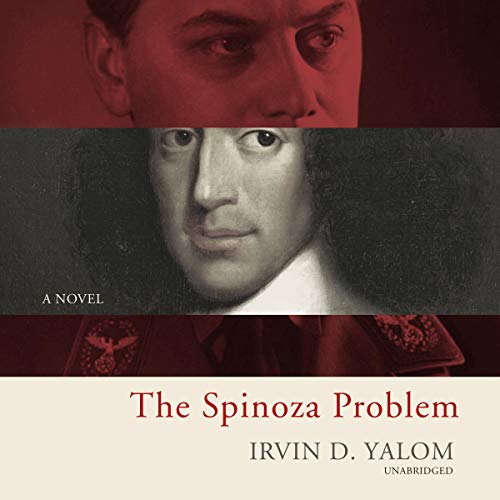 When 16-year-old Alfred Rosenberg is called into his headmaster's office for anti-Semitic remarks he made during a school speech, he is forced, as punishment, to memorize passages about Spinoza from the autobiography of the German poet Goethe. Rosenberg is stunned to discover that Goethe, his idol, was a great admirer of the Jewish 17th-century philosopher Baruch Spinoza. Long after graduation, Rosenberg remains haunted by this "Spinoza problem": How could the German genius Goethe have been inspired by a member of a race Rosenberg considers so inferior to his own, a race he was determined to destroy?

Spinoza himself was no stranger to punishment during his lifetime. Because of his unorthodox religious views, he was excommunicated from the Amsterdam Jewish community in 1656, at the age of 24, and banished from the only world he had ever known. Though his life was short and he lived without means in great isolation, he nonetheless produced works that changed the course of history.

Over the years, Rosenberg rose through the ranks to become an outspoken Nazi ideologue, a faithful servant of Hitler, and the main author of racial policy for the Third Reich. Still, his Spinoza obsession lingered. By imagining the unexpected intersection of Spinoza's life with Rosenberg's, internationally best-selling novelist Irvin D. Yalom explores the mindsets of two men separated by 300 years. Using his skills as a psychiatrist, he explores the inner lives of Spinoza, the saintly secular philosopher, and of Rosenberg, the godless mass murderer.

What listeners say about The Spinoza Problem

A deep and rich book, especially if you're interested in philosophy or psychoanalysis - but do approach it as part-textbook, rather than a well rounded novel.

The author is a psychiatrist and boy, does it show. Every single conversation is stilted and unrealistic. The two main characters are built up not through action, but by long verbatim accounts of therapy sessions - either literal, or under a very thin veneer of conversation about philosophy. There are long passages of material which is irrelevant (histories of Portuguese Judaism or early psychoanalysis) whilst important characterisation is left undone - 'Oh yes, I married again' says one central character in the only hint we ever get of his home life.

That said, the book has a quiet intensity which held my attention to the end, and I learned a great deal about Spinoza.

As superb blend of Philosophy, Psychoanalysis and putative histories.

As in the title, a superb blend plus Yalom is a writer who engages the reader through his style. He’s not overly didactic or pedantic. Attracted me to read more about Spinoza and to give actual hard copies to friends. Narration was good and kept my attention but as with all longer books, I feel I need the text to supplement the narrative and re-address certain sections.

I cannot remember the last time I have enjoyed a book so much.

I am a big fan of Yallom and his work around group and existential therapy, this book whilst being based around therapy is brilliant in its own right.

Thought that it would be dry, but actually good.

As this was free with the audible membership, I wondered if it would be any good, but turned out to be well written and thought provoking.

As usual, Dr. Irving Yalom raises the veil of how personal histories connect with wider societal movements. I loved it even if the narrator was at times bland.

"It could have happened'

Although, a fictionalised account of the lives of both protagonists, it was written in such a way that I believed every word. An incredibly engaging and enthralling book. brilliant.

Loved this book.
Great way to learn about Spinoza and the context in which he lived.

Great book and was gripping and informative. The only downside was the overdone psychology that was gritted in for no reason.

One of Yalom's Best

What a treat for my ears and brain this was. Irv Yalom brings his remarkable mind and imagination to blend fact and fiction of two worlds - seventeenth century Amsterdam and twentieth century nascent Nazi Germany, inhabited by two key figures the philosopher Baruch Spinoza and Nazi Party ideologist Alfred Rosenberg. Talking therapy draws a line between the two world's especially that of Rosenberg. His narcissistic frailties and need of approval find the monstrous focus of Hitler and what then plays out. It's an ambitious novel in part because of it breadth but also because Yalom is always teaching: Spinoza, Jewish culture, therapy, philosophy, art, literature and history. But this is Yalom's strength. His quiet, gentle brilliance to simplify the complex into a story, into a nugget of knowledge. Loved it.

I have read several Yalom works and am unsettled by The Spinoza Problem. I am apt to listen to it again on Audible to make a better assessment. This book is more a work of psychology and imagination than a volume of specific history and raw philosophy. This makes sense as Yalom is a psychiatrist, so he uses the profession he knows to create inspired fiction with the talking cure. He projects himself into the past. He imagines deep conversations and applied philosophy with Spinoza and others. Perhaps the title is my first question: was the excommunication situation a Spinoza “problem” or a societal problem? I was uncomfortable with the loudness and impassioned performance of the book at the beginning, but I adjusted to it after a while. The needs of individuals in a group and the demands of the group to regulate its members repeat as frequent themes in society and literature. Here, the exclusivity of “Aryan” ideologies, and Judaica-related scenarios clash. Religious demands are subject to fashionable trends, even when the claim is for 5000 years of continuity. Nazi-era contrasts and the psychological issues of identity conflicts appear in an uncomfortable and judged way. I felt that Yalom achieved a personal catharsis with the project, and he clearly had a lot of pent-up tensions released in this projective drama. The result is sedentary, post-Freudian, loud, modern, and diseased, but I could enumerate the same list for modern society itself. Here is a question - - how would Spinoza feel about being “reclaimed” by those who banned him during his life? Does the idea, “Once a Jew, Always a Jew,” trump Spinoza’s experience of mutual rejection in his lifetime? It feels to me the snagging of Spinoza despite his philosophy and experiences to be more offensive than even a posthumous proxy baptism because he did not want or identify with the Bible’s legacy. Modern Judaism (generally speaking) would not ban him today, so, yes, the lesson persists: one century’s absolute dogmatism is another century’s shame.

Painfully dull. Doesn't work as historical fiction. By comparison, The Schopenhauer Cure was much more enjoyable because the author didn't try to convey history through invented scenes and dialogue. The chapters on Alfred Rosenberg were more believable, presumably because it's easier to create less intelligent characters, but even those were tortuous.

reading it in the end of 2020, this book seems too relevant. highly recommend a good read.

As Spinoza had a few problems that were reproduced with Rosenberg the titular problem should be spelled out.

Yalom does an outstanding job once again. With each book I become more and more of a fan. Pure genius!

highly recommend it, one of my favourite books of all time, it keep you interested on it with the overlapping of the story.

Delving into a history that I had a little knowledge of has left me pleased to have picked up this book. Very interesting how influential writing can be taken up and driven to atrocious ends.

Excellent concept and well executed. Yalom is a master of therapy and deserves as much for his work as an author.

I enjoyed the performance, thank you. It is truly rare to listen to a book in such a non-stop as this time.
Construction of the book, interchanging chapters on both protagonists one by one, keeps attention acute throughout the whole narration. Deeply loved the combination of writer’s fiction and psychoanalytic parts. This is my first book by Yalom, and I’m eager to read more.

Challenging to hear the vitriol

The spewing of the hate and so hard to read. But I found the Spinoza chapters and especially the epilogue very rewarding.