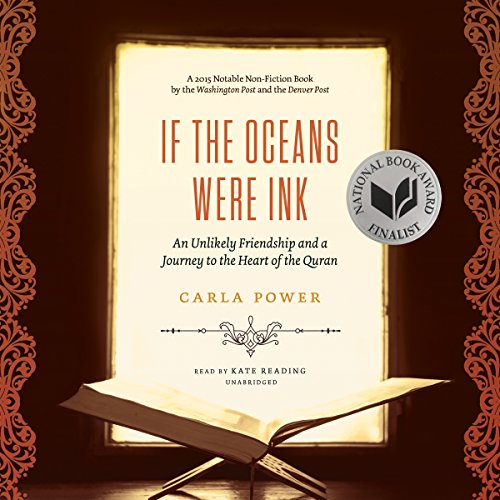 If the Oceans Were Ink

By: Carla Power
Narrated by: Kate Reading
Try for £0.00

Hailed by The Washington Post as "mandatory reading" and praised by Fareed Zakaria as "intelligent, compassionate, and revealing", this powerful journey will help bridge one of the greatest divides shaping our world today.

If the Oceans Were Ink is Carla Power's eye-opening story of how she and her longtime friend, Sheikh Mohammad Akram Nadwi, found a way to confront ugly stereotypes and persistent misperceptions that were cleaving their communities. Their friendship - between a secular American and a madrasa-trained sheikh - had always seemed unlikely, but now they were frustrated and bewildered by the battles being fought in their names. Both knew that a close look at the Quran would reveal a faith that preached peace and not mass murder, respect for women and not oppression. And so they embarked on a yearlong journey through the controversial text.

A journalist who grew up in the Midwest and the Middle East, Power offers her unique vantage point on the Quran's most provocative verses as she debates with Akram at cafés, family gatherings, and packed lecture halls, conversations filled with both good humor and powerful insights. Their story takes them to madrasas in India and pilgrimage sites in Mecca as they encounter politicians and jihadis, feminist activists and conservative scholars. Armed with a new understanding of each other's worldview, Power and Akram offer eye-opening perspectives, destroy long-held myths, and reveal startling connections between worlds that have seemed hopelessly divided for far too long.

What listeners say about If the Oceans Were Ink

I learned some new things and some added perspective on various topics the book goes through such as Aisha, Jesus, Mary, Jihad and essentially everything else the book deals with. I learned something in all those topics.
I have to say that I was utterly uninterested in both the lives of Carla and the Sheikh Akram as they were for the most part irrelevant.
This book is good for anyone who had no idea how muslims view the quran and how we take our teachings from it.

I really enjoyed listening to this audio book. I feel I am better able to understand Carla Power's view on looking at Islam from a non believing perspective. I have also developed a deep appreciation for the scholarship of Sheikh Akram Nadawi.

Loved the honesty in this book. The story of Carla's friendship with the Sheikh and the Quran were fascinating and beautiful.

truly the best book I've listen to this year.

Loved every chapter. We need more people like Carla Power and Sheikh Akram in this world. I've never left a review but I was so moved by this book I just had to leave one.

Ms Powers seamlessly flows through an Islamic and geopolitical narrative which provided me, a Muslim by birth with a deeper understanding of the meaning of the faith and the cultural and traditional nuances inflicting a shift from the true meaning of Islam: submission
Beautifully written, enjoyed the prose and the Reference to personal experiences
Look forward to reading more from Ms Powers
PS: have strongly recommended this book to friends and family

What would have made If the Oceans Were Ink better?

It should have been 1/3 the length--it was so repetitive. When a book doesn't really have a story--and it is presenting a viewpoint or perspective, as this one is--it needs to be short.

What could Carla Power have done to make this a more enjoyable book for you?

Stop repeating herself! Polygamy, child brides, Koran 4: 34 Women, politics of Muslim countries. Over and over again. Pages and pages on headwear. She made the point about piety vs the show of piety! She should have edited like crazy. Also, she seemed very opinionated and self-important. There was no movement or growth in either main protagonist.

Did Kate Reading do a good job differentiating all the characters? How?

Yes. The voices were distinct and believable.

Compassion for the majority of Muslims. Honor for the values of modesty in all things, and devotion.

If I listened to it again, I would listen at "double speed" on my iPod. Really, I was so bored by about 2/3 of the way through I was sorry I had started the book--even though it taught me a lot.

Great storytelling! Contextual presentation of the universal values of Islam based on the sacred text.

A must read for those who genuinely want to see a better tomorrow for all humanity.

Enjoyed every minute of it. Explained many conundrums and passages in the Quran. I have may not agree with all of what the Shaikh believes. But I admire his erudition, and her sensitivity.

I really enjoyed this book. As a Muslim, like Carla did, I appreciate the effort of seeing Islam from another's point of view. Recommend reading this, Muslim or not. 👌🏾

The narrator actually attempted to speak in voices with an Indian English accent for Re sheikh which I personally found offensive, high pitched tones for females, and deep voices for males. What are we 6??
The book itself is lovey, funny, touching, honest, and open. It’s refreshing to read about Islam for such a secular view as the author likes to call herself.

I wanted to like this book. I was interested in a good guide for a non-Muslim to the actual contents of the Qu'ran. But not here. Way overloaded with personal anecdotes and repetitious discussions of head-coverings and local culture vs. Islam. I'd like to know who edited this book -- because I want to make sure I never read another book edited by that person. Way too long. The author clearly thought the book was about her and her surprisingly limited encounters with actual Qu'ran scripture. The Sheik sounded like an interesting guy, but I didn't expect it to be about him either. Very few lines from the Qu'ran.

And the Narrator was just OK. She had exactly one male voice, which did serve minimally to separate a male speaker from the female narrator. Since there were no actual male characters -- only some random male voices -- beyond the Sheik it was OK. But I don't think the narrator was really put to any trouble here.