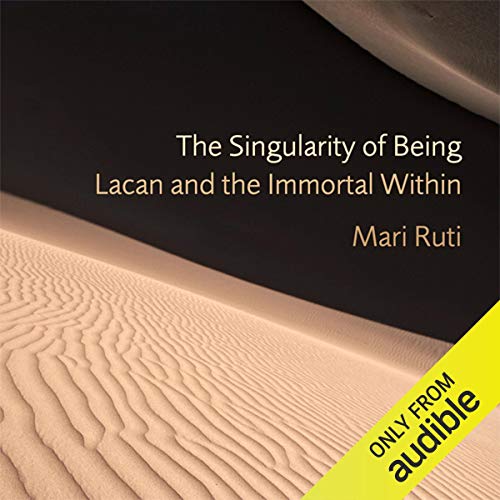 The Singularity of Being

By: Mari Ruti
Narrated by: Suzanne Toren
Try for £0.00

The Singularity of Being presents a Lacanian vision of what makes each of us an inimitable and irreplaceable creature. It argues that, unlike the "subject" (who comes into existence as a result of symbolic prohibition) or the "person" (who is aligned with the narcissistic conceits of the imaginary), the singular self emerges in response to a galvanizing directive arising from the real. This directive carries the force of an obligation that cannot be resisted and that summons the individual to a "character" beyond his or her social investments.

Consequently, singularity expresses something about the individual's non-negotiable distinctiveness, eccentricity, or idiosyncrasy at the same time it prevents both symbolic and imaginary closure. It opens to layers of rebelliousness, indicating that there are components of human life exceeding the realm of normative sociality.

Written with an unusual blend of rigor and clarity, The Singularity of Being combines incisive readings of Lacan with the best insights of recent Lacanian theory to reach beyond the dogmas of the field. Moving from what, thanks in part to Slavoj Zizek, has come to be known as the "ethics of the act" to a nuanced interpretation of Lacan's "ethics of sublimation", the book offers a sweeping overview of Lacan's thought while making an original contribution to contemporary theory and ethics.

Aimed at specialists and nonspecialists alike, the book manages to educate at the same time as it intervenes in current debates about subjectivity, agency, resistance, creativity, the self-other relationship, and effective political and ethical action. By focusing on the Lacanian real, Ruti honors the uniqueness of subjective experience without losing sight of the social and intersubjective components of human life.

What listeners say about The Singularity of Being

Ruti's book offers a very interesting and compelling way of framing the way we view reality, others, ourselves, and our interactions. It's not an easy listen, but compared to all the other texts out their on Lacanian thought, it's almost a breeze.

Lots to Think About

Really great discussion of various Lacanian viewpoints. Perhaps not for someone completely unfamiliar with some of the names and ideas, but none the less it made some more difficult discussions fairly accessible.

Now plays as it should

I would love to hear more from this author. More philosophical titles of current import would be very much appreciated. I think only some very few narrators can handle these topics, as the narrator of this author's work clearly does. Thank you.

The author made a wonderful spin on Psychoanalysis turning it left and using the opportunity to preset herself as one of the sufferers for Humanity. Bravo! Ms. Ruti is also incredibly successful splitting the world along good-evil axes and clearly indicating where she is. Gloriously nearsighted!

An academic read but well worth the effort

Mari Ruti does a wonderful job of unpacking and enlarging upon the inscrutable work of Jacques Lacan. She does so by repeatedly rephrasing and ultimately relaxing many of Lacan’s most complex concepts. She gives the principal of singularity a surprising metaphysical twist. The dangerous and profoundly transformative experience of the ‘Real’ is presumed to be the terrible face of God (Mari doesn’t refer to God) - an irresistible source of divine energy that may only be safely approached via special reflective surfaces (sublimation). It’s a bit romantic. But I bought it. Cezanne’s apples, notwithstanding, Ruti left me wondering how many of these principles function in the world. I definitely wanted a little more than the sweeping “All men kill the thing they love.” (She doesn’t quote Wilde). I have ideas but wanted detail anyway. This is audiobook is an illuminating and surprisingly inspirational experience. And the narration is spot-on perfect. Thank you, Audible.

at first I thought the content of this book bus to complicated to be enjoyed on the road but I was wrong. even though the book is quite sophisticated, the narration was so clear it helps with the listening. I would recommend this book to anyone would like to know more about Lacan especially about ethics, authentic action and critics of social diversity.

Simply and deeply done with an elegant wisdom and close reading of Lacan, Zizek, Baidou, Santner, Butler and others.