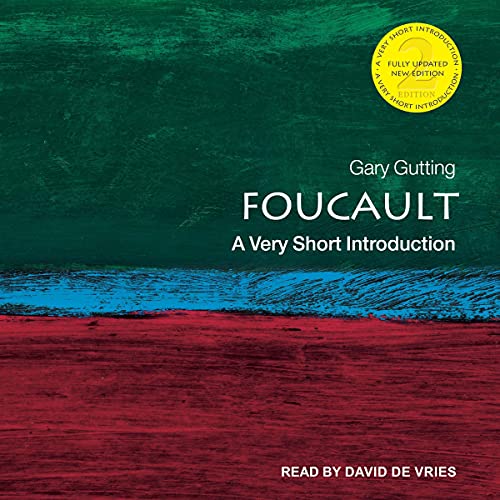 By: Gary Gutting
Narrated by: David de Vries
Try for £0.00

Born in 1926 in France, Foucault is one of those rare philosophers who has become a cult figure. Over the course of his life he dabbled in drugs, politics, and the Paris SM scene, all while striving to understand the deep concepts of identity, knowledge, and power. From aesthetics to the penal system, from madness and civilization to avant-garde literature, Foucault was happy to reject old models of thinking and replace them with versions that are still widely debated today. A major influence on queer theory and gender studies (he was openly gay and died of an AIDS-related illness in 1984), he also wrote on architecture, history, law, medicine, literature, politics, and of course philosophy.

In this Very Short Introduction audiobook, Gary Gutting presents a wide-ranging but nonsystematic exploration of some highlights of Foucault's life and thought. Beginning with a brief biography to set the social and political stage, he then tackles Foucault's thoughts on literature, in particular the avant-garde scene; his philosophical and historical work; his treatment of knowledge and power in modern society; and his thoughts on sexuality. This new edition includes feminist criticisms of Foucault's apparently sexist treatment of the Jouy case, as well as a new chapter offering a unified overview of the College de France lectures, now a major focus of interest in Foucault.

a good over view but a little short and a little dry. being one of onoy two audiobooks on Foucault available on Audible I had to go for this one. would rather have spent my money on alonger book that perhaps went delved a little more into the speculative surrounding the psychology of Foucault himself, but still a good starting point for those who want to read his actual works.
I did try to start Foucault's HoS but his description of 18th century Europe with the kids running around and all that... just put me off. Nothing scientific about the opening paragraphs as far as I'm concerned. Just a romanticized idea of a sexually liberated pre-industrial Europe. ImsureLl sorts was going on behind closed doors but I doubt there was much to be happy about it too.

A useful, not overly long guide to Foucault

I'd already had some conception of Foucault going into this text, and it certainly helped (if anyone needs a good opener, Tom Nicholas did a great video on YouTube about it; Foucault WTF), and it's helped ground my understanding a little more in the nature of his work, which is nice.