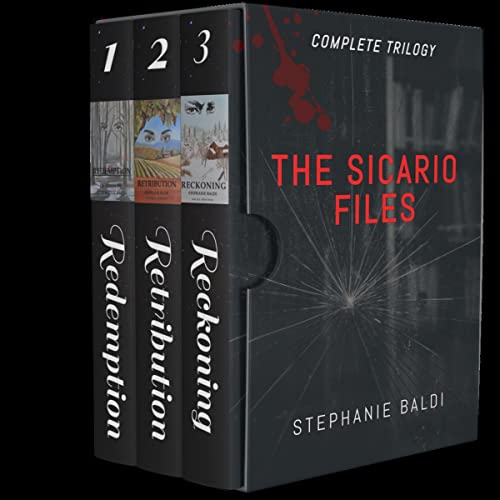 By: Stephanie Baldi
Narrated by: Amy Deuchler
Try for £0.00

The Sicario Files Trilogy follows the journey of a hired killer and those who are hunting him. Nicholas D'Angelo is a ghost, a hired killer at the top of his profession, working for Ricardo Santiago, a ruthless drug lord. Nick's loyalty is tested when he comes face to face with Carrie Overton, the woman who stole two million dollars from his drug lord boss and Nick's heart.

But Ricardo wants his money, and he wants Carrie dead. On the run, and with his past catching up to him, Nick is determined to keep Carrie safe from those trying to kill them.

What listeners say about The Sicario Files Complete Trilogy: MR

I loved the narration of Amy Deuchler

Nicholas D'Angelo a hired killer at the top of his profession, working for Ricardo a ruthless drug lord. Carrie Overton, stole two million dollars from Ricardo and Nick's heart. What does a ruthless killer do when faced with the woman he loves and loyalty to is boss. The boss wants her dead and his money back. What you do is go on the run. Nick is determined to keep Carrie safe

Loved the story, Loved the narration, I will listen again.

This was a fantastic story! So many twists and turns, tragedy, triumphs and I couldn’t stop listening to it! There are books I love, but have a hard time getting past the voice of the narrator or the narrator doesn’t pull you in…That is not the case here! Amy Deuchler is an incredible narrator! I’ve actually gone and found as many books as I can narrated by her and have yet to be disappointed. This trilogy is a must listen!

This book is excellent. Nick is a hired killer so expect violence. Stephanie Baldi did an excellent job of developing the characters. The story keeps you wondering what will happen next. This is a highly recommended book if you want a long involved story.

The narration was excellent too! Amy Deuchlet was a great choice for this book.

I received this book at my request and have voluntarily left this review.

I would listen to more books by this author and narrator.

I really enjoyed this series. The storyline is engaging and interesting. It pulls you in and makes you want to see what happens. It is about life, trust, betrayl, family and love. I started listining and the characters came to life and and I couldn't stop. Great Listen. I recommend this to all. I received it as a gift and this is my voluntary review.

Enjoyed this trilogy very much. Main characters were likable, even the “ghosts”. Would recommend reading.