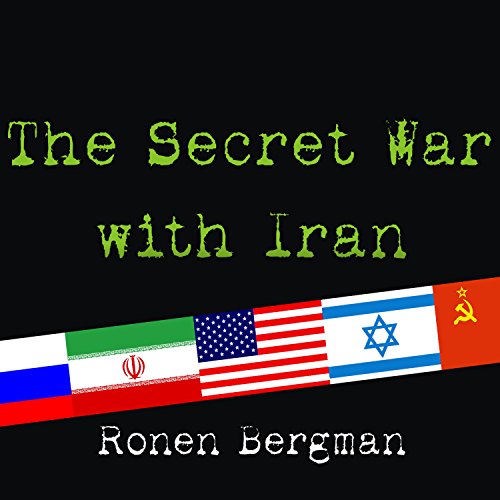 The Secret War with Iran

By: Ronen Bergman
Narrated by: Dick Hill
Try for £0.00

The 30-year clandestine struggle against the world's most dangerous terrorist power.

In the years since 9/11, the U.S. war on terror has focused on al-Qaeda, Afghanistan, and Iraq. Coverage of Iran has been devoted almost exclusively to its nuclear ambitions. Yet, as Ronen Bergman's groundbreaking reporting in this vital investigative history reveals, for 30 years, Iran has been the world's leading sponsor of global terror and stands as the most formidable sponsor of terror in the world today. Bergman, one of Israel's top investigative reporters, gained unprecedented access to extraordinary sources from top to bottom in the Mossad and intelligence agencies around the world.

Based on over 10 years of research and more than 300 exclusive interviews with key intelligence figures, he reveals that Iranian terrorist masterminds have crisscrossed the globe, conducting bombings and assassinations with impunity---even renting apartments and planning bombing attacks in New York City. Iran's proxy, Hizballah, has virtually taken over southern Lebanon and threatens Israel with high-powered weaponry supplied by Iran. Iran and Hizballah worked closely with al-Qaeda and other Sunni terrorist groups in developing their terrorist operations, and Iranian commandos trained Iraqi insurgents in the crafts of suicide bombing and the building of the roadside bombs that have killed so many U.S. troops in Iraq.

In response, and largely beneath the public's radar, a vast clandestine war has been fought with Iran and Hizballah on one side and the CIA, Israel's Mossad, and their European counterparts on the other. The full story of that secret war, told for the first time here, will fundamentally change the debate about U.S. national security priorities. A new axis of evil is emerging from Iran and spreading around the world, and Bergman shows that the CIA and the Mossad have so far been unable to thwart it. The Secret War with Iran is riveting and urgent.

What listeners say about The Secret War with Iran

This is probably the best audio book I have ever listened to about current events in the Middle East, specifically events in Iran and Israel.
The material is accurate, well researched and clearly presented.
As always, Dick Hill does a great job of narrating.

More about Hezbollah and Hamas, little about Iran

An interesting book, but you'll learn more about Israel and Hezbollah and Hamas, organizations through which Iran acts secretly. I was hoping for more about the overt hostilities with Iran, and the inner workings of Iran, but as the title says, it's the secret war. Overall, good, but not exactly about Iran.

What made the experience of listening to The Secret War with Iran the most enjoyable?

I am finding this book impossible to listen to. Rise And Kill First, narrated by Ron Bergman, was great to listen to, but this slow, pedantic fashion of this narrator has left me with a great story I cannot bear to hear.

Be more careful with the narrators- Life is too short to go at this speed!

Iran is ground zero of the current problems in the Middle East. They hate us, and won't stop unitl one of us are done. If you want to be informed, and understand why we are fighting in that region, then read this.

the secret war with Iran

Excelent in all aspects. It makes you much more aware of the problems in the Middle East

I love audio books (on audible Amazon), respect & learn from different point of views. I usually listen and sometimes read the same book at the same time so to feel it more.

I was enjoying listening to the book and found some differences between the audio and the book and thought it’s normal as it might be another edition, but I noticed that the additions in the audio copy was praise to Israel and I thought he’s an Israeli writer so no problem, but then OMG !!!

I was really shocked when I was listening and reading the Epilogue and it made me wonder if all I listened to was CORRECT or MISLEADING. Why ?

What does this mean !!! Is it audible? Is it the narrator? Is it the editor? Whose fault is it !!! And how can I trust listening to any audio book now !!!
I’m shocked and disappointed.

it is great book and it basically tells the story of this conflict , it is very recommended for basic knowledge .

It is a good book to listen to but I found a lot more biased than I initially thought it to be. Although, the book covers both sides, the author is undoubtedly taking Israelis side and portraying them as saints compared to Iran/Hezbollah.

It is like mainstream journalism writing where the word "terrorist" in every sentence is attached to Iran or Hezbollah.

I was amazed at how much goings on there is in our world that we are not aware of. very informative !!

Unbelievable Stories of US, Iran, Israel,

Anyone who want to know the 'truth" about who knew, and knows about the last 35 years of international terrorism paid, supported, endorsed, sponsored, and conceived (yes all of these) by the Nation of Terrorism, IRAN, has to read this book. The general public is in the dark about what Iran is doing to this world.

What was one of the most memorable moments of The Secret War with Iran?

The clear fact that every western government has absolute and unequivocal knowledge of each and every terrorist act sponsored directly by the highest levels of government of IRAN for the last 35 years, and all of them have sold us all lies and BS, for fear of further terrorist acts against their citizenry.

If you could give The Secret War with Iran a new subtitle, what would it be?

How our governments have lied to us about the knowledge the CIA, MI6, M5 and every other intelligence agency has regarding IRAN active support of international terrorism on a DAILY basis.