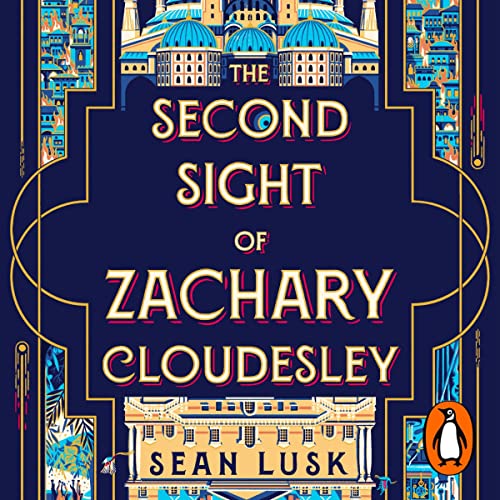 The Second Sight of Zachary Cloudesley

By: Sean Lusk
Narrated by: Clare Corbett,Bert Seymour
Try for £0.00

In 1754, renowned maker of clocks and automata Abel Cloudesley must raise his new-born son Zachary when his wife dies in childbirth.

Growing up amongst the cogs and springs of his father's workshop, Zachary is intensely curious, ferociously intelligent, unwittingly funny and always honest—perhaps too honest. But when a fateful accident leaves six-year-old Zachary nearly blinded, Abel is convinced that the safest place for his son is in the care of his eccentric Aunt Frances and her menagerie of weird and wonderful animals.

So when a precarious job in Constantinople is offered to him, Abel has no reason to say no. A job presented to him by a politician with dubious intentions, Abel leaves his son, his workshop and London behind. The decision will change the course of his life forever.

Since his accident, Zachary is plagued by visions that reveal the hearts and minds of those around him. A gift at times and a curse at others, it is nonetheless these visions that will help him complete a journey that he was always destined to make—to travel across Europe to Constantinople and find out what happened to his father all those years ago.

With a Dickensian cast of characters that are brilliantly bonkers one moment and poignant the next, Sean Lusk's debut will take listeners on an immersive journey into the wonders of the world of Zachary Cloudesley.

What listeners say about The Second Sight of Zachary Cloudesley

Every word, every sentence is beautifully put together and lovely to listen to. A captivating story of delightful, enchanting, and very human characters. My favourite audible listen for a very long time, performed with great talent and sensitivity by Clare Corbett, Bert Seymour

Sean this is wonderful! Hurry up and write another!

Wow! I loved this book. I didn’t want it to end, but it did and happily….. which makes a nice change.
All the characters are painted so well, often Dickensian, but with more sense of humour. It enchanted me, and being a lover of uncaged creatures felt huge comradeship with Zachary. I love books that are different, absorbing and make me laugh outloud. A gem! More please!

A lovely book. The characters come to life in such a powerful way.

I want a Mrs Morley in my life!

Absolutely loved this book! Great story, well-developed characters and wonderful language. Totally enthralled by the brilliant narration. A must read!

I just couldn’t stop listening. I loved the characters all of whom were well drawn. It reminded me of Charles Dickens in a good way.

Beautifully written and involving story with humor , love and pathos . The story of enduring love and loyalty with originality and brilliant characterization . Well narrated too .

A beautifully written tale of adventures, showing huge imagination with constantly beguiling prose. A ground-breaking novel that will charm you and its themes and fine characters will live long in the memory.

The readers are well measured and it has been a joy to listen to. The story is engrossing as you wish the main characters happiness that appears to be very hard to come by.

Started off well then seemed to drift and didn't keep my interest. Nice narrating voice which I think kept me reading for longer then had to give up