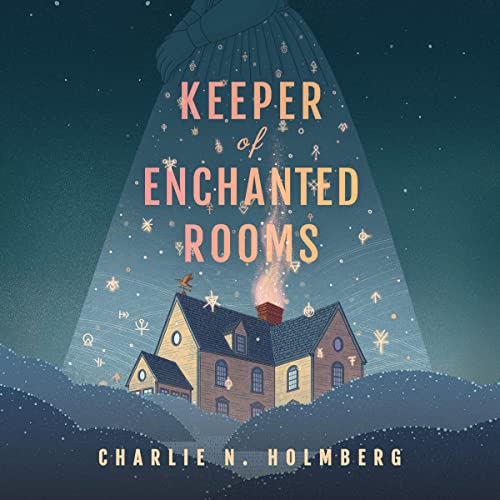 A house of haunted history and ill temper. Make yourself at home in this beguiling novel of love, magic, and danger by Amazon Charts and Wall Street Journal bestselling author Charlie N. Holmberg.

Rhode Island, 1846. Estranged from his family, writer Merritt Fernsby is surprised when he inherits a remote estate in the Narragansett Bay. Though the property has been uninhabited for more than a century, Merritt is ready to call it home—until he realizes he has no choice. With its doors slamming shut and locking behind him, Whimbrel House is not about to let Merritt leave. Ever.

Hulda Larkin of the Boston Institute for the Keeping of Enchanted Rooms has been trained in taming such structures in order to preserve their historical and magical significance. She understands the dangers of bespelled homes given to tantrums. She advises that it’s in Merritt’s best interest to make Whimbrel House their ally. To do that, she’ll need to move in, too.

Prepared as she is with augury, a set of magic tools, and a new staff trained in the uncanny, Hulda’s work still proves unexpectedly difficult. She and Merritt grow closer as the investigation progresses, but the house’s secrets run deeper than they anticipated. And the sentient walls aren’t their only concern—something outside is coming for the enchantments of Whimbrel House, and it could be more dangerous than what rattles within.

“Filled with delightful period details and artfully shaded characters, this whimsical, thoughtful look at magic and its price is the perfect read for a cold fall night.”—Publishers Weekly

“This is Charlie at her best—intriguing mystery, creative magic systems, with plenty of romance to keep me turning the pages.”—Wall Street Journal bestselling author Jeff Wheeler

What listeners say about Keeper of Enchanted Rooms

Absolutely loved this engaging story. It kept me all ears wanting to know what was going to happen.

Enjoyable story, relatable characters who were goofy in a good way 🙂 One of those where you miss the characters when you've finished the book. Will be getting the second book when it's released.

The beginning may remind you of Beauty and the Beast (Disney), or, with a more literary nod The House with Chicken Legs (Anderson). This made me doubt my choice. But, it had a big finish a la Jane Eyre (Brontë) and Charmed (TV). Altogether a cosy magic rom-fantasy.

This was the perfect story to wrap up the spooky season, and I especially loved the audiobook narration as well. The blend of magic, mystery and romance was better than I could've hoped for, and I can't wait for the next book in the Whimbrel House series.

If you could take the enchanted characters from the Beast's castle and sprinkle them with a little magic from Hogwarts, then you'd have Keeper of Enchanted Rooms. A delightful book that will draw you in and keep you on your toes until the very last page.

I love what this book sets up, the idea of houses that have personalities. I hope this will be a long series.

I don't know how to fairly review a book like this

The author's style is pretty far removed from my usual reads. I found it too light, too quippy almost to get any textural sense of the world or the characters. However, the story wasn't bad. It was semi-predictable, cute, and wrapped up with a bow. But I found it to lack depth. It isn't something I would re-read. It would be a decent vacation read or travel book. Light entertainment.

I very much appreciate this author’s style and choice of narrators. I LOVED the arc of the love story in this one. This is a lovely story with charming characters…the good ones anyway lol

Not only was the story intriguing and the premise unique and compelling, and the characters written well, the performances by the narrators for the audiobook were fantastic!

Much more fun than I expected.

Interesting story with refreshing characters. I liked how they interacted with each other and with Owen.
The villain was pretty scary.

I honestly loved listening to this book. The characters were relatable (not the magic piece, but I wish), and made me invested in completing their story. I'm glad there was conflict to make the book more than just a romance, but I rated it 4/5 due to how quickly the conflict was resolved (in 2 chapters). Overall, a super cute read that I enjoyed!

Another triumph for Charlie N. Holmberg

What's not to like. Captivating complex characters. Magic, chaste romance, and lovely narration. I'll read whatever she writes.