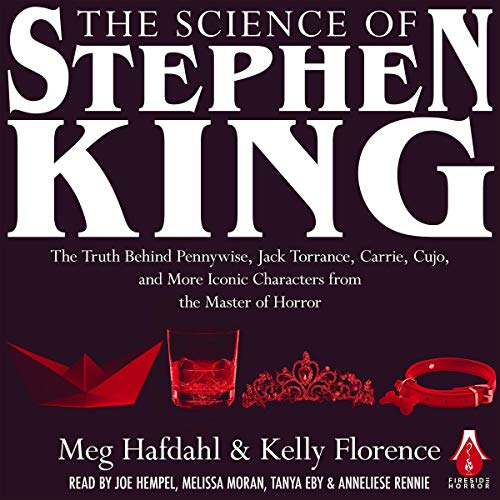 The Science of Stephen King

Uncover the theories behind the master of horror's macabre tales: It, The Shining, Carrie, Cujo, Misery, Pet Semetary, and so much more!

Gothic media moguls Meg Hafdahl and Kelly Florence, authors of The Science of Monsters and The Science of Women in Horror, and co-hosts of the Horror Rewind podcast called “the best horror film podcast out there” by Film Daddy, present a guide to the Stephen King stories and characters we all know and love. Through interviews, literary and film analysis, and bone-chilling discoveries, The Science of Stephen King delves into the uniquely horrific Stephen King universe to uncover the science behind the legendary novels that have become an integral part of modern pop culture, answering such questions as:

Join Kelly and Meg as they learn if we all really do float down here!

What listeners say about The Science of Stephen King

I wrote better book reports on Stephen King in middle school. Unfocused, doesn't deliver on the scientific OR literary front. I'm kind of heartbroken; I was expecting a fascinating analysis of some depth and attention.

This was a very captivating book. The narration was perfect. A solid 4 1/2 stars.

The Science of Stephen King

I really liked this book.It was very interesting to find the background of some of Mr Kings characters and storylines. Narrations by:Joe Hempel, Melissa Moran, Anneliese Rennie, and Tanya Eby were very good.I was given this free review copy audiobook at my request and have voluntarily left this review.

Don’t waste your credit or time

They try to break down how and why his “best books” were so effective. All it really did was make me want to sleep. I finished it hoping for something redeeming I found nothing.

This was an interesting and definitely different read to the ones I am used to. Meg Hafdahl and Kelly Florence explore several of Stephen King’s works and try to elaborate on diverse aspects explored in them about diverse subjects like alcoholism, clowns, auras, or aliens. To me, the most exciting parts were the ones about King’s life and the process of writing, but about this, I think On Writing goes deeper into the subject.

I found some of the topics quite interesting but I have to say that I would not consider most of them as science, so in my opinion, the title of this book is a bit misleading. I would describe the book as a collection of trivia and curiosities with some relevancy across some of King’s books. I enjoyed learning about some random facts and folklore that I wouldn’t have stumbled upon otherwise. There are also several interviews about several of the subjects. It is an eclectic book, as it touches many topics but they are all discussed quite superficially. I wish the facts would have been selected to include only the scientific ones, as the title suggests, but I agree that Stephen King has written about many mystic and esoteric phenomena, and while I may enjoy those in a fiction story, an interview with someone who can see auras, for instance, throws me off somehow.

Another thing to take into account before diving into this book is that it contains spoilers, so I would recommend reading the books it mentions beforehand. While revealing the ending or an important development in some of the books may seem necessary, I think this could have been avoided in many cases, or at least I think a note should have been included about this at the beginning of the book.

The book is narrated by Joe Hempel, Melissa Moran, Anneliese Rennie, and Tanya Eby, who bring the various interviews and interviewees to life by giving the reader the same feeling as watching a documentary. They did an amazing job at this, creating dynamism and delivering the text in a light and enthusiastic way. The audio production is spotless.

I received this book for free in exchange for an honest review. This does not affect my opinion of the book or the content of my review.

A wonderful look into the works of the King

Peeling back the curtain at some of Kings best works, Meg and Kelly have given an interesting look at some of The Master of Horrors best works! The audiobook is done in an interview style where the authors are each a different narrator. The narrators are obviously fans of his work and that shines through in this work. Fun and five stars for me.