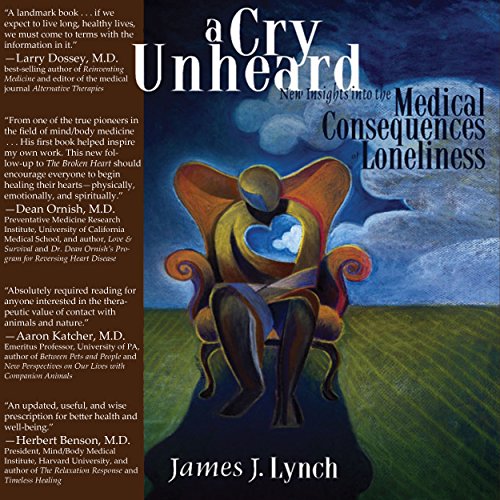 By: James Lynch
Narrated by: Charles Henderson Norman
Try for £0.00

What's one of the leading causes of premature death in the Western world?

And whom does loneliness kill?

Who does it not? For every citizen in every one of the world's technologically advanced nations--from homemakers to businesspeople, from college students to school dropouts, from the elderly to the young--loneliness is an unrecognized, unguarded-against stalker.

Though it's never cited as the cause of death on a standard death certificate, loneliness, like communicable diseases of old, comes like a thief in the night to claim its victims. While medical science continues to focus on communicable disease, Dr. James Lynch has devoted his career to elucidating a new but equally potent cause of disease and premature death--communicative dis-ease--and to explaining its widespread but little-comprehended medical consequences. In 1977 Lynch became the first to document how loneliness contributed to all forms of premature death, especially from heart disease. His much-publicized and oft-cited best seller, The Broken Heart: The Medical Consequences of Loneliness, caused a social and medical stir both wide and deep and was translated into 10 languages.

Determined now to show how loneliness has festered and grown into a silent epidemic, and drawing on a lifetime of his own original medical research, he makes a number of provocative charges and predictions in his new groundbreaking sequel, A Cry Unheard: New Insights into the Medical Consequences of Loneliness.

What listeners say about A Cry Unheard

A broken heart is the emotional pain one feels after losing a loved one; death, divorce, breakup, separation, betrayal or rejection. The book touches on many of these aspects thru studies and trials. Although breaking ones heart does not usually mean your heart has literally broken, there have been studies conducted to prove that there is a real condition called "Broken Heart Syndrome." This happens when a traumatizing event triggers the brain to release chemicals that can weaken the heart tissue. The author touches on many of these bases and studies in the book. The narrator did a great job of delivering the context of the book, was easy to understand and follow. The narrator has an authoritative voice which fit well for this book. There are many interesting facts and theories presented. A nice listen for anyone that would like a little more understanding into the human condition in a fast growing digital and electronic world.

This was a very educational book. I was interested in the book because I know that at my work. We all work weird hours and have odd days off. So we are not afforded a lot of family time or time with friends. We seem to attend many funerals of our co-workers and/their wives. So I was hoping to learn something useful from the book.
I learned more than something useful. While listening to the book I learned a lot about myself, friends, co-workers and even my kids. I found that I needed to try harder to spend time with important people in my life. I also realized I needed to have more patience with co-workers. That I used to think talked a little too much. Really it gave me a new understanding of the people around me. I know that I try to always to be kind to people because I don’t know how their lives really are. But I have this new understanding of what human kindness can do for those people I interact with.
I learned that with my youngest son he needed so much more from us. I have tried to make a point to interact with him differently also. I finished this book about 4 days ago and I can already see the difference in our relationship. His attitude has started to change for the better when he talks with us. Yesterday I found myself thinking “Wow” this is what it was all along.
The author has been studying and documenting the effects of loneliness for many years. He has a very clear grasp on what we need to be healthy. I’ve known all along it had to be more than just eat right and exercise. But this truly makes sense to me. But that is easy for me to see because every year for the last 18 years I seen too many funerals for people for are only around 60 to 65 at my work past away. Never did I dream it could be from the loneliness we all feel in our normal routine but it does make sense.
I have also heard it is unknown why people who regularly attend church live longer. Well that would make sense. They would have a strong connection to the others at the church and socialize much more. They also have people to look forward to seeing on a regular schedule.
So I highly recommend this book to anyone who wants to study the subject or just learn something new about yourself and others around you.
About the narrator Charles Norman his voice was very clear and easy to listen too. I think I have also heard him as a narrator on TV documentary series. So it was nice to listen to a familiar voice.

I was unaware that the book I signed up to read was a text book.I found the information to be very educational and interesting.Can lonliness break a heart physically as well as mentally?It would seem so.Read by Charles Henderson Norman,we are taken thru a synopsis of Mr.Lynchs earlier works and findings.He gives many examples that makes it hard to argue with the conclusion.Thinking of my own family history I see many of his stories could be our own.Our past sticks with us and has an effect on everything we do in life."I was provided this audiobook at no charge by the author, publisher and/or narrator in exchange for an unbiased review via AudiobookBlast or MalarHouse dot com"