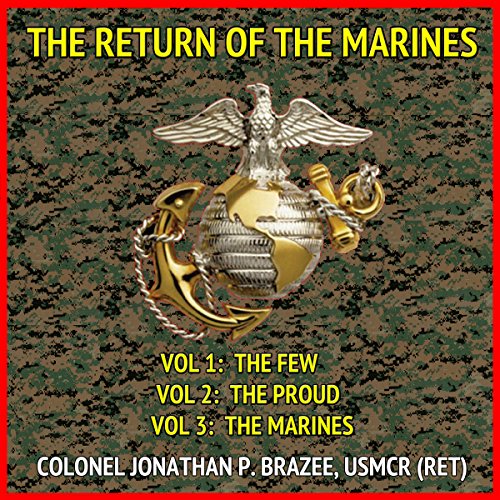 The Return of the Marines

By: Jonathan P. Brazee
Narrated by: Eddie Frierson
Try for £0.00

The Few: Book 1 - Gunnery Sergeant Jacob McCardle is the commander of the Marine Detachment at the US Embassy, New Delhi, when the president of the United States arrives on an official visit: the same man who, as a Congressman, sponsored the bill that had decimated the Corps in a cost-cutting effort. As the president arrives, the embassy is attacked and isolated by a mob of nationalists. With the Indian government seemingly unwilling to take action to restore order and with an ambitious vice-president seizing this as an opportunity to move up to the White House, it is up to Gunny McCardle and his small band of Marines to keep the president alive. Faced with tremendous odds, Gunny has to lead his Marines in an almost impossible task. That is nothing new to the US Marines. Impossible tasks are the Corps' forte. But can his small detachment keep up the tradition of the Corps and succeed despite tremendous odds?

The Proud: Book 2 - After the events at the US Embassy in New Delhi, the Marines are being brought back as a combat unit. Newly commissioned 2d Lt Anthony Niimoto, a hero of the embassy takeover, is with the first Marine battalion to get back into the deployment cycle. Assigned to anti-piracy, this is supposed to be a dull deployment. But when a US ship is seized by Somali pirates, it's First Platoon, K 3/6 at the tip of the spear. With SSgt Davidson, an ex-Ranger who returns to his Marines roots, the two of them must lead their platoon into harms way, ever conscious of Black Hawk Down, the Battle of Mogadishu. Was Tony Niimoto a one-shot wonder in New Delhi, or does he really have what it takes to be a leader of Marines?

The Marines: Book 3 - China is growing in power and in need of raw materials. When an aggressive general, with encouragement from an unnamed puppet master in the Politburo, moves to seize the Spratly Islands from The Philippines.

What listeners say about The Return of the Marines

I enjoyed the series and am very glad I purchased the trilogy in one audio book well worth the money .

Most poorly written book I have ever heard

What disappointed you about The Return of the Marines?

Everything !! The writing in this book is just awful. It is hard to believe that a professional edited this book.