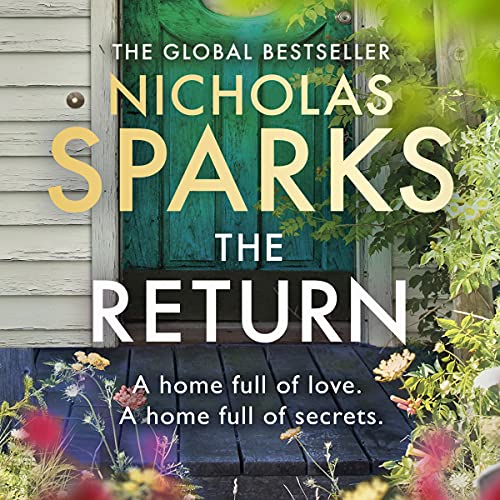 By: Nicholas Sparks
Narrated by: Kyf Brewer
Try for £0.00

Number one New York Times best-selling author Nicholas Sparks returns with a moving new novel about an injured army doctor and the two women whose secrets will change the course of his life.

Trevor Benson never intended to move back to New Bern, North Carolina. But when a mortar blast outside the hospital where he worked as an orthopaedic surgeon sent him home from Afghanistan with devastating injuries, the dilapidated cabin he'd inherited from his grandfather seemed as good a place to regroup as any.

Tending to his grandfather's beloved beehives while preparing for a second stint in medical school, Trevor isn't prepared to fall in love with a local.... Yet, from their very first encounter, Trevor feels a connection with deputy sheriff Natalie Masterson that he can't ignore. But even as she seems to reciprocate his feelings, she remains frustratingly distant, making Trevor wonder what she's hiding.

Further complicating his stay in New Bern is the presence of a sullen teenage girl, Callie, who lives in the trailer park down the road. Claiming to be 17, she works at the local sundries store and keeps to herself. Discovering that she was once befriended by his grandfather, Trevor hopes Callie can shed light on the mysterious circumstances of his grandfather's death, but she offers few clues - until a crisis triggers a race that will uncover the true nature of Callie's past, one more intertwined with the elderly man's passing than Trevor could have ever anticipated.

In his quest to unravel Natalie and Callie's secrets, Trevor will learn the true meaning of love and forgiveness...and that in life, to move forward, we must often return to the place where it all began.

What listeners say about The Return

This is a story is a grandfather and grandson, a mysterious young girl, a love affair and a few beehives.

Good character development, good pacing, the narrator does a great job. A bit low tone in areas when we were listening in the car but could be just my speakers.

If your looking for an easy summer read, then this is perfect.

Excellent I really enjoyed the story and all came together in the end,a happy ending better still.

Beautiful story of beautiful feelings of beautiful people. loved every moment of it! ❤️ And performance is great

An easy story to listen to but not as involved or as deep as prior Sparks books.

I’ve read (listened to) every one of Nicholas Sparks’s books and this was just flat out boring. TBH I couldn’t even finish it, such a shame.

beautiful bok to Read. Narrative was well read and caught your heart and attention.

Romance and a beautiful story.

The story was easy to follow and yet nothing obvious of what the future may hold. Loved it.

Not as gripping as some of his previous books, but a lovely story none the less, with plenty of mystery, romance and heartfelt moments! Beautifully written.

Another winner by Nicholas Sparks!
Loved the parallel story of his romance with Natalie, and the mystery of his grandfathers last journey. Keeps you guessing till the end.

Enjoyed this audiobook so much. Could not stop listening. Amazing story, I was captivated from beginning to end.

Characters, each with their flaws and solid realistic backgrounds, relate in ways that move the human heart. well done Nicholas.

I loved getting to know the 3 main characters and their stories. I couldn't put it down because I wanted to know what would happen. A love story with some suspense.

I did not really enjoyed this book.
I love Nicholas Sparks' writing style but this one did not do it for me.
There is no body to the story or characters.
The narration was okay

Overall pretty average for a Sparks book. Everything was just a bit bland, the characters mostly 2 dimensional and story was lacking anything genuinely engaging. Good to have on in the background if you’re working basically.

I am a huge N Sparks fan - read all his books. This one has all the usual beauty in words and narrative that one expects from this author. However, throughout the book, I felt that I was on a luke warm but lovely journey with likeable characters... waiting all along for a summit point, inflection point, climax of some sort... but the book never got there. The story has some interesting twists and turns but little that stands out and really stays with you. I felt like the prologue rushed to capture elements that should have been in the book... and that the end was premature. So, i enjoyed the book, but expected more...