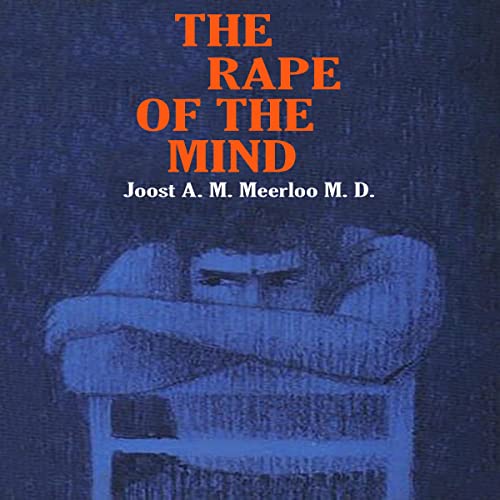 The Rape of the Mind

Since 1933, when a completely drugged and trial-conditioned human wreck confessed to having started the Reichstag fire in Berlin, Dr. Joost A. M. Meerloo has studied the methods by which systematic mental pressure brings people to abject submission, and by which totalitarians imprint their subjective "truth" onto their victims' minds. The first two-and-one-half years of WWII Dr. Meerloo spent under the pressure of Nazi-occupied Holland, witnessing firsthand the Nazi methods of mental torture on more than one occasion.

Then, after personal experiences with enforced interrogation, he escaped from a Nazi prison and certain death to England, where he was able, as Chief of the Psychological Department of the Netherlands Forces, to observe and study coercive methods officially.

After the war, he came to the United States. As more and more cases of thought control, brainwashing, and mental coercion were disclosed - Cardinal Mindszenty, Colonel Schwable, Robert Vogeler, and others - his interest grew. It was Dr. Meerloo who coined the word menticide, the killing of the spirit, for this peculiar crime.

It is Dr. Meerloo's position that through pressure on the weak points in men's makeup, totalitarian methods can turn anyone into a "traitor". And in The Rape of the Mind, he goes far beyond the direct military implications of mental torture to describing how our own culture unobtrusively shows symptoms of pressurizing people's minds. He presents a systematic analysis of the methods of brainwashing, mental torture, and coercion, and shows how totalitarian strategy, with its use of mass psychology, leads to systematized "rape of the mind".

He describes the new age of Cold War with its mental terror, verbocracy, and semantic fog, the use of fear as a tool of mass submission, and the problem of treason and loyalty, so loaded with dangerous confusion. The Rape of the Mind is written for the interested layman, not only for experts and scientists.

What listeners say about The Rape of the Mind

a vital read for those looking to better understand what tries to control us and what we must do as humans to be ready and capable in the face of those seeking absolute power over others.

Keeping this book in a digital and physical shelf! Must read again!
This book sharpens the mind!

not a fan of the narrator

too good of a book the narrators syntax or fluctuations did not speak to the work of the author, it's like he doesn't know what he's reading, his voice does not match with the seriousness of the content, the narrator does not set the mood utterly terrible worse narration of her thus far love the book hate the narration.

Powerful history written by one involved in the twentieth century

Mankind and governments have not changed since this book was written. Science is shown repeatedly used to control and mislead people, Governments and businesses using techniques to shape our behavior for the better good, which means less freedom for regular citizens and more profits for an elite few.

Essential reading for our modern age. So many points are seemingly more relevant today than they ever could possibly have been when this was published.

My only critiques are for the reader and the recording. The recording made quite a few errors, mostly in the last third, where the lines stop, then repeat themselves again. It was poorly edited in those spots.

The reader was fine in general, but I didn't like the sound of his voice, and it felt difficult to engage emotionally do the almosy monotone repetitive way he talks. His voice often made me zone out more than pay more attention.

All that said, this book is absolutely amazing, and my critiques notwithstanding, this book was well worth it. I will be buying the physical copy for note-taking, and also be sending this as a gift for a few people. Everyone in the 21st century should read this book.

Fantastic read, well written and presented. A must read for anyone interested in the issues currently plaguing our society

This book is a must read for anyone that wishes to see how easily manipulated we all are and how both simple and complex our ability to withstand brainwashing can be.
I like the readers voice but he made many mistakes in the reading of this book. Missing inflections, skipping words, stopping and starting again, frequently rereading a sentence.
Fortunately the content is still very strong..

It is amazing this book is so on point some 60 plus years after first being released. The chapter on technology may be more relevant than when it was written due to the influence of social media. Provides fascinating insight to how our society has reached the current state. There are parallels to both the so called left and the right here. Well worth listening to.

Chris Williamson is the absolute worst narrator I have heard in 30 years of listening to audio books. Despite the emotionally disconnected and childlike presentation; this is still one of the most important and interesting books ever written. Critical information in 2022.

I can't believe how well this book has aged. It's completely timeless and incredibly insightful. Read/listen to it now so you can be best prepared for what's to come.