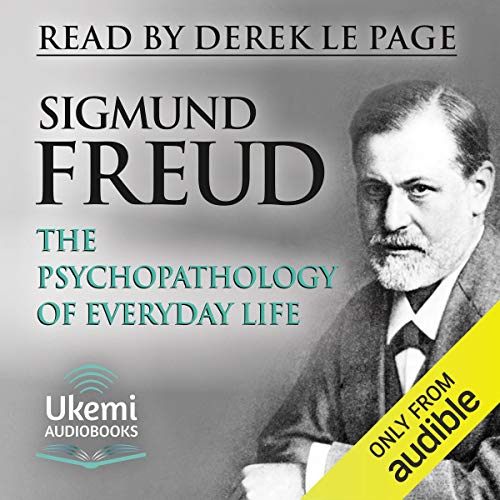 The Psychopathology of Everyday Life

By: Sigmund Freud
Narrated by: Derek Le Page
Try for £0.00

The Psychopathology of Everyday Life, which appeared first in 1901 and was then expanded in a series of subsequent editions, has proved to be one of Freud's most popular works, and one of his most influential during his lifetime. It was here that he proposed that many slips and errors of memory common to the average man in everyday life actually signals unconscious issues that beset the individual, and, if examined, can be extremely revealing. Freud opens the work with the following statement: 'During the year 1898 I published a short essay on the Psychic Mechanism of Forgetfulness. I shall now repeat its contents and take it as a starting-point for further discussion. I have there undertaken a psychologic analysis of a common case of temporary forgetfulness of proper names, and from a pregnant example of my own observation I have reached the conclusion that this frequent and practically unimportant occurrence of a failure of a psychic function - of memory - admits an explanation which goes beyond the customary utilization of this phenomenon.' This 'phenomenon' was a personal matter for Freud himself. He observed its frequent and varied appearance as an important tool in his psychoanalytic work. He analyses the subject through 12 chapters, including Forgetting of Proper Names, Foreign Words, Childhood and Concealing Memories, Mistakes in Speech, Reading and Writing, Erroneously Carried-out Actions, and Determinism, Chance and Superstitious Beliefs. The Psychopathology of Everyday Life is a key work in psychology and psychoanalysis, yet very accessible. It is presented in a clear and direct manner by Derek Le Page.

What listeners say about The Psychopathology of Everyday Life

Freud here talks about the cleverness of Freud and the rightness of Freud's ideas, while periodically congratulating the contemporaries of Freud insofar as they agree with Freud.

One of Freud’s classic and most accessible texts, in which he reveals the extent to which we are not in control of our thoughts and speech, even in everyday life, and which makes clear, perhaps more than anywhere, how Lacan arrives at his famous formulation of the unconscious as language. Lightyears ahead of modern psychology, which has done away with the notion of an unconscious continually at work, setting us right back to the misguided faith in rationally at the base of the enlightenment. In distinct contrast to this, Freud never ceases to remind us that what we take for our rational, thinking and speaking selves, is at best a mediator, or a censor, at worst a delusional attempt at self-mastery. As radical and unpalatable as it was in 1901.

Solidly narrated with a sensitivity that emphasises Freud’s insatiably inquisitive mind, not to mention his inventiveness and his unflinchingly penetrative gaze, even when turned on himself. This book reveals yet again how important Freud still is to a continued need for self-interrogation, alongside a humility and sensitivity to others in light of the fact that, when you hold open the possibility of an unconscious at work, we are all opaque to ourselves.

the study of Freud is absolutely excellent and the readings by Derek le Page, i just enjoy them. it is the best reading that i have seen from freud's books.

A flawless, intelligent reading of one of Freud's most charming and entertaining books. I enjoyed it immensely.

A+ on my college paper

Hi interest! The voice actor was prefect for this reading. The right tone, Freud is trying to be genuine and the tone added to that interpretation and when needed showed remarkable variation with guilt certain passages and the use of space set so no well

When I first saw it was 8 hours I was afraid how if you pause it doesn’t to it immediately but this dud. The volume was good and loud very clear quality

For the actual story wow Freud writing style is very dialogue and easy to listen to but do many examples of a phenomenon and it reads like a gossip or burn book then scientific. Freud likes to gain credit by siting he read a lot people’s work and then makes use of their research for his own reason OR says how stupid they are and how much better he is. He uses his own life experience so he really get to know him. He also see his boisterous attitude on everything. For anyone interested this is a good introduction to Freud as it is very relaxing listening to a great PR for psychology.