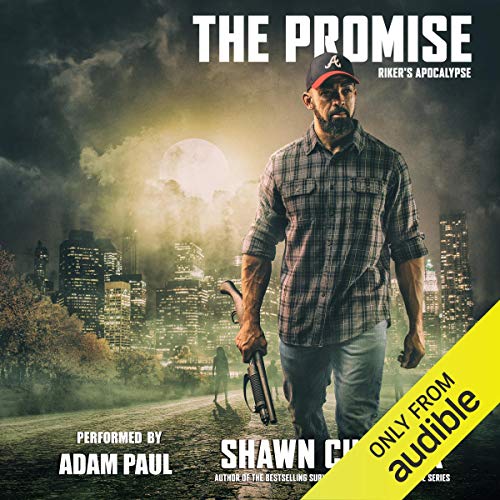 By: Shawn Chesser
Narrated by: Adam Paul
Try for £0.00

"Shawn Chesser is a master of the zombie genre." (Mark Tufo, best-selling author of the Zombie Fallout series)

"Through a combination of tight, well-structured plots and fully realized characters, Chesser has emerged as one of the top indie writers in the business." (Joe McKinney, two-time Bram Stoker Award winner and best-selling author of the Dead World series)

Army veteran Lee Riker is staying in an Atlanta shelter and supporting himself with the odd carpentry job when his sister, Tara, summons him home to Middletown, Indiana, for the reading of their mother’s will.

Hopeful that the unknown sum of money included in his portion of the inheritance will be sufficient to bring an end to his latest run of bad luck and trouble, Riker boards a Greyhound bus in Atlanta with his duffel bag, less than $200 to his name, and a secret he must protect at all costs.

Riker makes it to Middletown only to learn his sister has recently witnessed a gruesome death. Insisting she saw the victim rise from a pool of his own blood to attack the Samaritan rendering aid, Tara floats the idea that the man may have been a zombie.

While the siblings are comparing what Tara thinks she saw to the conflicting stories about the event being reported on the news, the emergency broadcast system is activated and they find themselves under order to report to one of three newly established quarantine centers.

With this unexpected turn of events looming over their heads, and as a result the reading of the will likely postponed indefinitely, Riker informs Tara of the promise he made to their mother on her deathbed months ago.

A promise whose details leave Tara nearly as confused as those of the grisly attack haunting her every thought.

A promise that Riker insists is worth ignoring the government edict in order to fulfill.

A promise that requires the Rikers to leave town even as shadowy forces seek to seal it off from the rest of the country - a tall order they soon learn will be easier said than done.

What listeners say about The Promise

This was an okay listen, not very exciting though, hopefully the next book will have more promise. I enjoyed all of Mark Tufos books and so find myself expecting the same calibre of writing, but no one has come close yet.
I gave it 3 stars as if its your first book in this genre you may enjoy it.

From the characters (3 main protagonists), to the narrator.. I simply could not stop listening to this book... wanting more and more

I loved the characters. The action was full on but it didn't affect the story line. I cannot wait for the next!

Great Book, ... what a Promise

Really Enjoyed this book, I had passed over Shawn Chesser stories because of mixed story reviews and bad reviews on the narration. Then Mark Tufo tweeted out how he highly recommend "The Promise".

Simply WOW, Lee is not a super soldier or spec ops warrior, Just a soldier. He was a little paranoid at times, as i found myself rolling my eyes, but once Shawn got past that. WHOA... a amazing story inside of a story

I am a fan now and can not wait for book 2
and will be giving his other works a another look.

3 reasons not to read

I listened to about 3 quarters of this book, but here are the 3 reasons I couldn't finish.

1. they are in the middle of a zombie apocalypse and the characters keep talking about getting tickets from the cops or going to the doctor on Monday morning. Like anyone would care about that when you have zombies chasing you!

2. about a quarter of the way in the characters get in a car and then they talk... and talk.... and talk... and drive a little, then talk.... after a few hours of just taking and sitting in the car I couldn't listen anymore. This is where the book lost me.

3. the writer uses the same phrase over and over in his writing, yes I get that they are reacting quickly but you don't have to say their muscle memory kicked in ten times, I get it!

The narrator did not make it easy to enjoy this book with his Clint Eastwood whisper voice for the main character. If the series continues, I hope he improves or it is a different person. The story line is a little hard to believe. This brother and sister know for a few days that zombies are coming and they do not warn anyone, nor do they prepare. They worry if their inheritance is dropped into their bank accounts, make jokes, and spread their mothers ashes. Just not a believable plot.

Outstanding story.
Outstanding narration.
Listened in one go. Start early, because this story grips you and does not let go until the end.
Highly recommended can't wait till the next in this series.

The story progresses too slowly and too verbose nd off point. Zombie apocalypse but then let's fly over NYC in a helicopter and land there to buy a truck. Really? No more from this author for me.

sick of the "wanna Be" Cowboy...
too much time spent on explaining trivial details, not enough time building the horrors of a dawning apocalypse.

Not what I was expecting

If you love zombies this may not be the book for you. While it was entertaining it was a bit slow for my speed. I'm not going to say zombies were absent from the read, but definitely not the focus. It never gave me the excitement I usually get from high stress zombie books... And that's because there wasn't a whole lot of action. Some of the earlier characters were irrelevant to the story in my opinion as well.

LOVED IT! Shawn Chessers writing combined with Adam Paul's narrative, enthralling. I really enjoy both reading and then listening! Can't wait for the next RA story!!

Was not what i expected, i wanted a action zombie book. What i got was a story about how a brother and sister brings there mothers ashes from point A to point B..

I tried, I got to about chapter 7 then surrendered I cannot listen to the narrator butcher the story any further. Story may have been fine, but listening to this narrator it's like listening to nails down a chalk board, so who can tell when all I wanted to do was yell, 'shut up.'. This is one book that is being returned. Sad since I really had high hopes for this book..