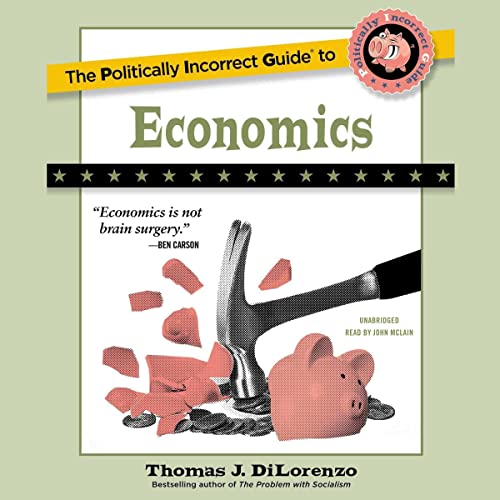 The Politically Incorrect Guide to Economics

By: Thomas J. DiLorenzo
Narrated by: John McLain
Try for £0.00

Another entry in the best-selling, irreverent, hard-hitting Politically Incorrect Guide series! Economics from a rational, conservative viewpoint—that is, a refreshing look at how money actually works from an author who knows the score, and how the law of economics are frequently broken and derailed by pernicious leftists and virtue signaling progressives.

Time to wise up. Think economics is the Dismal Science? No more! Here is the lowdown on the biases, superstitions, and outright falsehoods that permeate and corrupt economics and economic policy. Here’s the skinny on the poisonous effects of socialism and crony capitalism. Even better, here is an irreverent but clear-eyed explanation of how markets and economies work and how government intervention so often doesn’t, routinely makes things worse, and how it’s usually the cause of economic crises in the first place.

Here’s how the power of the free market bursts forth and conquers, despite the worms, leeches, slings and arrows of socialism and anarchy trying to do in human creativity and ingenuity at every turn. How the myth of so-called “market failure” is total bunk. Why every attempt by government to stabilize the economy seems to put it in a tailspin instead. How corporations cozy up to big government and use regulation to create monopoly profits. Why “stimulus spending” makes us poor and hands the power-seeking goons of the governing class even more control over our lives. Plus, here’s a chance to supercharge your economic IQ with concentrated wisdom from masters of market scholarship Ludwig von Mises, F.A. Hayek, Milton Friedman, and more!

A no-nonsense, irreverent guide to economics from a legendary teacher, thinker, and Mises Institute scholar that may be the best book on economics since Adam Smith visited a pin factory, figured out how the division of labor works, and wrote it all down in one handy volume!

What listeners say about The Politically Incorrect Guide to Economics

Yes, economics can be entertaining, especially when you are listening to the stories of just how corrupt and self-serving our institutions and politicians and the businesses in league with them can be. Wish I had this book when I took my own Econ classes some 40 years ago. Great read.

Another great volume in the 'Politically Incorrect Guide' series. Tom covered a lot of ground in a vast subject and provided important insights.

Will be listening to this again

This book is to the point, and I will be listening to it again so that I can absorb it thoroughly.