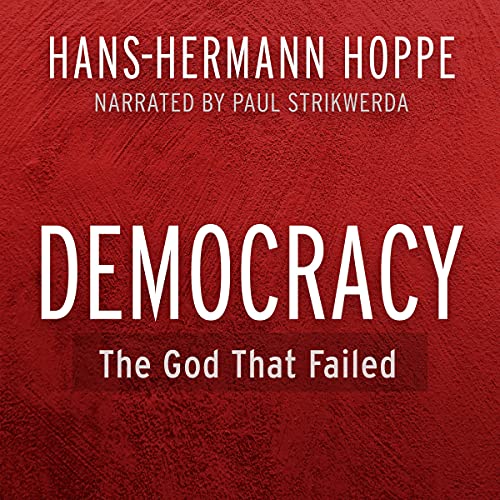 Democracy: The God That Failed

By: Hans-Hermann Hoppe
Narrated by: Paul Strikwerda
Try for £0.00

This sweeping book is a systematic treatment of the historic transformation of the West from limited monarchy to unlimited democracy. Revisionist in nature, it reaches the conclusion that monarchy, with all its failings, is a lesser evil than mass democracy but outlines deficiencies in both as systems of guarding liberty.

By focusing on this transformation from private to public government, the author is able to interpret many historical phenomena, such as rising levels of crime, degeneration of standards of conduct and morality, the decline in security and freedom, and the growth of the mega-state.

In addition, Hoppe deconstructs the classical liberal belief in the possibility of limited government and calls for an alignment of anti-statist conservatism and libertarianism as natural allies with common goals. He defends the proper role of the production of defense as undertaken by insurance companies on a free market and describes the emergence of private law among competing insurers.

The author goes on to assess the prospects for achieving a natural order of liberty. Informed by his analysis of the radical deficiencies of social democracy, and armed with the social theory of legitimation, he foresees secession as the likely future of the US and Europe, resulting in a multitude of region and city-states.

Democracy: The God That Failed is a brilliant and unflinching work that will be of intense interest to scholars and students of history, political economy, and political philosophy.

What listeners say about Democracy: The God That Failed

The equivalent of flat earthism

It is a pamphlet sustaining that democracy’s the worst system possible, without real analysis (see the correlation democracy/criminality!)
No doubts, no nuisances, just a passionate aggressive form of radical libertarian ideas, that others were more able to defend.
The reader is perfect in giving the prophetical and militant tone.
A thought that, probably without wanting, open space to fascism.
I tried to read for understanding better these ideas, but I waste time and money

Audiobook Chapter 11 is actually a repeat of Chapter 9

Terrific book. However, Chapter 11 “On the Errors of Classical Liberalism and the Future of Liberty” is not included. Instead, the audiobook repeats Chapter 9 and then goes straight to Chapter 12 as the next chapter on National Defense. Perhaps it is included later but I wanted to write this review just in case I forgot.

One of the best modern books explaining liberty in all aspects of life, economics and government. Definitely the pupil of Rothbard. Really gets the ol' noggin' joggin'!

Dr. Hoppe does a terrific job presenting the material of this book. I want to thank the Mises Institute and Audible for bringing this great title to us...many, many thanks!

This book lays out the fundamental problem with Western Civilization as well as the solution.

Great book unless you're multitasking

This book was very thoughtfully written. Every word was measured and placed by a scholar. The ideas in this work are controversial in modern discourse, but Hoppe pulls no punches. You will find that while you might not agree with every point the author makes, each idea expressed is carefully constructed. His arguments cannot be dismissed as illogical, they must be individually disproven, accepted, or carefully contemplated.

A lot more unexplained leaps of logic than I was expecting.

The author appears to be contrasting 20th century western democracy with some imaginary, perfect form of monarchy, or at the very least a monarchy that existed within one dynasty in a narrow window of time in Central Europe. He seems to also tout a circular definition of “moral degeneracy”, and doesn’t give much explanation of how an anarcho-capitalist society wouldn’t just descend into a Mafia state.

The biggest red pill I read about politics, economy and democracy. This book changed my understanding of the thing I never considered before.

fell in love with the authors work and ideas after reading the sovereign individual. wanted to read more.

Having grown up a staunch supporter of the American constitution and the natural rights of man that it claims to protect, I listened in amazement as Hoppe rewired my brain and and changed my mind on my most strongly held opinions. His work has taught me how to truly analyze my state of being as it relates to society and to the government. Overall, the narrator's performance was good, except for some instances where the words were muddled and the meaning was lost. I gladly purchased the paperback version to clarify these areas, and will keep it as a reference.