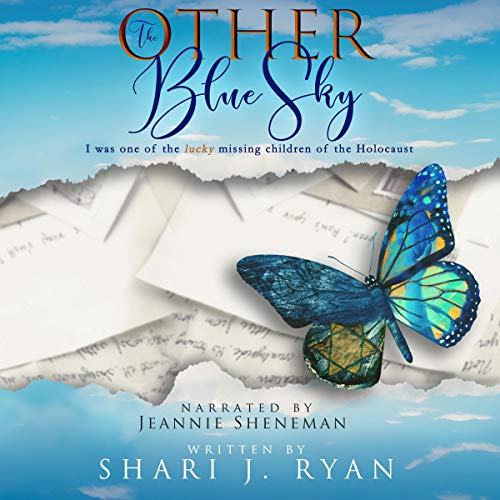 The Other Blue Sky

By: Shari J. Ryan
Narrated by: Jeannie Sheneman
Try for £0.00

Very few people can say they were born inside a concentration camp during the Holocaust. Disease, starvation, and much worse, prevented most prisoners from surviving. For infants, it was nearly impossible. I became an anomaly. I shouldn’t be alive.

As a child, I didn’t know my life was different from that of others. I had nothing to compare it to, and I had no insight about the day I was born...until the moment I overheard the truth.

In a split second, I became a stranger to my reflection, my name, and my reason for being. I was not Annie anymore, and the people raising me were not my parents. Even the blue sky I cherished became an unfamiliar sight. I felt utterly alone in a foreign world, but that changed when I met another person who was lost, like me.

Fisher offered his hand to hold and began to prove his theory of, “When two missing people find one another, they can consider themselves found.” Fisher enlightened me, and through him, I gained a deeper understanding of life.

Now, I know there are two sides of the beautiful, blue sky. I’m on one side, and my lost loved ones are on the other, but at the end of it all, we’ll be together again under the one and only sky.

What listeners say about The Other Blue Sky

This book was well researched and I love the format of “present to past and back” format. This story was very engaging and hard to put down.
I especially enjoyed the way the narrator added to the story. Her voice is extremely easy to listen to, and her accents of the different languages are well done. A good narrator is almost as important as a good author. I have stopped listening to books that the narrator’s voice is hard to listen to. I would like to listen to other books narrated by Ms. Sheneman.

This is Annie's powerful and moving story of a Holocaust survivor. We first met Annie in Last Words, learning how as a baby, she was rescued heroically from certain death, and eventually came to the United States to be raised in a safe and loving home. As a teen, she overheard a conversation that caused her to question and doubt all that she knew. She felt lost, and alone, not sure of her place in this world. As she set out, in a dangerous time, to find her truth, she will find a strength she didn't know existed. My heart broke at times for Annie, her Mom, Fisher, and her whole family. The lessons they learned were not easy, but love, peace, and strength could be found in the simplest places. This poignant journey is so gripping, heartbreaking, but also hopeful and healing. It sinuously moved from past to present, weaving a tale that kept me engaged and my heart racing. The emotions it made me feel, from laughter to loss, horror to joy, and everything in between is the reason I love to read/listen. This story touched my soul and reaffirmed that even the smallest of life's gifts deserves appreciation. I absolutely loved and swooned over Fisher, he is the perfect book boyfriend/husband! It was also so much fun catching up with Annie's family, including Charlie and Amelia, they were so adorable together.
Narrator Jeannie Sheneman is so compelling as she brings this story to life. Not only is her voice easy to listen to, but her accents are so amazing that it makes this story even more real and honest. Her intonations are spot on, and she makes me feel all the myriad of emotions that Annie and her family experience as they discover all the secrets, loss, and love throughout their lives. This is the first time that I've listened to her work and I can't wait for more from her. This is storytelling at it's absolute finest and I loved every moment of this beautiful, raw and emotional journey!

Before you spend a penny on this book or waste a second reading it, “Blue Sky” refers to the main character’s son, named Sky, whom his parents enduringly refer to as “Blue Sky” because he turned blue as he was dying.. How adorable!