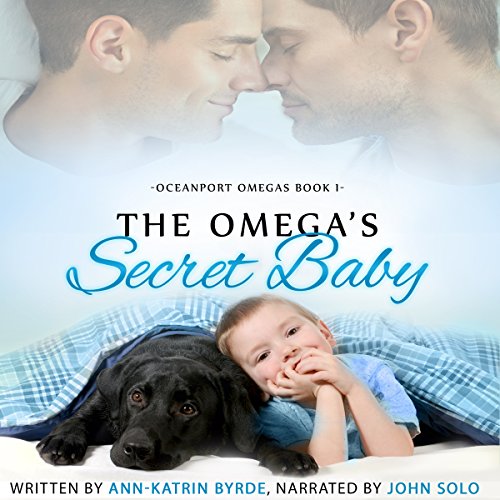 By: Ann-Katrin Byrde
Narrated by: John Solo
Try for £0.00

Eight years ago, Eli gave up his future as a veterinarian because of a blue line on a pregnancy test. Now a single dad to the best little boy in the world, he's working at an animal shelter and trying his hardest to ignore the small town gossip that follows him and his son around. Contrary to popular belief, he does know who the other father is - the irresistible alpha from his youth. But Matt's upper class family doesn't think an omega is good enough for their son, and Eli's not going to expose his kid to that kind of prejudice. Besides, Matt ran off and married someone else, so he couldn't have felt that much for Eli, could he?

After years of trying to make his arranged marriage work, Matt's getting divorced - much to his high society family's dismay and fury. And his relief - something had to change. It does, when he runs into the omega he'd fallen for as a college senior and never quite managed to forget. The moment he lays eyes on Eli, he wants him back, and to hell with what his parents think.

And there's that little boy, Eli's son, who tugs on Matt's heart as hard as Eli does. Could it be...?

What listeners say about The Omega's Secret Baby

The narrator was able to mimic a whole set of different voices for each of the characters with accurate consistency which rendered the whole experience quite realistic.

I liked the storyline and the characters. The main guys we're funny and angsty and the side characters we're interesting I am looking forward to Griff's story! I really enjoyed the ending! It was sweet and tender and heartfelt.

Eli is an stigmatized omega, he has a son who is an Alpha but he gets to listen to people misjudge his dad. Matt left a long time ago to marry his designated mate, but he has a true mate who still loves him. It’s a convoluted kind of love but once Matt decides what he really wants, even his stuffy parents can’t decide for him anymore. Love the narrator, and the story.

What a great Mpreg book, extremely well narrated by John Solo, but more importantly we'll written and lovely story.
The battle between Omegas and Alphas and the condescending family of the alphas and members of the town.
But love also wins in the end, or it does is fictional books. Well worth the read or listening to.

I love second chance love and this was a great history about secind chace love.

I love Matt and Eli!

I fell in love with both Matt, Eli, the adorable Jake and Eli's brother Griff. I would highly recommend this book and would love to see Griff find his happily ever after!

The story is like a mix of a Harlequin and a mpreg book. A perfect bit of sweetness in these trying times. Voice performance was excellent.

If you could sum up The Omega's Secret Baby in three words, what would they be?

What was one of the most memorable moments of The Omega's Secret Baby?

When Eli finds out that he's a father :)

Have you listened to any of John Solo’s other performances before? How does this one compare?

No, but I really enjoyed his voice.

I read this book last year, it was fun to hear it come to life. Great experience :)

Just a cute, fluffy light read without a bunch of angst involved, I really did enjoy this book and the audio for it. The storyline itself was interesting to me and seemed on the more realistic side, like the events in the story could actually happen, (ya know besides the whole alpha/omega Mpreg stuff). I also liked the small town feel to it, I cant wait to see what else happens in the town of Oceanport.
Omega Eli, has spent the past 7 years struggling to raise his son alone with the help of his brother, after the Alpha (Matt) he spent some time with during a break in his first semester of college took off and married someone else. Alpha Matt comes back into Oceanport after his 8 year marriage ends in divorce and happens to see his old flame Eli again, with a kid, around the age of the time he and Eli spend apart from each other.... After Matt and Eli reconnect old feelings arise and they make a go of trying to become a real family together. They just need to overcome the small town gossip, work issues, and some outrageous family drama to make it work. <spoiler>The only thing that kind of bothered me in this book, which I didn't even notice until I listened to the audiobook (I have previous read this EBook) was the overuse of the wording "The Kid" not "my kid" not "his kid" they didn't even use their kids name often. When Eli and Matt were discussing their son Jake, it was always as "The Kid". It didn't take away from the story and I didn't even notice when I read the book, but it did bother me by the end of the audio, and maybe it's just me overthinking it as well, I don't really know??? </spoiler>
Audio - I liked this book in audio, it was a really cute narration of the story and the narrator John Solo did a great job with Eli and Matts voices as well as making sure Jake sounded like a child as well since he was also a big part of the story. I cannot wait to hear how he does with the next books in this series.

This is a really cute and sweet second chance romance. Matt is finally ending his arranged marriage and when he runs into Eli, the omega he fell for in college, all the old feelings come rushing back. Eli gave up his future in order to raise the son that Matt doesn't even know about yet. Eli has raised their son on his own with help from his brother and he's not sure he can trust Matt to stick around when his family is against them. I loved watching them reconnecting and rebuilding their relationship throughout the story, not only with each other but with their son as well. The narration was really good. The narrator did a good job with all of the character voices and bringing the story to life.

I enjoyed this story as an ebook but thoroughly loved it as an audiobook. The performance by John Solo was spot on.

Eli and Matt get their happy ever after!!

Eli had a rough time raising his son, alone. He made a mistake a long time ago and he has the guilt on his shoulders, of his son paying part of that price. He didn't tell his son's father that he was pregnant and while that didn't guarantee that he would have Matt by his side, he would have been in his son's life. When Matt comes back into his life, Eli isn't sure he will survive letting him back in and loosing him. As Eli and Matt navigate their feelings and desire, they also have to figure out how to explain it all to their son. I really enjoyed reading and listening to this story. The narrator did a great job with all of the voices and i could tell when it was a different person.

hit all the boxes for a really good book

this book has everything that makes a very good read for me. sweet yet sexy story, well developed characters, and an amazing narrator to bring it all to life for me. will be buying the next one in this series for sure,

Now I love Ann-Katrin Byrde's books. So I was happy for the audiobook. This is also the first time I have listen to John Solo. I have got to say that he does an amazing job. John just brings these characters to life and I couldn't be happier. If you love audiobooks and you still haven't read a book by Ann-Katrin Byrde. You need to pick this one up. Such a cute story and the narration just makes it so much more!

Such A Cute and Funny Story!!!

The narrator did such a wonderful job!!! He made it very fun and this story is one of the best I've ever listened to! I hope to have more from Ann Katrin in the future, as I'll burn through their published works pretty fast!!

I definitely recommend this book to anyone who appreciates this type of genre! Mpreg, ABO dynamics are some of my favorite kinds of story and this one was done exceptionally well!

Enjoyed the beginning of this new series

God Matt's family was just horrible. Why couldn't they just have been happy for him. After all Eli went through, I was so happy to see them finally get what they both deserved.