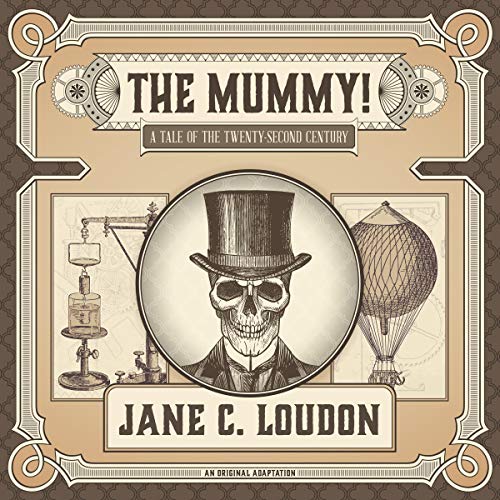 Published anonymously in three volumes in 1827, when the author was only 17 years old, The Mummy! is, as she describes it herself, a strange, wild novel that - "to an audience nearer her future than when Loudon imagined it" - is filled with striking similarities to our modern world, including a form of the internet. But it is also filled with brilliant flights of fancy: Her court ladies wear hair ornaments of controlled flame; surgeons and lawyers may be steam-powered automatons; people holiday by moving their entire home on rails. The visionary technological setting contrasts with a morality seemingly gone awry as it falls to the reanimated mummy Cheops to try to find a role in this corrupted society.

A lost curio of Victorian futurism waiting to be discovered, The Mummy! is as bizarre and entertaining as its premise promises - and more. Its present-day appeal to fans of steampunk and Victorian settings is undeniable.

This full-cast Skyboat Media production, adapted and produced by Gabrielle de Cuir, is the perfect vehicle to fully exploit Loudon's sophisticated visionary narrative, and contrast it with scenes of vivid character dialogue.

What listeners say about The Mummy!

It's a fascinating early Victorian Steam-punk, Sci-fi, Gothic romance with an Egyptomania interest that's WAY ahead of its time. Even if it definitely owes a debt to Mary Shelley's Frankenstein and Last Man - as well as Fautian stories and MacBeth - it's still wonderfully inventive. It does get a little inconsistent and rushed towards the end (and the whole Seville war section could have been cut out with nothing lost), but I still loved it overall. A neglected gem. So I'm really glad that someone's created an audiobook for it. But the performance is... mixed. The main narrator is pretty good, but the accents of the cast are often hilariously bad. And the audiobook incredibly misses out the final chapter!! It just stops. I can only presume it's a ludicrously sloppy production error. So I have to take it down at least a star for that.

Fab hidden gem, this is abridged from the actual book which does make it hard to read and listen at the same time, but most of the abridgements are “she looked up”, “he yelled” etc.

I'm a diehard sci-fi fan; including obscure historical stuff. At first when I read the description, I thought they were making up the author's provenance. But, no, she really WAS a 17 year old girl in the 1800s who was the first to novelize a resuscitated mummy. C'mon. Really? Anyway, this is a fun multi-voice production of her novel. I loved The Mummy being a tuxedo wearing bon vivant lounging on London society couches. I loved the flying machines and the clothes and the very steampunk aura of the piece. The production is in the hands of some very solid narrators and I enjoyed every convoluted minute of this book.

If you like long winded tales along the lines of Pride and Prejudice, this might be for you. It just could not capture my attention. Maybe it gets better- I couldn't stand more than 20 minutes of it.