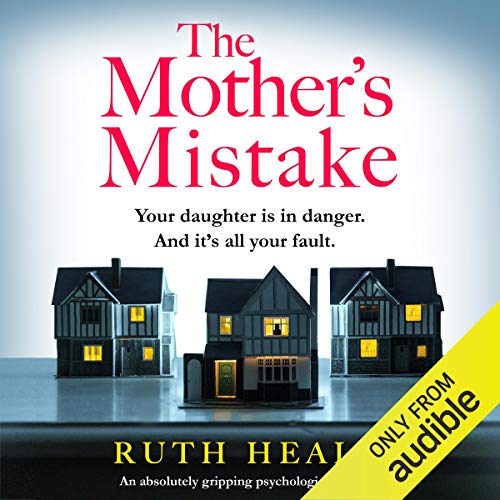 By: Ruth Heald
Narrated by: Tamsin Kennard
Try for £0.00

Everyone makes mistakes. But does everyone deserve to be forgiven?

She runs past the tinkling of children’s laughter that fills the park. Heart hammering, feet stinging, she reaches the riverbank, her breath catching in her throat. And then she sees...

Claire has everything she’s always wanted. A newborn baby. A doting husband by her side. A picturesque home in the countryside.

But behind closed doors, Claire’s life is falling apart. Her husband is barely ever home, she’s struggling to bond with her baby girl, and she swears that she is being watched in the remote, lonely cottage.

And when a threatening note is posted through her letterbox, saying she doesn’t deserve her daughter, it’s clear that someone knows about the terrible mistake that Claire made - someone won’t let her forget it. Three years ago, she would have known who to turn to. But now she no longer recognizes those closest to her or the person she’s become. Whom can she trust?

A chilling psychological thriller about a mother’s worst nightmare. Fans of K. L. Slater, Shalini Boland, and The Girl on the Train will love the twists, turns and gasp-worthy shocks of this stunning debut from Ruth Heald.

What listeners say about The Mother's Mistake: An absolutely gripping psychological thriller

I’m normally 3 steps ahead guessing the ‘who did it’ well before the clues come but this book really kept me wondering. Extremely well written

Returned this one, it just seemed very similar to another I listened to! the usual, woman suffers from depression and flashbacks etc etc

Absolutely loved this book from beginning to end. I was glad of miserable weather so I could shut myself away and binge, I really didn’t want to talk to anyone or be interrupted.
The one and only criticism I have is , surely you can’t be an ex alcoholic or used to be an alcoholic ?
I shall definitely look out for more books by Ruth Heald

Couldn't put it down kept me guessing till near the end. Will look for more by this author

I couldn’t stop listening to this book, it had me gripped from the start.
Stayed up till 4am to find out how it ended! A fantastic read!

loved the story. very dark and definitely gripping attention till the very end.

I was hooked by this story from the first chapter.
Claire, Matt and their baby Olivia leave London for a fresh start in the country. They are staying in Matt’s deceased Grandmother’s cottage having been invited by Matt’s mother Ruth. Claire has been struggling to bond with her baby daughter and hopes that their new life in the country will help. What should have been a wonderful new beginning turned into a huge disappointment. When they arrived at the creepy cottage it was dirty, dusty and cluttered with the deceased woman’s belongings. Ruth promises to clear the house but never quite manages it despite letting herself in uninvited when ever she pleases. She is very critical of Claire and Matt seems incapable of standing up to his mother. This is not the warm welcoming family unit that Claire was expecting. Matt is setting up a new Vet practice and is rarely home, he spends far too much time with a colleague and when he is home he does not help with Olivia. Claire feels isolated and alone, she is struggling with post natal depression and receives no support from her husband or mother in law. She does make a local friend, Emma who soon becomes her only source of happiness.

But Claire once made a huge mistake and she is wracked with guilt. It is hinted at throughout the book and is finally revealed in the last few chapters. It was a relief to finally work out what had been going on! A great suspense story.

I loved this book. I was on the edge of my seat right from the very beginning trying to work out if this mother was going mad or if someone was really out to get her. I kept changing my mind and shouting at her to get out and run. I was not disappointed at all with this story and couldn’t wait to find out the conclusion.

I dont know how many times 'tears threatened to prick her eyes' l lost count after 7, this got so annoying as did her pronunciation of 'olivia-r' and 'Emma-r' why does everything ending with a vowel have an 'r' on the end !? The story could have been better if the narrator wasnt so twittery emotionally over the top with every sentence. I couldn't finish it. Just a mess really.

Great book, but not dark enough for me...

I'll be honest - when I purchased this title, it was mostly because I saw the "not for the faint of heart" review, and it got my attention. (Turn me upside-down and call me twisted.)

It really is a great listen; the narrator is great, the storyline is interesting, and I actually wanted to finish it.

This review is more for those weirdos like me who are in search of a, "Wow. Ew.....no. NO. NOOO. I can't believe this author really went there. NO....okay, I'm in." type of book. This isn't that book.

Now, if you ARE one of those faint of hearts who like a thrill - get it. It's a great listen. (And nothing that you couldn't listen to in front of your grandma.)

If you can stand to listen to complete hysterical paranoia for hours on end to FINALLY get to the end of this book, cheers to you. It was very aggravating to me after about 1 hour of listening to the main character. I was able to figure out who the villain was pretty easily. I do not recommend this book and am so glad I am done with it.

Haven't Been So Shocked By A Book in Awhile

This was incredible--worth it to the end!! I didn't believe the person who said that in the review. But they're right; amazingly done... she pulled every last detail together.

I have never written a review before on a book, but I was compelled to review this book by Ruth Heald. The performance was absolutely wonderful. The story had a twist to it that I was not expecting at all. I kept you on your toes the whole time, and the ending was amazing. I don’t know how Ruth was able to pull this story together, but she did a great job! I would highly recommend this book for people that like Psychological thrillers.

I really, really tried to finish this book but found myself so utterly frustrated with the repetition of poor decisions and obvious outcomes that I just couldn’t persist.
Narration was good.

I wasn’t sure I would like this at first, but was pleasantly surprised. Even though I thought I’d had it all figured out (don’t we always??) the ending was brilliant! I recommend this to every psych thriller out there!

A little long but GREAT!

Just when you think you’ve got it figured out too easily..... WRONG! Great twists even with the length in the long run!!

was so confused it made me mad

wtf? horribly whining woman the whole time (not the narrator but the main character) confusing and was glad when it ended

Could not finish it

The story drags on and on. It is not a thriller it’s a bore and has no end in sight.

I’d swear Audible makes its own review. Time after time I buy a book based on good reviews and it turns out to be terrible. This book was another total dud. Repetitive. Went on and on with no real story. It was annoying as heck that nothing ever happened other than the same ol same ol situations. Couldn’t wait for it to end.