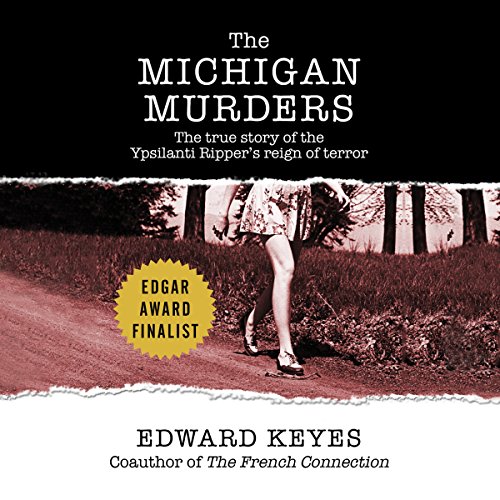 By: Edward Keyes
Narrated by: Pete Cross
Try for £0.00

In 1967, during the time of peace, free love, and hitchhiking, 19-year-old Mary Terese Fleszar was last seen walking home to her apartment in Ypsilanti, Michigan. One month later, her naked body stabbed over 30 times and missing both feet and a forearm was discovered on an abandoned farm. A year later, the body of 20-year-old Joan Schell was found, similarly violated.

Over the next two years, five more bodies of female students were uncovered around the area. In the wake of these murders, southeastern Michigan was terrorized by something it had never experienced before: a serial killer. But after multiple failed investigations, a chance sighting finally led to a suspect: an all-American boy studying elementary education at Eastern Michigan University who wasn't all that he seemed.

What listeners say about The Michigan Murders

In 1967, a 19-year-old EMU student was last seen walking home to her apartment in Ypsilanti, Michigan. A few weeks later, her violated, naked body was found on an abandoned farm. Over the next few years, six more bodies were discovered, leading the police into a murder investigation that would taunt them with a maddening lack of evidence, suspects or the slightest clue as to who the killer might be.

Though I also have the paperback version, this review is based on the audiobook, which is superbly narrated by Pete Cross. First published in 1976, this is a fascinating account of a series of murders that terrorised Ypsilanti and Ann Arbor in the late sixties. The details of the crimes, particularly relating to the difficulties and frustrations of the police investigation, reveal a well-researched and skilfully told story of how one man almost escaped capture simply because he was exactly what the authorities did not expect – an intelligent, clean-cut all-American guy.

The story held my attention from start to finish and had me rooting for the cops through all their defeats and dead-ends. My only grumble in terms of the writing, is that the author chose to change the names of not only the victims and their families, but those of several witnesses and even the person responsible for the killings. While it may have seemed an understandable courtesy forty years ago, for anyone wishing to do further research now, it’s a bit irritating.

That aside, provided you have a strong stomach (there’s lots of gory detail), this is an enthralling book that’ll appeal to anyone who enjoys true crime.

One of the best true crime stories I have listened to.

I read / listen to many true crime stories. This has to be one of the best. It has been meticulously researched and extremely well presented. Five stars from me.

Intriguing yet mildly laborious at the end

Strong performance and a story that locks you in. That is, until the trial, when it gets mildly laborious and technical. Too much detail when you want the author to cut to the chase. There it loses its narrative fabric but gets back on track at the very end.

Great book and great narration. Loved it. Listening to it again, great for driving to ;) Thankyou.

choice of narrator excellent. considering the nature of the crime, story well compiled. A must audio book.

Great narration, thoroughly enjoyed this true story. I recommend this audio book to my one who is into real crime.

Why did I waste a credit on this rubbish? Why did the author give anonymity to a convicted murderer whose real name has long been in the public domain? Why was the book so long and yet lacked any depth? Why did he waste time writing it?

The story never once diverted from a linear direction. From the first murder up until sentencing, well maybe a brief discription of a victim's past was all. Performance was OK but the Dutch psychic sounded more like a Russian baddie from a Bond film.

Give It Some Time

In all honesty, 10 minutes into this book I wanted to return it- I am not sure if it was the narrator or the story, but I was on a long drive and so I pressed on- Somewhere along the way the book just took on a life of its own- I was truly fascinated with the story, the police work, the beginning of forensics, and of course the amazing twists that happened ! Very glad I let the book develop on its own-

Some stated they did not enjoy the narration but I thought he did a great job. Even knowing the crime this book keeps you locked in! So interesting, I would recommend this for anyone wanting a true crime book or even just a good book in general.

narrator was great. the story line is woven so well it keeps you eagerly waiting for more. this is told not from the family of the victims view bit is still an awesome book

I have nearly 160 books in my Audible library and to me, this is one of the best titles that I own. Of those titles, I can count on one hand the titles that I have listened to twice and this is now one of them. I may even listen to it a third time. The amount of research that was done to put this book together is impressive. Good stuff. I highly recommend.

A graphic, chilling account of the murders that gripped southeast Michigan from 1967 to 1969. Names have been changed, but those that lived in the area know which murders are covered in this book. Some details are very shocking.

Yes- The writing is excellent. But I picked the title because of the narrator and was surprised by the negative reviews about the narration. He’s smooth, even, doesn’t do annoying voices for different characters... worth a listen.

This book was well written with great narration. I appreciated that the names were changed. It was a little drawn out, but I liked that it was detailed and in chronological order so it was easy to follow.

narrator is hard to listen to

I expect better quality narration. interested. but just had to return it after trying to listen to just one chapter.

The narrator is not correct for true crime. His voice is fine for romances or self help but Michigan murders was not to be read with a smile or light, haha tone. very disappointed in the lax of the narrator

I found the changed names very difficult to keep straight. As someone familiar with the case and it's history, the new character names