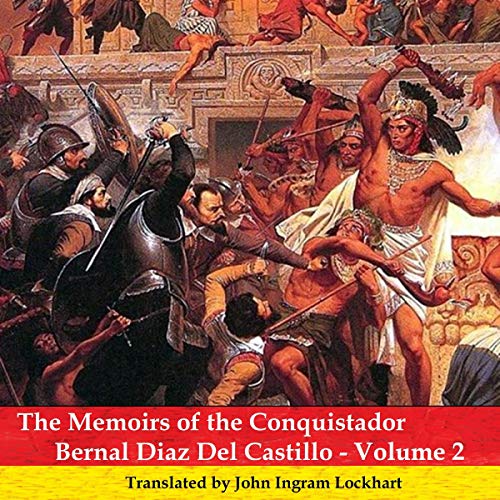 Continue the journey through the history, adventure, tension, and dangers faced by the Conquistadors, led by Hernan Cortes - the Alexander of the Americas - as they continue their epic tale of conquest against the Mexican Empire.

After Cortes' expulsion from the Mexican capital on the much-lamented Night of Sorrows, the Conquistadors are reeling and their alliances crumbling.

Hernan Cortes, unbowed and undaunted, refuses to give up the fight and determines to stay the course of the war against the Aztecs, and his own countrymen, to its bitter conclusion.

The Aztecs themselves, flushed with their recent victory and completely rejuvenated under the new Emperor, specially selected to wipe the Spaniards from the face of the earth, make preparations for the ultimate battles to come.

This memoir is an autobiographical account of the events as eye-witnessed by Bernal Diaz - a Conquistador on that journey. The young man from Spain desperately hoped to carve out a life of riches for himself in the new world and instead found himself on an epic journey of conquest, while desperately fighting to stay alive, in previously unknown and unimagined lands.

This is a true tale written in his own hand and translated into English. It is a gripping account of the events from the soldiers' viewpoint as each day becomes a battle for survival against incredible odds and could easily be mistaken for a work of fiction. Each chapter is rich with jaw-dropping details of the journey into that world. A journey that has long since been forgotten and can now be rediscovered.

What listeners say about The Memoirs of the Conquistador Bernal Diaz del Castillo: Volume Two

loved it, a absolutely sensational diary of the heroic conquistadors glorious conquest of the Americas.

Amazing first hand account of the conquest of Mexico!

The narration is a little stilted but the story is riveting. Bernal Diaz’s first hand account of the first encounters with the Maya and Aztec cultures is amazingly frank and authentic. As usual, history is so much more complex than what we think.

I enjoyed listening to it so much I felt I was teleported back in time. It’s so worth the time I can price this enough.

A foot soldiers telling of the actions taken by the soldiers and natives upon arrival and their first impressions of the clash of cultures from both perspectives. The cavalier attitude of superiority to that of the Indians and expectations of servitude by women and natives alike. They were appaled by the human sacrifices but do not bat an eyelash when it came to hanging, burning at the stake, and lopping off limbs for punishment. Interesting paradigm through the eyes of a Spanish Conquistador.

I love the style in which this book is written and read. Bernal Diaz was a soldier and does not waste time with trying to embellish his stories as he writes in a very direct style that conveys meaning and happenings with minimal chance for misinterpretation. I also enjoy how he Knocks on another historian of the time who HAS embellished stories and given all the glory over to Cortez. overall Bernal Diaz is one of humanities heroes both by feat of arms and through his service of narrating history as it happened.

the narrator is quote enjoyable as they speak clearly, at a good pace and in a voice that sounds like a old time-y hardened veteran.

I love how the writer makes one feel as though the listener is there experiencing these historic events himself.

This was a high quality narrative of the conquest of Mexico and beyond. Good to combine with other books of same topic. I liked Bernal's seeming sincerety. Good narrator also.

first hand accounting of events. quite surprising at times. how these noble men suffered.

exceptional insight and a true narrative by a Soldier who was there and was true. to his honor and word a true Caballero