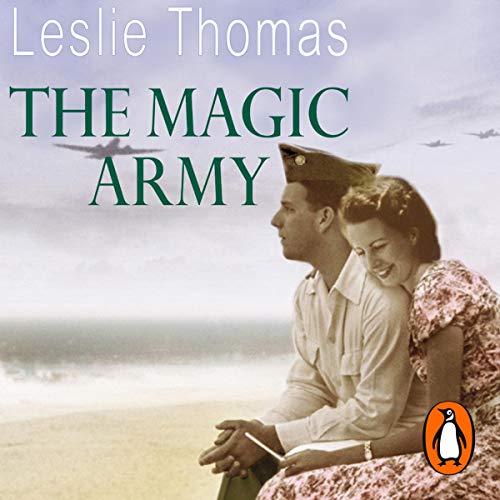 By: Leslie Thomas
Narrated by: Martyn Read
Try for £0.00

The war, they said, would be over by Christmas. That was in 1939, and it is now January 1944. An exhausted Britain faces another year of conflict.

Meanwhile, small coastal villages in Devon are facing an invasion from an army just as foreign as that of the Germans. The Americans are smart, well-fed and well-equipped, and they have swept the bewildered citizens of South Devon from their homes in deadly earnest rehearsal for D-Day.

As the beaches echo to the sound of bullets and the local church to the strains of Glenn Miller, Americans and English are thrown together with sometimes hilarious, sometimes painful and puzzling results.

What listeners say about The Magic Army

old style writing at its best

What made the experience of listening to The Magic Army the most enjoyable?

Leslie Thomas writes in a style that can easily be put down and picked up again at a later date. The plot is simple but for persons of a certain age believable, a past way of life.

What was one of the most memorable moments of The Magic Army?

The captain of the transport boat after being injured epitomises the "stiff upper lip" of the time.

Which character – as performed by Martyn Read – was your favourite?

All in their way.

The loss of the boy when his curiosity with the grenade blew him up.

A great listen or read that is quite compulsive.

Puts you in the picture

Where does The Magic Army rank among all the audiobooks you’ve listened to so far?

The Magic Army is part of Leslie Thomas' effective trilogy about the way that World War II transformed even civilian society in Britain. I first read this book (together with Dearest and the Best, and Dover Beach) nearly thirty years ago. Now, I can see even more of how Leslie Thomas showed what a watershed our first contact with the US (through the arrival of GI's in the run-up to D Day) became.

The story centres on the US Army displacement of villagers in Devon, as the military set up training camps for Operation Neptune. A war novel centring on the US invasion of a part of Britain shows many unexpected aspects of how the war experience changed even home life.

What does Martyn Read bring to the story that you wouldn’t experience if you had only read the book?

The novel must be a nightmare to read. The British characters are nearly all West Country folk, but the Americans hail from Philadelphia, New York, Connecticut. Martyn Read keeps the drama seething, and the humour bright - and gets near enough with most of the accents.

When the American Army invaded Devon.

The section about the US general's first encounter with Yorkshire Pudding, and Brussels Sprouts, is some of the finest comic writing of the later twentieth century.

The subject matter is fascinating - how the army (American and British) cleared out a town so that they could practice their war manoeuvres. However I am now 8 hours into the story, have no affinity to any of the characters and am struggling to keep any interest in it. The narrator is also disappointing - perhaps not the best choice given the accents he is using in the narration. However every now and then there are sections which are a fascinating insight into life at that time - however not enough to make me sure that I will ever finish this recording (a first!)
Summary: find a different source of information for this interesting subject.

For the first time ever I am not sure I will finish listening to this book...while it has its moment where my interest is captured they are few and far between...