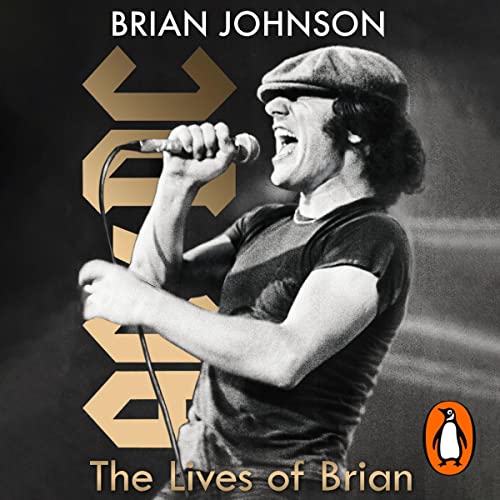 The Lives of Brian

'It wasn't me. I didn't do it. And I'll never do it again!' says Brian Johnson of The Lives of Brian. That AC/DC's legendary front man got to do it all is one of the most cheering and entertaining stories in rock 'n' roll history.

The son of a British army sergeant-major and Italian mother, Brian grew up in Dunston, Tyne and Wear, as it emerged from the shadow of the Second World War. Then he saw Little Richard on the BBC and it changed the course of his life.

The choirboy and cub scout was going to be singer.

For over a decade he tried to make his mark with a succession of bands. He appeared on to Top of the Pops, toured Australia and yet the big time looked out of reach. Then he was invited to London for an audition for one of the world's biggest rock acts. AC/DC were a band in crisis following the tragic death of their lead singer, Bon Scott, but with Brian on board they would record their masterpiece: Back in Black. It became the biggest selling rock album of all time. The tour that followed played to packed out arenas. Quickly embraced by the band's fans, the new boy had earned his spurs. But there was to be a twist in the tale. In 2016, Brian was forced to quit the band after being diagnosed with hearing loss, only to make a triumphant return to the band he loved with the release of 2020's smash hit album Power Up.

It's been a rollercoaster of a life, throughout which Brian's kept his feet firmly on the ground, never losing touch with his roots.

Warm, vivid, evocative, life-affirming and often laugh-out-loud funny, The Lives of Brian tells the story of one of our most well-loved performers in his own inimitable words.

What listeners say about The Lives of Brian

Not enough of what we wanted to hear about!

I love the guy but out of 24 chapters, he doesn't talk about AC/DC until chapter 19 and once he does get into it, it's a far too brief account of the audition and then recording of Back in Black, zero stories of any touring or any other albums etc. It was interesting to hear about his childhood and background but let's be real, the reason we bought the book was to hear about the behind-the-scenes of AC/DC! Still an enjoyable read, he's as likeable as ever but was just left wanting a lot more.

If there was more, I’d keep coming back for it!

Engaging throughout and left me wanting more and more. Absolutely perfect to have Brian reading this himself. So much personality and passion. The most likeable guy. I’ve listened to a whole load of audiobooks but this is something else. A must for any fan of Brian or AC/DC. I really hope there’s more where this came from!

great story of a varied life.

I have loved listening to Brians Story. I've known of Brian for years, but nothing of his life. coming form Newcastle, I know all the places he talks about and brings back happy memories of my youth. I would recommend this book to anyone.

This is just the best audio book I ve heard, Brian has a great sense of humour and that comes across so well in the book. It made me laugh, it made me cry and it made me realise what a great bloke he is. Loved the stories of the north east working men's clubs having experienced those myself as a semi pro musician. He could've been a comedian but then we would've missed one of the all time great singers in rock n roll. God bless you me son!

This book will leave you thunderstruck...

The Lives of Brian by Brian Johnson. "He is not the messiah, he is a very naughty boy," but he is ultimately a very charming one at that. The charisma of AC⚡DC's 2nd frontman shines through in every page of this book. Hilarious for a bloke from Jordieland. 📚5/5🌟 #BookReview

Loved it but I’m biased as I’m a massive AC/DC fan. It covers his early life,getting the call from AC/DC and making Back in Black and then the end of his career all of which were really interesting. Alas there wasn’t enough about the band itself over the years so hopefully that’s coming in his next autobiography

I love AC/DC and was a pleasure to listen to this. All we need is a tour haha.

I laughed. I cried. I was proud of him.
What a book. Well done, Geordie boy.

Not a fan of autobiographies, I always find the build up or background so annoying!
Not here though, loved every minute of it. Would have liked more detail on the last 40 years but Brian is so respectful of everyone, I concurred with his view on it being someone else’s job.
But if they do write such a thing, Brian should perform it.
A master of story telling

What a great life story and read only as Brian can. Left me wanting more and slightly sad to see if finish. Brian has such a good voice for storytelling.