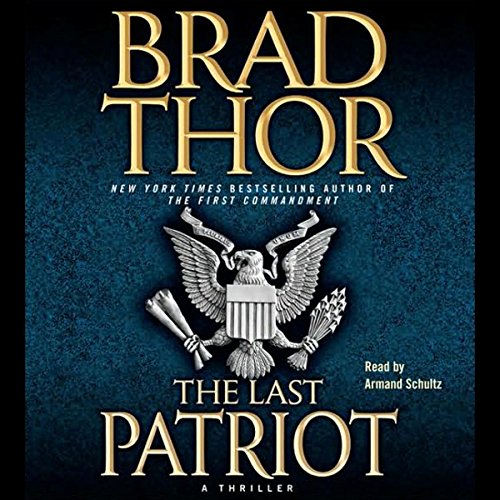 By: Brad Thor
Narrated by: Armand Schultz
Try for £0.00

In Brad Thor's highest-voltage thriller to date, Scot Harvath must race to locate an ancient secret that has the power to stop militant Islam dead in its tracks.

June, A.D. 632: Deep within the Uranah Valley of Mount Arafat in Mecca, the Prophet Mohammed shares with his closest companions a final and startling revelation. Within days, he is assassinated.

September 1789: U.S. minister to France Thomas Jefferson, charged with forging a truce with the violent Muslim pirates of the Barbary Coast, makes a shocking discovery - one that could forever impact the world's relationship with Islam.

Present day: When a car bomb explodes outside a Parisian café, Navy Seal turned covert Homeland Security Operative Scot Harvath is thrust back into the life he has tried so desperately to leave behind.

Saving the intended victim of the attack, Harvath becomes party to an amazing and perilous race to uncover a secret so powerful that militant Islam could be defeated once and for all without firing another shot, dropping another bomb, or launching another covert action. But there are powerful men who are determined that Mohammed's mysterious final revelation continue to remain hidden forever.

Hailed by the Chicago Tribune as "quite possibly the next coming of Robert Ludlum", Brad Thor takes listeners across the globe on a heart-pounding chase in which the stakes are higher than ever before.

What listeners say about The Last Patriot

This is a great book. I will read all Brad Thor books. I just wish it were Unabridged.

As long as authors wish to inject their politics into their books (Clinton-Gore T-Shirt) they can loose readers who are opposed to their flavor of politics.
This will be my last Brad Thor Novel. It wasn't very good anyway.

A worthwhile and enjoyable marriage of fact and fiction. It's so much fun you won't even know it's good for you.

Relevant to the world we live in today.

Relevant to the world we live in today and taking from today's headlines this is a must read. If one ignores the different viewpoints, and possibilities of outcome, they deserve what they are left with. Well worth the time.

Wow, what a great thriller!

This was a great action packed thriller that didn't slow down for a moment. I had to stay up late and listen to the end once I got half way through the book.

It is especially intriguing given today's political climate in the mid-east.

I am now going to start at the beginning of Thor's novels and work my way back to The Last Patrot.

very good and not distracting Really wish the next title of the book in the series was given. Since I am not readily adept at the skills of navigation it consumes too much time to find book 9. also tagging it as finished is difficult and, and, and....

Not as good as the previous 2 books in the series, i.e., not as exciting... and many times too unrealistic.

One of his best!

I'm so happy to have discovered Brad Thor. I am trying to read all the books now in sequence to keep up with the travels and travails of Scott Harvath.

I'veI read about eight or nine of the Harvath series so far, and, to my reading, this is one of the best ( and I like them all!). Besides the normal action, alliances, and intrigue, I really like how Brad Thor integrated technical details about weapons and locales with historical information.

Armand Schultz's narration is spot on, as usual. The Last Patriot is a great listen.

Where does The Last Patriot rank among all the audiobooks you’ve listened to so far?

It is among the top entertaining ones.

Yes, there were several twists that were entertaining.

The author's comments at the end on where he gleaned the ideas were especially interesting. The reader was great. His voice was at a pitch that made listening in the car easy for both my husband and myself. Our 500 mile trip passed quickly. =)

First half took too long to develop.
Second half was good.