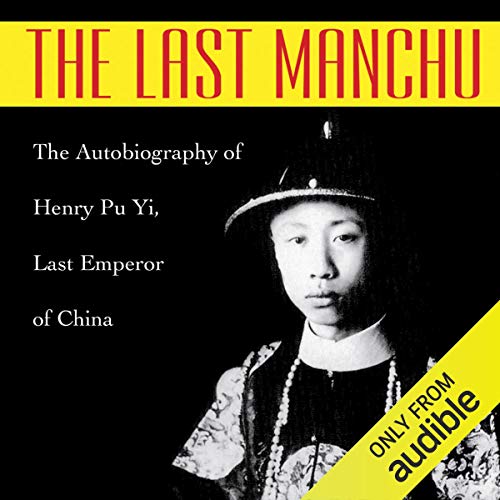 This autobiography of Henry Pu Yi, the last Qing emperor, tells the real-life story of a king in pauper's clothing. A head of state by the time he learned to walk, Pu Yi's shifting fortunes found him deposed, reinstated, jailed for war crimes, and ultimately redeemed, oddly enough, in the eyes of the communist government, while he lived and worked as a commoner. With a voice reminiscent of the great Alec Guinness, Gildart Jackson delivers audiences a tremulous performance, capturing the conflicted nature of the beleaguered emperor. The English actor exudes a regal sophistication, alternately punctured by arrogance and regret as Pu Yi grapples with unlikely turns of fate.

In 1908, at the age of two, Henry Pu Yi ascended to become the last emperor of the centuries-old Manchu dynasty. After revolutionaries forced Pu Yi to abdicate in 1911, the young emperor lived for 13 years in Peking’s Forbidden City, but with none of the power his birth afforded him. The remainder of Pu Yi’s life was lived out in a topsy-turvy fashion: fleeing from a Chinese warlord, becoming head of a Japanese puppet state, being confined to a Russian prison in Siberia, and enduring taxing labor. The Last Manchu is a unique, enthralling record of China’s most turbulent, dramatic years.

What listeners say about The Last Manchu

This was such a good and interesting audiobook...excellently written and, apart from some pronunciation issues, was very well read...it had me hooked form the beginning.
Having spent some time in North Eastern China many places were familiar to me which made the experience all the more complete. Would highly recommend.

Story told by its protagonist in a personal, non objective and powerful way. A great discover in world history.

Sorry to be harsh

Didnt get far with this book. I expect, that in keeping with its reputation its a fascinating and beautiful book. The reader has a pleasant and expressive voice, but hesitates in his phrasing sometimes so words come out a bit like computer generated speech. Unfortunately, I quickly found I was just listening to his pronunciation instead of the book proper.

This man can not pronounce Chinese names. It was an irritant from the beginning that he did not pronounce Cixi's name as 'Tzerchi' he kept calling her 'Sooshe'. It was the same with other Chinese names. This is most disrespectful and very annoying. He also read in a somewhat robotic manner, some expression would have been appreciated.

We can't choose our fate

This was fascinating. Tragic story. This man made many mistakes and at times I really found it hard to sympathise with him BUT he was a victim too. The time he was born into was toxic. The previous generations committed horrendous crimes against their own just to hold into power. He had been taught that he had to continue in that way to hold into his life.

The narrator is very clear and the writer has given plenty of insight and information regarding that period without overloading the listener.

I absolutely recommend this book for its historical and storytelling.

life of the last emperor of china is truly interesting. One is still left wondering what did he really think and feel about his later life. Paul Kramer gives interesting contextual information to further understand the situation Pu Yi lived in.

occasionally listener is left feeling like there is more to this story than is said. this book would be better with even more context and more detail.

Autobiography of the last Chinese emperor

Loved the tone and benevolence of this story, despite the expected distorted behaviour and experiences. Pu Yi seemed very honest about his own contribution to these dark times. I was riveted and listened almost continuously. However there is a suggestion that it isn’t as honest as it seems. Great for those who are Interested in Chinese history or who just love a fascinating tale.

From the horse's mouth as it were. The book doesn't linger too long and keeps moving. Henry Pu Yi is quick to acknowledge his faults during his account, and is often refreshingly frank. Though I cannot say if it is accurate or not, it is entertaining. As for the mispronounciation of some names, that may be the case, but it doesn't ruin the whole enterprise unless you let it.

I enjoyed listening to this. The narration is good and pleasant to hear. It's an interesting biography, particularly his experiences of being outside the people's revolution, so I would recommend.

A Marvelous and Ultimately Sad Memoir

This relatively short but detailed memoir covers the epic events of the last hundred years, told by Henry Pu Yi, the last appointed emperor of the Q'ing Dynasty. Pu Yi clearly underwent enough psychological trauma for several lifetimes - complete lack of childhood boundaries; virtual imprisonment after the birth of the Republic of China; collaboration and betrayal with the Japanese in Manchukuo; incarceration by the Soviet Union; ideological re-education by Communist authorities. I found his perspective to be startling. How can a person be simultaneously so pitiable and yet insufferable? Both helpless and haughty? Fascinating. Much of the emotional impact of the memoir comes from the fact that we readers know that he was being taken advantage of by many sides - yet Pu Yi seems tragically oblivious. I surmise that this memoir emerges from the massive "confessions" generated in the re-education camp - it definitely has mea culpa overtones.

It is a useful companion to the Bertolucci film, incidentally, which seems to follow this memoir fairly closely (with a few extra characters here and there for drama). The narrator does a remarkable job of interpreting Pu Yi's persona (cool, and with little affect) and does pretty well on the Chinese pronunciations. Bravo!

A case of bad narration ruining a great story

The story is truly fascinating. Like most Westerners, prior to this book, I only knew about the life story of China's last emperor from Bertolucci's 1987 movie. After I started listening to this, I also looked him up on the (sign, where else) good old wikipedia. This autobiography glossed over, albeit understandably, A WHOLE LOT of things, including the total omission of such unimportant fact as the murder of the newborn child of the empress). And of course, one can't help noticing all that propaganda. Despite all the above-mentioned issues, it is fascinating to hear such fascinating life story from his own perspective...But seriously, couldn’t the narrator at least make a tiny little more effort in pronouncing any the Chinese names correctly?

If you're a fan of history--and Chinese history particularly--then this book is for you. Well done and excellently performed, I enjoyed it immensely.

A man bound to the end

This man's life was that of a desperate struggle to be free, yet always being bound. Either bound by the corrupted traditions of the Qing Dynasty as a child, emperor in name only. Or bound by the ambitions of Imperial Japan, a pawn of great power geopolitics. Or bound by the pernicious nature of Communism, again a pawn for domestic propaganda. Only in death was he free. His is a story to be told of why man should and will always seek freedom.

If you're not very interested in the history, the economics, a lot of the finer details, this may drag a bit for you. it can come off a little dry. But I thoroughly enjoyed it, because I have an obsession with this particular historical figure.
the performance was also exquisite, it was nice to have a narrator who actually understands how to say foreign words.

A wonderful book that has a great amount of valuable information to draw from. Highly recommended!

Wow! What a great book!

As an avid fan of Chinese history, Pu yi's journey was incredible! I admire how he was able to get through what he did and was finally able to get what he wanted: to be a free man in so many ways.