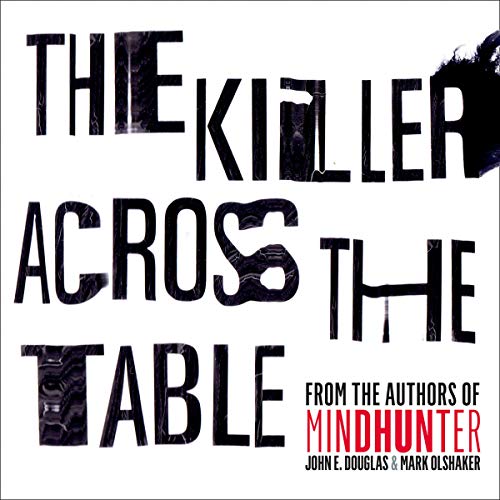 The Killer Across the Table

In The Killer Across the Table, legendary FBI criminal profiler and number one best-selling author John Douglas delves deep into the lives and crimes of four of the most disturbing and complex predatory killers he’s encountered, offering never-before-revealed details about his profiling process and divulging the strategies used to crack some of his most challenging cases.

Former Special Agent John Douglas has sat across the table from many of the world’s most notorious killers - including Charles Manson, Jeffrey Dahmer, ‘Coed Killer’ Edmund Kemper, ‘Son of Sam Killer’ David Berkowitz and ‘BTK Strangler’ Dennis Rader - and has also been instrumental in the exoneration of Amanda Knox and the West Memphis Three. He has gone on to become a legend in the world of criminal investigative analysis, and his work has inspired TV shows and films such as Mindhunter, Criminal Minds and The Silence of the Lambs.

In this riveting work of true crime, Douglas spotlights four very different criminals he’s confronted over the course of his career and explains how they helped him to put together the puzzle of how psychopaths and predators think. Taking us inside the interrogation room and demonstrating the unique techniques he uses to understand the workings of the most terrifying and incomprehensible minds, The Killer Across the Table is an enthralling journey into the darkest reaches of criminal profiling and behavioural science from a man who knows serial killers better than anyone else. As Douglas says:

‘If you want to understand the artist, look at his art.’

If you want to understand what makes a murderer, start here.

"John Douglas is the FBI's pioneer and master of investigative profiling, and one of the most exciting figures in law enforcement I've had the privilege of knowing." (Patricia Cornwell)

"John Douglas knows more about serial killers than anybody in the world." (Jonathan Demme, Director of The Silence of the Lambs)

"Douglas was instrumental in expanding our understanding of murderous psychopathy. He even coined the term “serial killer'." (Telegraph)

What listeners say about The Killer Across the Table

Excellent but should come with a warning

I struggled with the first 2 chapters as it graphically described the murder of a 7 year old girl. Just wanted to mention this for anyone who might be sensitive to this, it’s uncomfortable listening to say the least.
Apart from the very hard hitting first couple of chapters it’s enjoyable.
The narrator is fairly matter of fact, no sensationalism.
If you enjoyed mindhunter you’ll certainly enjoy this.

You will not be able to turn this off

Make sure you have plenty of time on your hands if you decide to purchase this audiobook. It’s unstoppable! After watching the excellent series on Netflix Mindhunter, this book delves deeper into the whys of some of the most warped minds of our time. It’s gripping, fascinating, well narrated and I hope there’s another volume soon.

Killers Across the Table: Needlessly long subtile is my first true crime book, having enjoyed a few podcasts in the same genre (West Cork being a standout). I still only bought this because it was written by the FBI-Mindhunter guy, John Douglas.

Mindhunter being a TV series about two FBI profilers who interview killers to find out what makes them tick, presumably to stop more murders happening, it's unclear. The book focuses on the profiles of four different, real life killers, each interviewed by Douglas, who gives us his insights into their different methods, motives and reasoning.

It's fascinating up to a point. Douglas's observations and descriptions of the crimes can make for a gripping, grisly listen, but I also noticed that he often seems to base his conclusions on very slight things, like the person's body language, or on a single comment. I'm not saying he's not great at his job (he's probably very good at it and more importantly, trained), or that these men aren't abhorrent, but a lot is riding on psychoanalysis, which isn't an exact science. We also get some musings on evil and justice that I wish the author got into more deeply.

One of the killers profiled seems to show some remorse and even sympathy, which is almost returned by Douglas, just a little, as he states that law enforcement and the state failed the killer in the past. Unfortunately, this nature versus nurture question doesn't go much beyond "a rough upbringing doesn't excuse murder unless you're crazy". I suppose it doesn't, and Douglas seems mostly happy with the "justice" dished out to murderers in America, especially to the "evil" ones. The thing is though, there are crimes of passion, manslaughter and most importantly, false murder convictions. Douglas even mentions how he worked with the defence on the west Memphis three case. I finally thought we might get some of his thoughts on how broken and wrong the justice system can be. Damien Echols was on death row, lest we forget, but after mentioning the case, Douglas just drops it and returns to his current profile.

It would be interesting to know if moments like that shook his convictions in regards to fellow law enforcement, or to the idea of a death penalty, but he seems broadly in favour of severe punishment for the people he claims are evil. This opinion seems to be cemented later on when Douglas tells us how he showed horrific murder tapes to an actor, making that actor pro state execution. All the reasons against (wrongful convictions, morality, setting an example, it's not a proven deterrent and WRONGFUL CONVICTION) aren't offered as a counterpoint so the book feels somewhat manipulative. It's hard not to agree though, as the killer's numerous crimes are sickening and their seeming indifference to these brutal acts could easily drive a person into a righteous fury, demanding swift and brutal justice....

But I like to think we're better than that.

I did like the section where Douglas mentions the media getting upset with him for not confronting these killers. With him calmly explaining how moral indignation won't get you anywhere with most criminals, let alone murderers. He also added that, unlike in Hollywood, beating up a man in chains, murderer or no, will wind you up in jail.

I listened to the audiobook version with narration by the actor from Mindhunter. He's a better screen actor than voice, occasionally coming across as bored sounding. He's also a little monotone but that actually helps with the grisly subject matter. I do wish he'd attempted some different voices for the few times a killer is quoted although he perhaps thought this would detract from the seriousness of the subject matter. Either way it's a perfectly good listen and I'd probably lean towards this as my preferred medium for the book.

For anyone that enjoyed the first series of Mindhunter, I'd thoroughly recommend this. It's true crime from the perspective of someone who's lived it, faced it, looked it straight in the eye and shook its hand.

loved it. incredible story and great narration. highly recommend to those who like investigative books and criminal stories

Very interesting but scary and disturbing.

Interesting insight into the mind of these psychopaths, but ultimately I found it as scary and disturbing as it was interesting and I'm going to need an upbeat book after this.

I binged this book, it was brilliant. I liked how effortlessly it segued from one killer into the next and still tied the crimes together in terms of patterns and signatures.
Groffhas a great voice and I didn't tire of it - however, at times, it was too empathetic. He is an actor, so I can forgive that.
Overall a great read.

A bit too much

This is an interesting book. There's a lot here that is really worth knowing. And, I liked the interview with the author at the end of the book. But, I found the voice artist a little too mellow, too sleep-inducing. No attempt to try different voices, or tones.

Also, I do listen to a lot of true crime audiobooks. So, I'm not squeamish. But, honestly the descriptions of the different crimes often went too far. You don't have to detail the entire horrific rape, brutal beating and merciless murder of a seven year old girl to get the point across. There were parts that really should have been left out. I was left wondering what exactly WAS the author's intention? To sensationalise those chapters? Either way. I wouldn't want to listen to this again.

A deep dive into dark places

Brilliantly narrated by Jonathan Geoff, this book explores in detail four disturbing murderers. Fans of Mindhunter and true crime will enjoy the analysis of each case, though the gruesome retellings are not for the faint hearted.

Another brilliant book from Douglas and olshaker. just as good as mindhunter. brilliant that Jonathan Geoff narrates the book to.