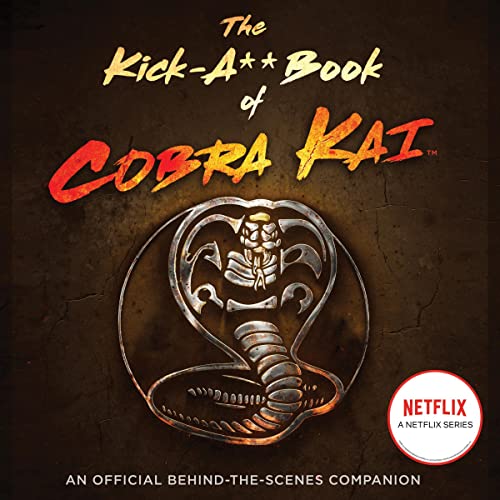 The Kick-A** Book of Cobra Kai

Calling all badasses—tie on your headbands and tighten your cores! The only official guide to the kickin’ world of the Emmy-nominated and globally beloved show Cobra Kai is here.

The Kick-A** Book of Cobra Kai is a celebration of the superfans—an essential companion to the show acting as a master sensei ready to guide listeners through the karate-crazed San Fernando Valley. The legacy of The Karate Kid and Cobra Kai continues with interviews with Ralph Macchio (Daniel LaRusso), William Zabka (Johnny Lawrence), Martin Kove (John Kreese), Xolo Maridueña (Miguel Diaz), Mary Mouser (Samantha LaRusso), and MUCH MORE!

The show’s creators will give an unprecedented look inside the making of Cobra Ka: the writing, directing, and production of this beloved franchise that has grown from scrappy underdog to a global phenomenon. You will hear directly from the show’s crew, including our stunt team who will give you an exclusive behind the scenes look into fight choreography, journey through the Valley from the magical retreat of the Miyagi-do dojo to the humble strip mall that houses the Cobra Kai dojo with our set designers, and hear from our composers how the badass soundtrack for the show was conceived. And much more!

What listeners say about The Kick-A** Book of Cobra Kai

Great book, but it would have been amazing if they had the original actors voicing their lines.