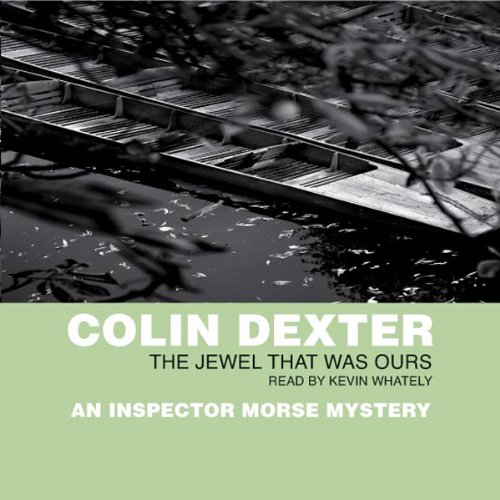 The Jewel That Was Ours

By: Colin Dexter
Narrated by: Kevin Whately
Try for £0.00

For Oxford, the arrival of 27 American tourists is nothing out of the ordinary...until one of their number is found dead in Room 310 at the Randolph Hotel. It looks like a sudden and tragic accident. Only Chief Inspector Morse appears not to overlook the simultaneous theft of a jewel-encrusted antique from the victim's handbag. Then, two days later, a naked and battered corpse is dragged from the River Cherwell. A coincidence? Maybe. But this time Morse is determined to prove the link.
© Colin Dexter; (P) Macmillan Publishers Ltd
Literary Fiction Police Procedurals Traditional Detectives Suspense
Show More Show Less

What listeners say about The Jewel That Was Ours

It’s really neat, listening to an Inspecyor Morse novel being performed by his Lewis (from the tv shows) :-)

Added to the enjoyment of that is Lewis’s (ok, Kevin Whatley’s ;-) ) pretty darn decent attempts at American accents, an attempt which succeeds more and more, as his performance travels further and further into/through the book :-) (I have listened to quite a few audiobook and tv show performers’ attempts at American accents, and most fall FAR short of their marks. Kevin Whatley’s is DEFINITELY the best I’ve so far heard :-)

My only criticism of this book is that the end of it seems to have been pushed through to print too quickly. In Morse’s final soliloquy, he makes some QUITE ELEMENTARY, grammar mistakes. Yup; Morse, who is a HUGE stickler re grammar. Ah well; the book is sufficiently enjoyable, as to cause one to almost completely ignore those mistakes.