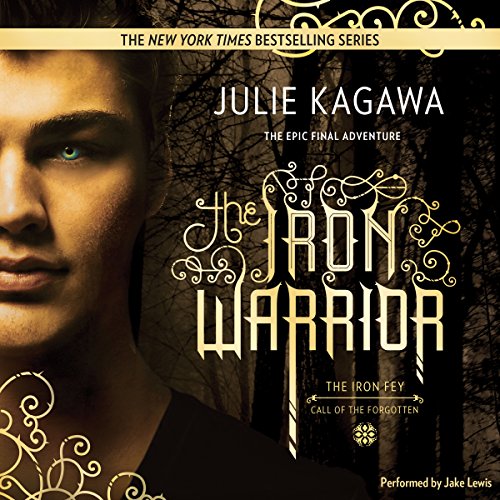 By: Julie Kagawa
Narrated by: Jake Lewis
Try for £0.00

The Iron Prince - my nephew - betrayed us all.

Waking after a month on the brink of death, Ethan Chase is stunned to learn that the Veil that conceals the fey from human sight was temporarily torn away. Although humankind’s glimpse of the world of Faery lasted just a brief moment, the human world was cast into chaos, and the emotion and glamour produced by fear and wonder has renewed the tremendous power of the Forgotten Queen. Now she is at the forefront of an uprising against the courts of Faery - a reckoning that will have cataclysmic effects on the Nevernever.

Leading the Lady’s Forgotten Army is Keirran himself: Ethan’s nephew, and the traitor son of the Iron Queen, Meghan Chase. To stop Keirran, Ethan must disobey his sister once again as he and his girlfriend, Kenzie, search for answers long forgotten. In the face of unprecedented evil and unfathomable power, Ethan’s enemies must become his allies, and the fey and human worlds will be changed forevermore.

“The Iron King has the...enchantment, imagination and adventure of...Alice in Wonderland, Narnia and The Lord of the Rings, but with lots more romance.” (Justine Magazine)

“Fans of the first Iron Fey series will be interested in seeing Meghan and her family again, while new readers will find enough detail to help them jump right in and enjoy the magic, adventure, and touch of romance.” (School Library Journal on The Lost Prince)

What listeners say about The Iron Warrior

Loved the whole wild imagination of these stories, I couldn't put the book down. Hopefully they will be a film one day.

it has now come to full circle

there were no mysteries left unsolved and no lose ends left untied. the ending was very satisfactory. I just wished the epilogue has a few more lines after, but other than that I have no other complaints - ok except for a few instances in which the narrator didn't have the appropriate emotion at certain sections of the book (thankfully it's very minimal).

I love this series and highly recommend it.

Losing the Summer fairy had me sobbing.

My only complaint is that I really wanted much much much....maybe mostly for this to be Kierran's story. I can only hope that is coming next.

Oh and I feel Razor should have stayed with Kierran in the end. While I liked that he went off to adventure with Kenzie, in my heart he belongs to Kierran.

I love this series. the story and the way its narrated are smooth and it pulls you in. the ending felt a little rushed but still good!

This is the end of Ethan's story. I think my favorite part is when Ethan becomes invincible do fairy magic. I am still shocked with kieran's betrayal. It is never a good idea to play with black magic.

My other favorite part, is the end. it was very heartfelt and I became emotional. It was a very good conclusion to this series. However, I still want Puck to have his HEA.

You never die like you are supposed to , and I am a Cat are my favorite lines

I loved the entire Iron Fey series! I hope one day the books will continue on. Right now, I'm going to download The Iron King and listen to the entire series again!

On the up side the overall story was creative and had a good message. For those who want clean books, there was an occasional swear word and the romance is sweet and clean.
On the critical side--I could almost hear the author counting words and trying to meet a deadline. The series started out great, but by the end it was getting repetitive, and sappy. And the narrator made the dialogue with the villains even more melodramatic. I have said this before--these books needed another proofread before going to the press! For example: Keiren loves the summer faery. Then he decides he does not love her anymore and he wants to kill her. No, actually, he just changed his mind, and he loves her again. The author was obviously reaching for villainous things to do, but the flip flop love just does not seem plausible to me. I think he should have kidnapped her and held her hostage where he could make sure she was safe. That would be more consistent with obsessive love.
Also, if the light is pre-dawn. That means it will be day soon, not night for several more hours. And if the battle is taking place in the dark, a human will not be able to see shadowy assailants very well, nor can he see what is taking place elsewhere on the battle field.
These stories are worth the read/listen. I just find it disappointing when the discrepancies and plot holes are difficult to ignore.
I liked the other Iron Fey series better. This one just likely did not receive the same attention by the author as the other books.

So full! So complete!

I LOVED this final installation of the Iron Fey series. It rounded out so nicely. The action was amazing. The dialogue intriguing. Fans of Harry Potter, Dr. Who, The Mortal Instruments and A Court of Thorns and Roses may feel like home in the Iron Fey universe.

Loved the voice of the reader he gives it so much depth, for all caricatures

I felt quite fulfilled by the way Julie ended this series. I can close the door and move on.