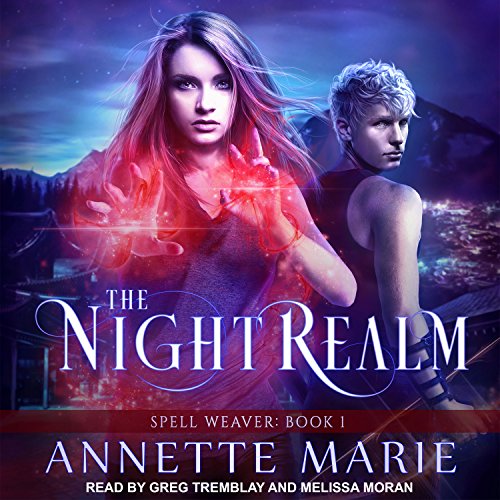 By: Annette Marie
Narrated by: Melissa Moran,Greg Tremblay
Try for £0.00

Clio has the rare ability to mimic magic. Sent on a mission to steal spells from the most dangerous family in the Underworld, she ends up stealing something else: their spell weaver.

As a nymph living in exile among humans, Clio has picked up all sorts of unique survival skills. But pilfering magic from the Underworld's deadliest spell weavers? Not so much.

Unfortunately, that's exactly what she has to do to earn a ticket back home.

Conning her way into the Underworld may have gone pretty well, but now she's got a new problem. His name is Lyre, and he's a sinfully alluring incubus, a skilled spell weaver, and the only thing standing between her and stealing some damn magic.

What listeners say about The Night Realm

This book is quite the adventure, journeying into the Underworld. That's where Cleo's real trouble begins, sometimes a pretty face leads to utter disaster. For poor Lyre this is definitely the case, since meeting Cleo his life gets turned upside down and he's not even sure why he wants to protect her. She needs to infiltrate and steal something dangerous and rare, but with betrayal on the horizon everything goes wrong. With a strong storyline and loveable characters, this is a very enjoyable book. The interesting lore, the very beautifully described world it's an unforgettable story. I am looking forward to jumping into book 2 next to follow both Lyre and Cleo's journey.

Loved this book. Narrators did a fabulous job. I will definitely be listening to the next in the series.

FIVE STARS FOR ANOTHER CAPTIVATING BOOK!!!

As an avid reader I've read hundreds of good books. All of Annette Marie's books are levels above just good books. I recommend them to everyone who wants to lose themselves in a different world. Her descriptions are vivid, the magic is enthralling, the characters have heart and are easy to connect with, and there's never a shortage of evil that needs to be stopped. This book is more than worth your credit and time!

It’s was kind of like a innocent version of every demon story you know. Not that it’s a bad story, just a little too YA on a more mature topic. The lead female is so young and naive. Then the male incubus lead is also pretty innocent. But the author does start off the story saying they arnt demons but damons. So you have to accept that this is just an all together new story and don’t compare it to anything else.

Nothing waorse than an airhead heroine, too stupid to live as a character. I personally dislike having to read about a lead female character that could double as a female "Frank Spencer"! At every turn, you just want to shout out 'you stupid bint!'.... Been a while since I last disliked a character so much!

Expected some interesting characters and world building; I instead got a goofy teen romance novel.

I couldn't stop listening! The characters are complex and interesting. The plotline hooks so well.

I gobbled up Annette Marie's Steel and Stone series, which starts off with the book Chase the Dark. I recommend this series if you haven't already read it! I read the Steel and Stone series first before reading The Spell Weaver's series and enjoyed the spin off, loving the Lyre character and wanting to know more about him. I read each and every book of the Steel and Stone series, but have to admit I skipped the 2nd book in this series, The Shadow Weave. After reading this book, The Night Realm, I went directly on to "The Blood Curse" and did not feel I missed anything. My reasoning for doing this is because I did not want to go through the same exact type of angst as in the Blood and Stone series (Piper and Ash) over whether Clio really loved Lyre or not. Come on, you know she knows she does. Didn't feel like going through a whole book while she decided what we all already know. lol Wish Annette would give us more books with these characters, she did a great job of making us care about them and want to know what happens next to them.

Ditsy Lead but Great Puck Me Up Book

By Annette Marie
Narrated by Melissa Moran and Greg Templay

So I immediately started Book Two of this series before writing a review for this one. That's a good indicator that I enjoyed this first installment 😊, which I did.

The Night Realm most definitely falls in the YA, Young Adult, category and it follows most of the common formats for the genre. A virgin girl from the Overworld falls for a misunderstood bad boy from the Underworld. Oh course the bad boy is secretly not really bad but only pretends to be for his family. I only mention the virgin angle because its brought up multiple times in the story. I dont know why its relevant or why authors feel the need to over use the virgin angle.

Even with me being so picky, I found the premise of the novel interesting. The Male lead, Lyre, is a spellweaver. He conceives and creates original magically spells that others can utilize with gemstones. His family specializes in war spells so most of the things created are violent and/or deadly. Lyre isn't bout that life 😄 He wants to do and be something ddifferent.

The author has created 3 main worlds with one being a sorta apocalyptic earth with limited humans. The world building and descriptions of its inhabitants is done well. The plot and world building is complicated enough to keep the adults interested, but not so complicated that it feels like work to understand it.

The lead female, Clio, is a bit ditsy and fumbles through most of the book making irrational decisions. Why do YA books make their females so silly so much of the time? One positive thing about Clio is that she is brave and stands up for what she believes to be right. Multiple times she puts herself at risk to save another.

Though the main character is Clio, the best characters all come from the underworld. Lyre's family is made up of a psychopath, a dominator, a genius bookworm who makes destructive spells, and a evil father who oversees it all. In addition, Ash who is one of their slaves is a daemon who actually has a baby dragon for a familiar. Ash is my favorite character even though he has limited page time.

I found this to be a charming YA read that was on the edge of being a great New Adult novel.

After reading a very depressing book prior to this one, I am glad I read this one next. It probably is getting an extra star simply because I felt better after reading it.

Actually loved the two narrators, usually it's annoying but this one worked out.

4 Stars 🌟🌟🌟🌟. Great book. I've become friends with the characters. This is for my top Tier books. The story is deep with many layers. I probably finished it in a day. I'll likely reread this one when I miss the characters or need a pick me up.

But the whiney and helpless attitude of the main character gets really irritating really quick.

Definitely not a Mary Sue.

Spoiler, the main character is weak. She doesn’t know combat, freezes in the face of violence, isn’t hyper-intelligent, and frankly is skittish as a feral cat. Honestly, that makes her seem more real and concrete, in what is basically the first book of a world building fantasy. I applaud the author for this, because given the main character’s power, if she wasn’t nerfed, would be OP Mary Sue. There were a number of situations where if she had broken with her established character arc, she could have killed some people that would have made the listeners happy, but instead, she runs away as soon as the opportunity presents itself. The MC is well written as what she is, as a magically powerful being, with weak physical skills, somewhat cowardly, but with enough will power to push through to the end.

Please learn how to pronounce contractions.

Fun story!! I probably should have read it instead of listened to this annoying narrator. Tremblay does a great job with the male character but Moran pronounces contractions ending in "d" like a little kid. She adds an extra "d" sound every time. Didn't is pronounced "did dint", couldn't is "could dint". Very juvenile and makes the female main character sound like an idiot. Also, "T" is often pronounced as a "d". Gahhh!!