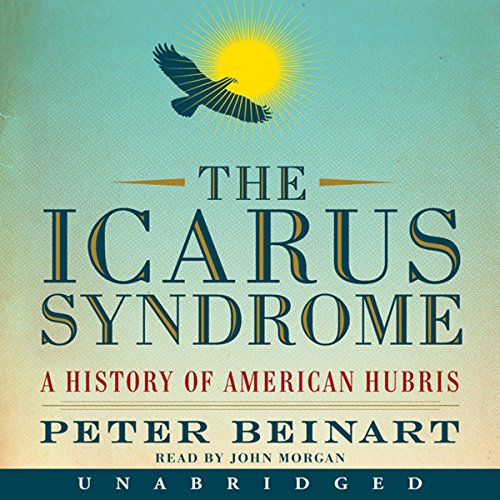 By: Peter Beinart
Narrated by: John Morgan
Try for £0.00

"Peter Beinart has written a vivid, empathetic, and convincing history of the men and ideas that have shaped the ambitions of American foreign policy during the last century - a story in which human fallibility and idealism flow together. The story continues, of course, and so his book is not only timely; it is indispensable.” (Steve Coll, author of Ghost Wars)

Peter Beinart's provocative account of hubris in the American century describes Washington on the eve of three wars: World War I, Vietnam, and Iraq - three moments when American leaders decided they could remake the world in their image. Each time, leading intellectuals declared that the spread of democracy was inevitable.

Each time, a president held the nation in the palm of his hand. And each time, a war conceived in arrogance brought tragedy. But each catastrophe also imparted wisdom to a new generation of thinkers. These leaders learned to reconcile the American belief that anything is possible with the realities of a world that will never fully conform to this country's will - and in their struggles lie the seeds of American renewal today.

What listeners say about The Icarus Syndrome

gave me a lot of insight. explaining a lot of modern history. how does it develop?

Really good narration & interesting details that support a very timely thesis. It's like David Halberstam's The Best and the Brightest but covering more history.

What made the experience of listening to The Icarus Syndrome the most enjoyable?

I appreciated the depth of the author's research and his interpretation of the motives of the various actors. Beinart reviews America's foreign policy, concentrating on events after World War I.

Beinart is not one of the flag-waving historians who view America's history through the veil of feigned patriotism. Rather he is a pragmatist who believes America acts in its own best interest. However, many times America makes the wrong decision. The author uncovers some interesting connections and ironies along the way as he tries to get into the head of the protagonists and describe their thought processes in formulating the actions of America in the War on Terrorism.

Have you listened to any of John Morgan’s other performances before? How does this one compare?

No, the amount of material is too much to absorb in one sitting. This book is best listened to over a period of time to give the reader a chance to ponder these great issues.

This is an excellent thesis on the hubris of America in its dealings with its enemies. The Bush administration, particularly Cheney comes in for criticism. The machinations of the Bush clique is described in great detail.

This was a great history lesson and interesting perspective on the lead-up to America going to war and how the leaders of the time made decisions. I thought the piece was well-researched and presented in a very interesting format. I'd say it's one of the better non-fiction books I've read recently and very engaging.

This was a great read! It is very revealing and insightful on the key characters that formed American foreign relations. It was also very interesting to get a view on the mindset and circumstances that affected key thinkers and policy makers in the US. I would highly recommend this book.

I know this book is just one perspective on US foreign policy, but it certainly does explain some of our more significant foreign policy boondoggles.