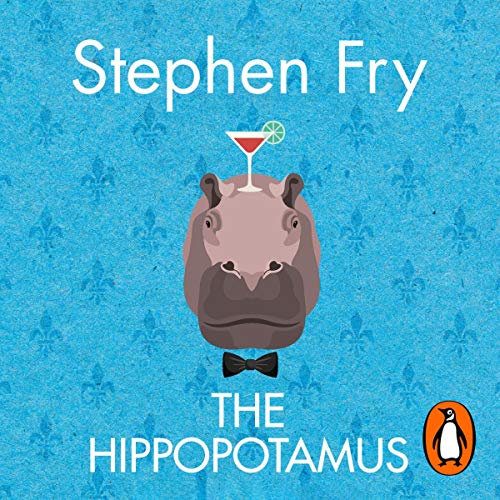 Ted Wallace is an old, sour, womanising, cantankerous, whisky-sodden beast of a failed poet and drama critic, but he has his faults too. Fired from his newspaper, months behind on his alimony payments, and disgusted with a world that undervalues him, Ted seeks a few months repose and free drink at Swafford Hall, the country mansion of his old friend Lord Logan.

But strange things have been going on at Swafford. Miracles. Healings. Phenomena beyond the comprehension of a mud-caked hippopotamus like Ted....

What listeners say about The Hippopotamus

A great story, funny from start to finish. I loved the reveal at the end. A great bunch of strange, pompous and eccentric characters without too much of Fry's own history (hopefully at least!) interwoven like some of his others. Very, very enjoyable and, of course, expertly read by the man himself.

Stephen Fry at his best

What made the experience of listening to The Hippopotamus the most enjoyable?

This was beautifully written and narrated. A great story, couldn't stop listening, the aural equivalent of a page turner. Excellent characters, a great plot.

What was one of the most memorable moments of The Hippopotamus?

The twist, which I never suspected for a moment.

What does Stephen Fry bring to the story that you wouldn’t experience if you had only read the book?

His wonderful speaking voice reading his own words. What could be better.

Stephen Fry has worked a miracle with this great story.

Would you listen to The Hippopotamus again? Why?

Stephen Fry can do nothing wrong in my mind. This book is just another facet of his brilliance. A very clever, very sexy, very funny, totally compelling book. I will definitely listen to it again, probably more than once.

The unexpected twists. The characterisations.

Stephen Fry has the most incredible speaking voice and makes the characters live because he is also a brilliant actor.

shame about the obscenity

Could have been so good . . was so promising . . but just too obscene.

I have read the lier and although it was rude at bits I was fine with that but this book has beastiality and statutory rape I found disturbing and distasteful. Also didn’t think Stephen read it as well as his autobiography’s and the lier.

Really enjoyed it though has some very strange adult themes. Not for the faint hearted.

I'm not sure whether I can really profess to have enjoyed this story. There were some interesting passages, some more difficult to endure than others. I knew nothing of the story before embarking upon this book and having had more than one WTF moment, I'm not sure I would have bothered if I had. The trouble is on one hand it is well written and quite funny but on the other it is also deeply unsettling. Suffice to say if casual misogyny, homophobia, bullying, rape and bestiality are your thing you might fare better than I.

As always, Stephen delivers a flawless performance. The story was interesting. ..bit odd. ..but it wouldn't be Fry without some gratuitous swearing and explicit sexual references.

This book is terrible. I had high hopes but it has no redeeming features whatsoever.

Got up it's own fundament a wee bit too much!

Witty as one would expect, with a nice finish, albeit somewhat 'So long and goodnight!'

Would you listen to The Hippopotamus again? Why?

Absolutely, because Stephen Fry brings the characters so fully to life.

What was one of the most memorable moments of The Hippopotamus?

The description of the events of the New Year's Day shooting party, from the point of view of two young boys.

Everything! Every character was distinct, even people who only had one line of dialogue.

If you could take any character from The Hippopotamus out to dinner, who would it be and why?

These characters are the sort of people one prefers to watch from a safe distance, actually.

This is the first audiobook novel I've experienced, and I can't help but think that, as first reads go, this one sets the bar extremely high. If you've never had Stephen Fry read you a story, doing all the voices, you've really missed out. I listened to the first few chapters while out walking one day, and was thus obliged to perfect the finger-point that perfectly expresses "I'm not laughing at you, but the sounds in my ears" to strangers surprised by the eruption of snorts, hoots, and giggles as they approach or pass.

Well though out story with some questionable Humor

A genuinely fun experience with glib posturing and pontificating humour. It dose have a questionable side to certain sexual encounters which either put you off or think twice about recommending it to another. But the story runs well and ties up witty twists and turns nicely. Narrated to perfection by the marvellous voice of Stephen Fry.

The sex and the casual mentions of pedophilia and bestiality were enough to put me off. I think the book could have done without it. I wish I hadn't listened to it. This from a person that loves listening to anything Stephen Fry writes or reads.

what a british gem mr fry is!

i can't possibly get enough of stephen fry. i'm gulping his books like morning tea.

The language and turn of frase are superb.

Fry delivers a character who's one liners are cuttingly funny and delivered like rounds from a tommy gun. loved it 💪

Sensitivity, profanity, bestiality - its all here!

What made the experience of listening to The Hippopotamus the most enjoyable?

I could listen to Stephen Fry narrate a set of Ikea instructions, so it is not a surprise that his delivery and pace are just perfect here. He is able to change his voice very very subtly to convey information about each character - a slight accent for the character Michael, for example, and a slight softening for Jane. His narration makes the quite unlikeable Ted, quite loveable by the end.

I loved the character development and the way the story moved along. It is quite slow and the beginning as we are told about Ted's mission. However this allows us to get to know Ted well. In the beginning his profanity and sexism are quite shocking and seem very dated. However by the middle of the book the swearing seems as much a part of him as breathing. The book downloaded into 2 parts and they felt like very different books. The first set the scene and the second contains all the action. The ending was a complete surprise to me. I also like the insights that Ted gives about art and poetry and his own disappointment in his fading creativity.

Have you listened to any of Stephen Fry’s other performances before? How does this one compare?

I listened to his biography.

If you could take any character from The Hippopotamus out to dinner, who would it be and why?

Michael. He is a true modern entrepreneur but his past and early life make him quite mysterious.

If you can get past the profanity and, of course, the sexual references, you are in for a treat. Ted turns out to be very sweet, sensitive and shrewd. The novel leaves the reader with lots to think about.

What other book might you compare The Hippopotamus to and why?

Dunno, but it definatly has a very Fry-esque stamp on it.