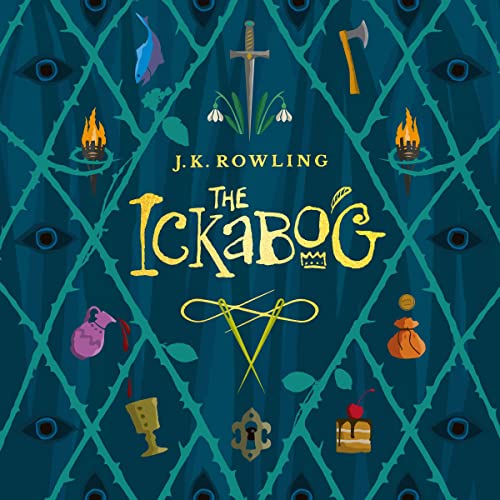 Stephen Fry is an English actor, screenwriter, author, playwright, journalist, poet, comedian, television presenter, film director and all-round national treasure. Whilst at university, Fry became involved with the Cambridge Footlights, where he met his long-time collaborator and friend Hugh Laurie. As half of the comic double act Fry and Laurie, he co-wrote and co-starred in A Bit of Fry & Laurie and Jeeves and Wooster. Fry’s acting roles include Blackadder, Kingdom, Bones, V for Vendetta, Sherlock Holmes: A Game of Shadows and The Hobbit trilogy. He has written and presented several documentary series and as a proudly out gay man, the award-winning Out There, documenting the lives of lesbian, bisexual gay and transgender people around the world is part of his thirty-year advocacy of the rights of the LGBT community.

The Ickabog is coming…

A mythical monster, a kingdom in peril, an adventure that will test two children’s bravery to the limit. Discover a brilliantly original fairy tale about the power of hope and friendship to triumph against all odds, from one of the world’s best storytellers.

The kingdom of Cornucopia was once the happiest in the world. It had plenty of gold, a king with the finest moustache you could possibly imagine, and butchers, bakers, and cheesemongers whose exquisite foods made a person dance with delight when they ate them.

Everything was perfect - except for the misty Marshlands to the north, which, according to legend, were home to the monstrous Ickabog. Anyone sensible knew that the Ickabog was just a myth to scare children into behaving. But the funny thing about myths is that sometimes they take on a life of their own.

Could a myth unseat a beloved king? Could a myth bring a once happy country to its knees? Could a myth thrust two children into an adventure they didn’t ask for and never expected?

If you’re feeling brave, immerse yourself in this audiobook to find out....

PLEASE NOTE: When you purchase this title, a PDF including full-color illustrations from the winning artists of The Ickabog Illustration Competitions run by Hachette Children’s and Scholastic will appear in your library along with the audio.

J.K. Rowling will be donating her net royalties to The Volant Charitable Trust, expected to be equivalent to a minimum of £2.00 for each copy of The Ickabog sold in the UK.

The Volant Charitable Trust is a registered charity in Scotland with charity number SC030790.

What listeners say about The Ickabog

Expertly narrated by Stephen Fry, this story is rich in description, oozing in imagination and thoroughly enjoyable. Featuring themes of good versus bad/misguided and at least one excellent example of how better understanding can improve the world. This would make a popular gift for children. I think it is great that the proceeds go to charity. I couldn't work out how to view the PDF that comes with, but look forward to seeing the illustrations once I've worked out how. Reading the Ickabog chapters that J.K. Rowling so thoughtfully released online during lockdown helped my children find some comfort during worrying times and the Ickabog will always to me evoke memories of snuggling up safely and sharing the story as a family. J.K. Rowling, Stephen Fry and Team have clearly worked very hard to produce this wonderful audiobook. My family will listen to this over and over again and will treasure it.

I really liked this story. I liked the King. I am 7. Thankyou. By Robin

The story lacks originality, imagination and charm, it feels like it is just a rehash of several other fairytales. Characters are completely unengaging and lifeless.
It seems very childish in its simplicity, which is at odds with the amount of mindless murder that goes on in the story. I can't quite fathom what age group it is aimed at.
This is no Harry Potter, and certainly no Hiccup Horrendous Haddock.

Another great book by JK

A lovely story, a classic fairytale with JK’s signature brand of morality.
It’s not Harry Potter... PLEASE don’t compare it to HP. It’s a great children’s story in its own right & I love message behind the tale, very relevant to the world today.

Well written, intriguing story with a deeper meaning when you truly listen. Definitely a good book for the younger generation as well as adults.

Dont steal away from this delight of a tale captivatingly told - warm, funny, and telling. Can’t wait til granddaughter is old enough ...

Such a lovely story!

I loved this!! I will read anything that’s narrated by Stephen Fry as he is makes everything such an easy listen, perfect before going to bed but the story was so cute! Although a little sad at times it has such a good ending, would 100% recommend!

Not the greatest. I struggled to keep going with it and had it not been written by J K. Rowling I'd have probably thrown in the towel.
Nice idea but failed to get to the point.
Stephen Fry is a great narrator

I thoroughly enjoyed it.

I loved the story, and Rowling can write beautifully. the story itself reminded me of a true reflection of corporate greed and lies. We can all relate to how people are treated when someone sees an opportunity to make money.

.... this is my takeaway from this tale, which I believe will be cherished and read for generations. If we can embrace what we learn, the world will be a better place to live in.

I loved Harry Potter and have revisited the books and movies many times over. And I adore Stephen Fry. But I didn't like this book.

It starts as a rather heavy-handed treatise on class differences in society, showcasing how people with power can talk themselves into ignoring their feelings and thus justify being unfair, or worse, for their own comfort. It may change course further on, but right now I just can't take any more of the issues I hear about in the news every day. So many of my favorite fiction authors have turned their novels into pulpits, addressing some societal issue they feel strongly about. I find I usually agree with their position, but really wish they would continue to create fictional worlds where we all can take a break from the bleakness and cruelty of the world as it exists right now.

The worst thing here is that the story is told rather than shown, and the humor, charm, and deep characterizations that I fell in love with in the world of Potter are definitely MIA. I expect I will be in the minority with this review, but another seven hours is more than I can manage. Did not finish and returned.

my kids who are big Harry Potter fans lost interest in under 7 chapters.

Ickabog starts out promising with JK’s charming writing. THEN the body count builds and builds with never ending details of a government official’s corruption and malfeasance. It just goes on and on and on and on and on! Around chapter 40ish things FINALLY start getting hopeful and the book ends quickly after that. Maybe if the narration focused much more on the lives of the characters I ACTUALLY cared about rather than the villain, I may have enjoyed it more. Maybe if the villain was interesting at all, I would have enjoyed it more.

Most of the book focused on the villain’s acts of villainy rather than the hero’s character development. The characters who are good in the beginning of the book are still good in the end with very little growth. The characters who started out bad were still bad in the end with no depth or intrigue. I didn’t have any investment in ANY of them because they were all shallow ghosts- barely a whisper of someone I could root for or someone I could relate to. It’s a classic example of “telling rather than showing” -SUPER DUPER disappointing.

First off, JKR seems to understand that adults want to listen to kids story lines. And I absolutely adore her for that, as well as philanthropically and as a brilliant creative mind.
Secondly, Stephen Fry did actually read some of the Harry Potter books but audible does not have his recordings. He is the number one reader for JK Rowling, imo. There is no one better. Pay him a million dollars.

I absolutely loved this audio. We listened to it as a family and it kept not only myself, but my children engrossed. The story teller voice is also very pleasing. 10/10 would buy again.

Well worth a listen.

I enjoyed the story. The characters were well done. And Stephen Fry gave a marvelous performance.
There is some violence, but no sex or language issues that I caught.

JK Rowling is a great story teller. But it seemed to be a political satire. The phrase “ I know how to destroy him. I’ll ruin his reputation” was very much the 2020 cancel culture. I’m sure the symbolism in this story will be analyzed by everyone.

I love JK Rowling. This would have been a beautiful short story. It was 40 chapters of despair, murder, children dying, and people accepting the status quo until the protagonists had any response. Cut out 20 chapters of descriptive evil and the ending would have felt balanced. Not a favorite and I will not let my kids listen to it.

To my surprise this delightfully witty fantasy was weaved with classic morals & lessons. Throughout the darkest chapters of this captivating tale, the reader is able to hope in truth and honor. It is a tale that should be told throughout the generations and read to children around the world. It belongs with other classic tales such as Peter Pan, Hansel & Gretel, and Little Red Riding Hood. Fun. Adventurous. Heroic.

Reminds me of Roald Dahl books. I’m looking forward to more short stories like this!