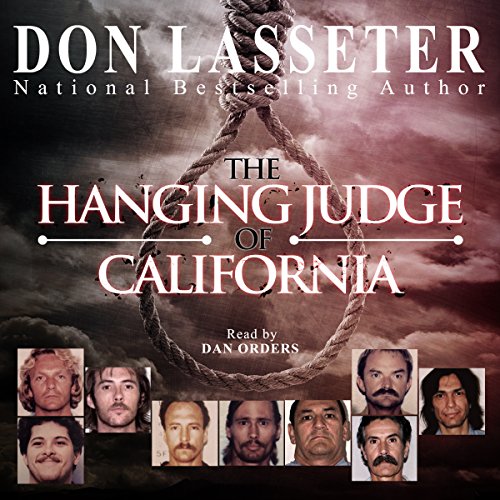 The Hanging Judge of California

By: Don Lasseter
Narrated by: Dan Orders
Try for £0.00

The audiobook chronicles Alcala's crimes and trials, as well as the horrific murders committed by eight other killers who were sentenced by McCartin. The judge, called "Solomon with the sense of humor of Roy Bean, reincarnated," provides a glimpse into his personal memoirs, with a caustic insight into the appeals process, and his encounters with rich and famous personalities. A must-listen for true crime fans and those interested in the convoluted system of the appeals courts.

What listeners say about The Hanging Judge of California

The book was originally published under the title “Perfect Justice” in October of 2004. The book was re-published under “The Hanging Judge of California” in February 2015. The book looks at the Federal Ninth Circuit Court’s overturning the death penalty. California Judge Donald A. McCartin, who sent nine men to death row, speaks out in fury when convicted child killer Rodney Alcala’s (known as “The Dating Game Killer”) verdict was overturned after twenty-three years. Alcala was retried and again found guilty and sentenced to death for a third time.

The book chronicles Alcala’s crime and trials as well as the murders committed by eight other killers sentenced by McCartin. The book is well written and informative. Lasseter obviously thoroughly researched the subject matter.

The Orange County Judge presided over the most watched criminal cases from 1978 to 1993 including the eleven month trial in 1987 of serial killer Randy Kraft, who was one of the men McCartin sentence to death. I particularly enjoyed the part of the book that tells about the life of McCartin. Judge Donald McCartin died in September of 2012 at the age of 87. Don Lasseter is a well known true crime writer. Don Orders narrated the book.

Not well written and narrated poorly

The performance of Dan Orders and whomever produced it was horrible. No one seemed to go back and edit mistakes. There were more than a couple of times that the narrator had some false starts and no one caught them to cut them out. Plus his read was nothing short of amateurish. His read really got on my nerves.

I loved this book!

Would you consider the audio edition of The Hanging Judge of California to be better than the print version?

I really enjoyed this audio book. It was an accurate account of a real judicial system. It captured me from the start to finish. As for the narrator, I think Dan Orders did an exceptional job. I hate listening to a book when the reader is so dramatic that it takes away from the story. His voice was solid which is what I expect from a courtroom drama story.I highly recommend.

Only complaint was the silent gaps between the chapters. I kept checking my iPad to see if the battery needed recharging. It didn't...just long pauses.

This book is a total story of this judge's life from his early years, previous careers and how he formed his world view. It is also an overview of the case of a famous serial killer who this judge tried. The serial killer's death penalty was overruled by a later higher court because of a decision this judge made. The judge wrote this book largely to show that this was a travesty and reflects the faults in the whole system, (and the whole of society.) Before the end of Chapter 1 I found myself thinking "This Ass Clown is a judge??? For Real???"

Early on in the book he explains that he ruled to allow the defendants previous criminal record as a rapist and kidnapper to be revealed to the jury (which of course unfairly prejudiced the case. To me that kind of ended the story right there - Of Course the Death penalty was overturned - it was lucky they didn't overturn the whole conviction - You breached one of the fundamental rules of a trial. I don't know much about the law but even I know that. The judge uses this entire book to justify that really stupid, reckless and undisciplined call.

A lot of his argument seems to consist of "He was a really bad guy," "I made the call because even though I knew I didn't have the authority to do it I knew best." and "Judges should be allowed to overrule defendant's rights if they know the guy is guilty and the crime is bad enough." I was appalled by the judgement, appalled that this arrogant old jerk risked letting a total monster go free because of his ego, and appalled to think someone who thinks this way is a judge.

From then on he tries to justify that call using the basic arguments of "The world is too PC, I know best cause I'm an old white guy, some people shouldn't have rights - and we all know who those people are." I found myself thinking "SHIT - with attitudes like that on the bench no wonder innocent people go to jail."

He then goes back through his life to explain why he has always known best, ignored rules and how this supports his judgement. Unfortunately where this falls down for me is the over all autobiography shows this judge to be an egotistical, closed minded red neck. He was always going to be a loose cannon - I'm surprised it took him this long to stuff up.

He explains that the only black pilot he knew in his military career (during the war) was not allowed to fly not based on racial bias but because he could not see at night. "How stupid to call this racist, stupid PC culture, blah, blah." (seriously - was there any PC culture in the US during WW2?) He totally ignores the fact that this is the version of events he was given at the time and never questioned. He never looks beyond his own small view and finds that black pilots were almost universally discriminated against in the same way - apparently they were all night blind??? (amazingly the entire African American population has been cured now and black pilots can fly at night - but it wasn't racism - it was just a coincidence)

Now this is not an era I know much about but if I know that and I am in 2016 Australia, how come this has never occurred to him? I get why he perhaps did not see it then, but the fact his view is totally unchanged (despite so many other black pilot's discrimination??). This tells me he is pretty set in his opinions (and frankly - not exactly a genius of critical thinking.)

To be honest because the book really highlighted that he is one of those old, closed minded white guys who tell you "Women and black people exaggerate about discrimination because I don't see it". It was like sitting down with your Grandpa and trying not to cringe while he tells you he's not racist but "We all know blacks are criminals... and everyone agrees with me but they won't say so because their all so PC" Meanwhile you're embarrassed as all hell, and asking yourself how this nice old guy you love just turned into a racist bigoted stereotype right before your eye - because what he just said is so blatantly racist and untrue. This was how I felt about the judge.

He then goes on to detail how truly depraved and evil the serial killer on trial was. He is obviously of the opinion that because the guy was so evil he was right to ignore the law and make his own call. The problem I have with this is the guy was that evil. He was a huge threat to society, and that judgement could have seen him released. Cops, Judges, Lawyers follow the rules for a reason. If no one follows the system then none of our right are safe. I'm sure every cop who deals with a child rapist would love to say "Hey I know he's guilty, let's skip the trial and just take this bastard outside and shoot him" but they don't. Why - because they have a duty to the law and society. And if they shirk that duty and indulge their own desire to do it the whole system falls.

This judge just ignored that duty. His autobiography of his earlier life only highlights that he has always thought he knew best and damn the consequences. Well in this case the consequences could have been the release of a real monster. The actual result was another trial that put the victims families through hell because the evil bastard decided to defend himself and spent time sadistically cross examining victims mothers.

All because this jerk "The Hanging Judge" shirked his duty, indulged his ego and took a shortcut cause he knew better. Clearly the reader was supposed to end cheering his anti PC Hang 'em all approach - I just found myself horrified to think this idiot is actually a judge??? STILL - why the hell wasn't he fired after this case??

PS - for a Judge , his literary skills are pretty crap too.