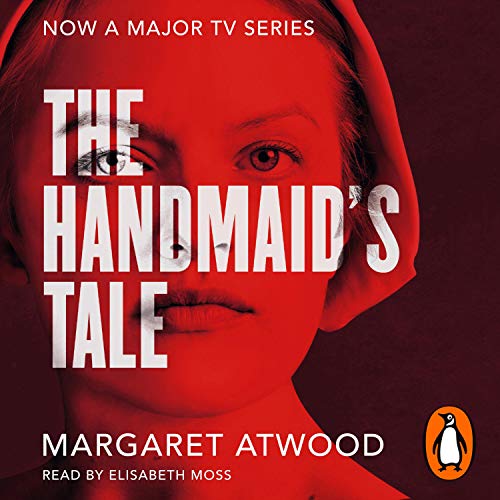 Shortlisted for Audiobook of the Year at the British Book Awards 2020.

Go back to where it all began with the dystopian novel behind the award-winning TV series.

I believe in the resistance as I believe there can be no light without shadow; or rather, no shadow unless there is also light.

Offred is a Handmaid in The Republic of Gilead, a religious totalitarian state in what was formerly known as the United States. She is placed in the household of The Commander, Fred Waterford - her assigned name, Offred, means 'of Fred'. She has only one function: to breed. If Offred refuses to enter into sexual servitude to repopulate a devastated world, she will be hanged. Yet even a repressive state cannot eradicate hope and desire. As she recalls her pre-revolution life in flashbacks, Offred must navigate through the terrifying landscape of torture and persecution in the present day, and between two men upon which her future hangs.

Masterfully conceived and executed, this haunting vision of the future places Margaret Atwood at the forefront of dystopian fiction

"As relevant today as it was when Atwood wrote it." (Guardian)

"A fantastic, chilling story. And so powerfully feminist." (Bernardine Evaristo, author of Girl, Woman, Other)

"This beautifully produced audiobook version of Margaret Atwood’s dystopian novel The Handmaid’s Tale will whet appetites for its long-awaited sequel, The Testaments, released in September.... The several narrators match the powerful heft of Atwood’s elegant, economical prose." (The Times)

What listeners say about The Handmaid's Tale

A great pleasure to listen to

Not having seen the series on TV but having watched Elizabeth Moss in Mad Men I thought she would be good to listen to. I read Atwood before and liked her style. This audio book has exceeded my expectations to an extent I didn't think was possible. Atwood's use of language is mesmerising. And listening to Moss read it was like watching to a top quality play. The story? Amazing. Highly recommend it to anyone who wants to really think about the times we live in.

As there has naturally been so much excitement over the long-awaited sequel to this book I thought that it was nigh on time that I gave it a try. First up, I can see why it did and indeed continues to fascinate so many people. Atwood's portrayal of a brutally oppressive patriarchal society is as chilling and grim as they come. While I may indulge myself with the odd zombie apocalypse it's undoubtedly true that the only ingredient you really need to create a dystopian future is the human race.

Attwood creates a fine sense of paranoia and suffocating oppression. This is a quite unrelentingly grim and claustrophobic tale of one woman's bravery in a society totally dominated by men. Atwood gradually reveals a chillingly banal process of culture being subverted into oppression, it doesn't take much to penetrate the veneer of civilisation.

It's a thought-provoking book. Personally I never thought it quite lived up to all of the hype that's surrounded it recently. The constant hankering back to previous times and need to assign wistful memories to so many everyday events was just a little overdone I thought.

Still, it's a good, if pretty grim, read and a very thought-provoking book.

I've struggled with audio versions of this book before by the original English narrator and Claire Danes. This version is by far superior. The book was written in 1985 however it could well have been yesterday and should be on the syllabus of any school. definitely worth a audible credit and now I'm eagerly looking forward to The Testaments.

Such an amazing story! I normally read quite trashy fiction and this has been such a breath of fresh air. The story is brought to life by Moss, who had me on the edge of my seat the whole time. I was truly addicted to this book and feel so sad that it’s finished!

Absolutely loved this dark and beautiful book. Elizabeth Moss’s performance is seamless. It is the best book I have listened to so far.

Brilliant & engaging from start to finish.

Bought to life by the faultless narration of Elizabeth Moss, far more enjoyable than reading the book.

Apart from Cormac McCarthy’s ‘ the Road’, this is the worst book I have ever listened to. There is no discernible plot, the characters are flat and lifeless, what dialogue there is is monosyllabic and mundane, and the back story is 2 dimensional and unimaginative. If there was even a little humour to give some relief to the interminable bleakness – but there is none, and I mean zero.

On the plus side, the narrator’s lifeless drone was perfectly suited to the depressing soulless tone of the writing. Also, I really enjoyed the finale as it meant an end to the dreary monotony.

High on promise low on delivery

I struggled to finish this book. I purchased because I missed the TV series so thought the storyline must be good.

I didn't enjoy the narration. She has a "fifty shades" type of tone with little variation. I overlooked this because I thought a great storyline would follow so I persevered.

The story feels unfinished. It revolves around a concept, an environment and a changed way of living. I feel this is all described with a series of examples but with no real story to hold it together and drive it forward.

I will not purchase part 2.

No idea why this is so revered - one of the dullest books I’ve ever struggled through.

too close for comfort

I listened to this over a few days while decorating! kept having to pause painting to listen intently. Really good narrator. I dipped in
to the tv series but I couldn't engage with it so was unsure about this book, but it's been really enjoyable - if that's the right word!

Recommended before or after season 1 of series.

While clearly there is some overlap and some of the drama is in a somewhat different order to the TV series. I think its a compelling listen before or after season 1 of the TV series.

The primary story line of the book is solely narrated by Elisabeth Moss, with the other narrators only appearing at the end outside of the main story line. I found Elisabeth Moss extraordinary. I must say at the start of the book I was a little unsure about her, I think it was the case that she did not do her best work at the beginning and normal expectations one normally has about the clearer diction typical of most professional narrators. As my expectations washed away I found myself truly amazed by the performance the way the emotion of the character was conveyed was amazing.

I found the book was able to fill in various gaps in the TV series and carried far more impact on me than season 1 of the TV series, not to say I did not find the TV series fantastic as well.

I absolutely loved this production! The story is engaging and Margaret Atwood's writing is impeccable.

There are many memorable moments in this story, but mostly it was just fascinating to actually picture the scenes and characters. The ceremonies were mind-blowing. If you want to listen to a meaningful story that is somewhat of a reality check at times for where we're heading to as a civilization, this audiobook is worth your time.

I loved the narrator. She really tells the story, she's not simply reading the words. She made me believe that all of it really did happen to her. Volume, pace, diction, tone... everything was just on the spot.

After having watched the series, I wanted to listen to the book to see how different they were. I was not disappointed, such a compelling novel, I listened every spare moment that I got, longing for long car rides to be able to listen for extended periods of time.

the best version of the audiobook

Elisabeth Moss' performance really brings the story to life. A definite must listen for both fans of the book and the series.

I expected to slowly get through this. However, I finished it much faster than anticipated. I like how they didn't get too graphic - it sometimes feels unnecessary 🙈.
I absolutely recommend this listen. Great narration.

listened to book after watching series

Like most I watched the series first. listening to the book now is super enjoyable. its great to kind of visualise the characters Margeret is describing in her book.

I could listen to this all day long and, to be quite honest, I have.

great concept. but scenes and reality hop around

continuity is confusing. you jump from reality to fantasy and scene to unrelated scene like a rabbit. maybe text is better for this one.

Elisabeth Moss is such a great narrator

I can listen to this for hours and not get bored. It's a great story and a great performance. Absolutely fantastic. Love it!