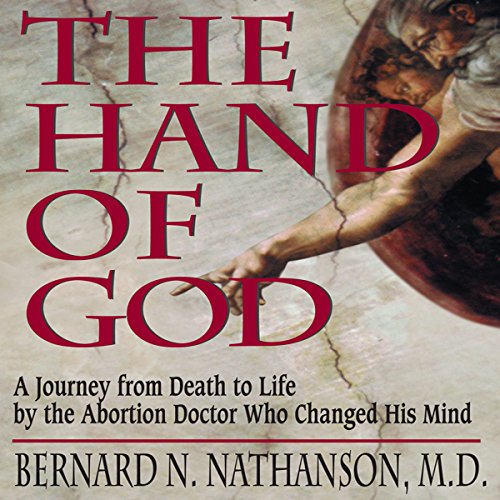 The Hand of God

As director of the world's largest abortion clinic and the nation's most prominent abortionist, Dr. Bernard Nathanson presided over 60,000 abortions. As co-founder of the National Abortion Rights Action League, he helped make abortion legal. Then, in a conversion that made headkines and astonished both sides of the abortion debate, he renounced his profession to become a pro-life advocate.

But Dr. Nathanson's journey was not over. In this deeply personal memoir, he reveals what led a lifelong atheist and abortion crusader first to the pro-life cause, and finally to Christianity.

What listeners say about The Hand of God

a very moving book . a story shows clearly why abortion is a crime and sin

A Scientific and Spiritual Defense of Life

This book is a scientific & spiritual defense of life. For most pro-abortion activists this book will be ignored... for to read the truth will make their life a lie but for those with doubts, this book is a must read. For the believer of all life is sacred, this book is an affirmation of their beliefs and gives armor in the ongoing war against human life.

A Vast Perspective on the History of Abortion

This book is not easy listening, but it is important listening. Dr. Nathanson was a very erudite and educated man and his vocabulary and literary references are rich, but his story built my understanding of the thinking process that took place in the early days of legal abortion and how it became entrenched in the minds of Americans. It also covers the history of abortion from ancient times to the present and shows perspectives on both the pro-choice and pro-life sides. It was also difficult to listen to the parts of the book that dealt with the horrifying details of abortion techniques, but the truth of that must be told. I was especially interested in the story of Dr. Nathanson's lifelong quest for God, a quest he didn't even know he was on until very late in life. The happy ending of the story in St. Patrick's cathedral when he was baptized by Cardinal O'Connor brought a tear to my eye. What surprised and puzzled me the most about this book, however, is how anyone could still be in favor of legal abortion after Dr. Nathanson's story was made known in the 1980s. He was one of the people whose influence most turned the tide toward widespread abortion, but his voice was all but drowned out when he cried out to stop it. Overall, this was a riveting tale of a tragic life which ended in spiritual triumph.

Overall it's informative and brings a lot to light on the abortion industry. You can tell he's slanted to pro life but I appreciate how he explains pro life and pro choice thinking processes because he was so pro choice before.

In the beginning it has a lot of medical jargon so I had to pray I could get through it haha but then the author started to talk about how he grew up and talked about his experience becoming a doctor and going through college. Then I felt like I got sucked into the book.

He later describes more medical things so I was a bit confused from time to time but he still explained personal and public events powerfully.

What a powerful personal transformation by Dr. Nathanson! His story is proof that there is no such thing as being beyond all hope when you decide to let the Light of the World into your heart and mind. With Christ all things are possible!

I am an evangelical Christian and a physician. I looked forward to this but was disappointed. Nathanson ignores much science on stem cells and for that matter the progress of science in defending as he calls it life. The arguments against use of one life regardless of age (i.e. Fetus) for another are clear. Using hyperbole is unnecessary and only weakens the point.

Moreover in the entire work I saw the ego of the man more than the Spirit of the Lord. In the end that's what limited my enthusiasm the most.

Could Have Been Better

Not really what I expected. The book has such a focus on the author’s life. You could just skip the first half honestly. I wish it would have focused more on the argument of abortion being moral or not and the first hand account of what this doctor had witnessed particular on an emotional level.

Not a great book

The book focuses far too much on Nathanson's early life and his Jewishness in a manner that is more or less completely irrelevant to abortion. The actual substance of the book pertaining to Nathanson's conversion to a pro-life perspective leaves much to be desired.

Riveting and deeply personal chronicle of Bernard Nathanson's journey from darkness and despair to light and life. In the end, a wonderfully brilliant and good-hearted man despite all his dark experiences.

This story is incredible and the narrator did a perfect job of telling it. I would highly recommend it.

Conversion not only religiously, but to the full picture of the implications of imposing a violent death on society’s most vulnerable of all.