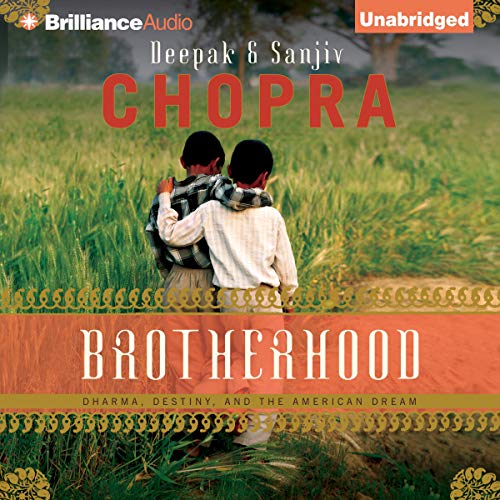 In Brotherhood, Deepak and Sanjiv Chopra reveal the story of their personal struggles and triumphs as doctors, immigrants, and brothers. They were born in the ferment of liberated India after 1947, as an age-old culture was reinventing its future. For the young, this meant looking to the West.

The Chopra brothers were among the most eager and ambitious of the new generation. In the 1970s, they each emigrated to the United States to make a new life. Both faced tough obstacles: while Deepak encountered resistance from Western-trained doctors over what he called the mind-body connection, Sanjiv struggled to reconcile the beliefs of his birthplace with those of his new home. Eventually, each brother became convinced that America was the right place to build a life, and the Chopras went on to great achievements - Deepak as a global spiritual teacher and bestselling author, Sanjiv as a world-renowned medical expert and professor at Harvard Medical School.

Brotherhood will fascinate and inspire those who still believe in America’s capacity to foster achievement and reward hard work.

What listeners say about Brotherhood

Loved it from beginning to the end. Thank you for creating this book. Mean a lot

How to Toot Your Horn

We are great, are are better than anyone in the world and will never die. We are Chopra's. Well.......

If you’ve listened to books by Deepak Chopra and Sanjiv Chopra before, how does this one compare?

Would you listen to another book narrated by Deepak Chopra and Sanjiv Chopra ?

Do you think Brotherhood needs a follow-up book? Why or why not?

I'll pat your back and mine if you'll pat mine.

Difficult to listen because of accents always nice to have the authors narrate but accents were so strong.

Another lovely and insightful Chopra Classic

Would you consider the audio edition of Brotherhood to be better than the print version?

Yes I am always glad to hear Deepak's voice and enunciation

The color and diversity of Deepak's wide range of topic and wisdom are always fulfilling.

What about Deepak Chopra and Sanjiv Chopra ’s performance did you like?

the interplay between their respective stories and their memories and humor.

it was profound...ina unique manner

this is a comprehensive review of some of Deepak's vast experience in the human life. it adds so much more vlue to Deepak's wide experience and philosophy and yes science.

I found this story very interesting. I have been interested in Deepak's message for a number of years. I lived in India for a couple of years but still learned a lot about India from this story. I was also interested in their story about immigration and adaptation to their new home. Even more so as I was born and lived in the US for 28 years. Then I left and really have no wish now, after almost 50 years, to return. Things have changed so much. I was especially interested in what they found good. I really enjoyed hearing about the brothers journeys in life and how they got to where they were at the writing of this book. Very easy to follow this story.

This is an interesting review of well known personalities and their histories. It tells personal details of their lives but is more a plea for greater awareness of the contribution of immigrants. The US has accepted and adopted immigrants since its inception and this book asks for continued encouragement of the processes needed. This political, spiritual and familial package is one you are likely to find something to enjoy.

I loved the frankness of this memoir. The fact that it was narrated by Deepak and Sanjiv made it even more personal and special. I enjoyed hearing about their triumphs, their disappointments and each of their love of family. Sanjiv first seemed gruff and opinionated, but I grew to really love and appreciate him over the course of the book.