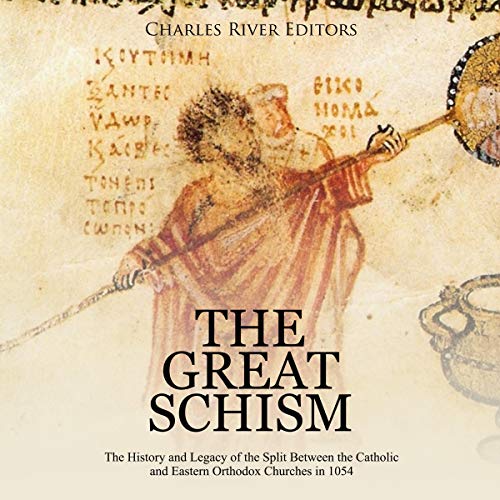 By: Charles River Editors
Narrated by: Stephen Platt
Try for £0.00

For nearly a thousand years following its foundation, there was only one Christian church. Centered in the city of Rome, the church expanded and grew until it became the dominant religion in Europe and beyond. The early growth of the Church had been suppressed by the Romans until the Emperor Constantine became the first to convert the empire to Christianity. From that point forward, the growth of the Church was inextricably linked with the Roman Empire - the most powerful military, economic, and political force in the ancient world.

For almost 600 years, from the defeat of Carthage in the Second Punic War in 201 BCE to around 395 CE, Rome was one of the most important cities in the world, but things were beginning to change around the time Constantine converted the empire. Rome controlled large areas of the world, but by the fourth century, the emphasis had shifted from military conquest to the control of lucrative trade routes.

The problem was that the city of Rome, isolated in the southern half of the Italian peninsula, was far from these routes, and this compelled Constantine to establish a major Roman city on the site of ancient Byzantium. The new city Constantinople was located on a strategic site controlling the narrow straits between the Black Sea and the Aegean, meaning it was firmly astride some of the most important trade routes in the ancient world between Europe and Asia and between the Mediterranean and the Black Sea.

However, not all power and influence shifted east, because one important institution remained firmly linked with the city of Rome: the bishops of the Church. Under the rule of previous emperors, Christian bishops had not only been formally recognized, but had been given power within the Roman state.

The most important of all was "I Sommi Pontefici Romani” the supreme pontiff of Rome. The earliest holders of this title were martyrs and saints of the Church, but by the time of the rise of Constantinople, this role was elected by the other bishops of the Church. This role would later become known as the Pope (from the Greek word “pappas” meaning “father”), but even before that title was adopted, the supreme pontiff in Rome was widely recognized as the leader of the Church. In historical terms, these early leaders of the Church are often referred to as “popes” even though that title was not formally adopted until after the division the Church.

Rome’s preeminence was not a situation that was welcomed in Constantinople, now the center of the Byzantine Empire and a thriving and wealthy metropolis. After being sacked by outsiders, Rome had become a virtual ghost town, partially ruined and inhabited by a small number of hardy survivors. Yet, in center of the crumbling city was the Vatican Borgo, the palace of the supreme pontiff and the heart of the Church.

In retrospect, it is easy to see that this was a situation that was bound to lead to conflict and disagreement, with the Greek-speaking Eastern Orthodox Church centered in Constantinople and being governed by Latin-speaking popes in a faraway city. Moreover, there had already been theological disputes as far back as Constantine’s time, which had led to the famous Council of Nicaea in the fourth century CE.

This audiobook chronicles the events that led to the schism, the key figures that played a hand in the confusion, and how the contentious issues were finally resolved.

What listeners say about The Great Schism

A Quick cure for ignorance

If you thought the "Filioque was the sole cause of the Great Schism, this short work will give you the fuller picture ina scholarly enough fashion from politics to religious practice. Stephen Platt has a great voice and reads fluently, but some American and modern Italian pronunciations jarred a little with this English listener.

I listened to this mostly while doing laundry and it was great, though a little boring/hard to follow at times. I would not recommend listening to this while completing a task that requires attention, but for household chores and yard work it's great.