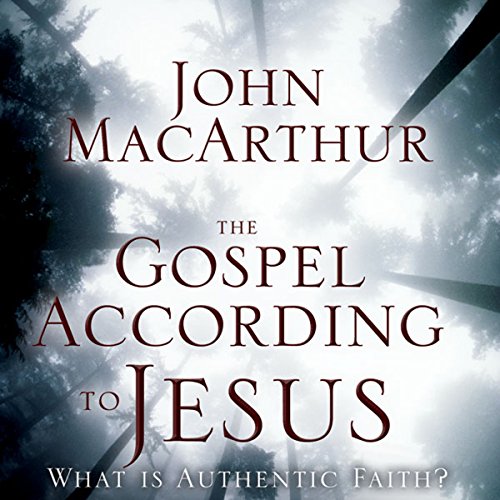 The Gospel According to Jesus

By: John MacArthur
Narrated by: Tom Casaletto
Try for £0.00

What does Jesus mean when he says, "Follow me"? Twenty years ago, pastor-teacher and best-selling author John MacArthur tackled that seemingly simple question and wrote a book that has since taken its place among Christianity's classics. This 20th anniversary edition of MacArthurs provocative book has been revised and contains one new chapter.
©2008 John F. MacArthur Jr. (P)2009 Zondervan
Bible Study Christianity
Show More Show Less

What listeners say about The Gospel According to Jesus

Mac Arthur at his best

there are times when speaking that Mac Arthur's abruptness and bare faced honesty (to call a lie bare faced in this era is to misunderstand the world in which we live) can feel so cutting that one is left to wonder if there is a soothing bone in his body.
this book is where that doubt rests. it is written in a tone that, rather than the ravening Pastoral passions of a hell fire and brimstone pastor, this book is penned as with a grandfather who educates and console's a beloved grand daughter who has fallen out of the tree. I've come to the conclusion that debates between theologians and atheists are nauseatingly pointless to the point of becoming perhaps sinister in their nature, like the pointless conversation we are told to avoid in Timothy and Titus, so I was dubious as to whether or not I would get much out of this book as I heard about the theological debate this book caused during its introduction. I needn't have worried. I found out that Mr MacArther has a heart as soft as spun silk towards the beloved. I'm also seeing the father heart in some of his most pointed statements. he is the voice of the father heart in this book.
I still haven't found where it says that there are no pets in heaven in the Bible, though I have seen where the lion will lie down with the lamb. literal imagery perhaps written to sound poetic and so easily mistaken as metaphor. I also imagine the good shepherd whistling and every animal ever made, wagging its version of a tale and standing to obedient attention, as should we. Death, I believe came only from Adam, but not damnation for the animal kingdom. Death was necessary for the animals as it was for Cain, but where men are consciously aware of their sin animals haven't got the knowledge of right or wrong.
anyway I digress, to a bugbear I have with the wonderful John MacArthur. Maybe I should write a book on the subject. until then, preach the gospel to all creatures, starting with your dog. they are a great person to practice on. not to cast pearls before swine, but to rid yourself of social anxiety when declaring the gospel.

The Lordship is established, many issues surrounding the Gospel addressed and the necessity of the law is also mentioned. Worth a read.

This message needs to be heard

Before listening to this book I was approached by someone I respect in the faith who "feared" I might be in the Lordship salvation camp. At the time, I had no idea what he meant. That night I started to do some research on both sides of the argument. Most of the more modern writings on the Lordship Salvation argument mentioned this book, so I started listening to it. This book is accurate and gives detailed explanation and expository teaching based on the gospels. What I really liked about this book is that the author not only provided his own view, but he also repeatedly throughout the entire book, quoted opinions and strong arguments from the other side. He then of course explained in his words why he didn't think those views were valid. This is definitely worth a listen. Although now that I have heard it, it is one of those books that I think I might want to own a physical copy so I can easily recall certain pages or arguments.

John MacArthur at his best

I would have to call this a must read for all Christians! It really opens your eyes to ideas and a view of scripture that is not mentioned from many pulpits. Well worth your time.

Listening to this book made the time fly by - I just kept talking back to it. "Thank you", "Yes!", and, "So, THAT's what that means!" were heard from me throughout my listening. I found myself wanting to go to my Bible to highlight a passage and make notes, so beware if you're listening in the car!

The only thing that could have made this better is if John MacArthur had taken the time to record the reading himself. The reader at times had difficulty expressing the author's intent and enthusiasm, and even mispronounced a couple of words, but it did not detract enough from the presentation for me to reduce a star.

John MacArthur hits tough issues of doctrine head on with clarity and poise. Sadly, the narrator does said poise an injustice by mispronouncing many key words as though unfamiliar with the subject matter. While it is not severe enough to recommend passing over this title, it might be worthy of consideration that the production company record a revised version with a more competent narrator.

Reveals The Teaching of Jesus on Conversion

This audiobook is focusing on the matter of the Lordship of Christ being preeminent when one seeks salvation. Rev. MacArthur points out that one cannot get saved and make Jesus Lord later, He is Lord over one's life when one comes for salvation, or it is an indication that one is not turning one's life over to Him. Such a position would mean that one is not then translated out of the Kingdom of Darkness and into the Kingdom of Christ as one would be coming with reservations and not really to repent and convert. Instead, one would be seeking something with an ulterior motive, a somewhat deceptive action of seeking something without a change, without being convinced that Christ is the Way, the Truth and The Life, but just a way to avoid judgment and punishment for sin. He points out that Jesus requires that one be translated out of the Kingdom of Darkness and into His Kingdom, or one is not save.

Excellent book! I'll read it again and again! I suggest you do as well. Brilliant!

I love this book!and I have learn a lot from it.

Truly, truly, I am looking forward to reading this book again, I learn a lot from it.

Will read this book again.

Why did I not get it sooner

Where does The Gospel According to Jesus rank among all the audiobooks you’ve listened to so far?

Listened all at once and then went back

Bought an addition book after listening

a book on biblical faith

worth it. it just teaches what the bible teaches in a clear strait forward and unignorable way.