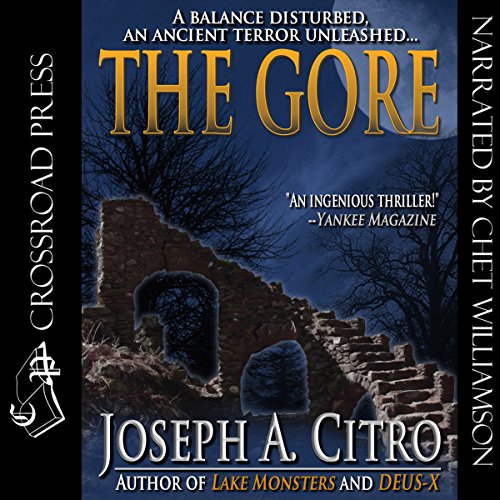 By: Joseph A. Citro
Narrated by: Chet Williamson
Try for £0.00

Ex-newspaperman Roger Newton's adventure begins when Claude Lavigne, a power company employee, sees something in the forests of "the gore" - a tiny swatch of unclaimed land created by a surveyor's mistake. His sense of reality unhinged, Lavigne commits suicide. When Lavigne's son, best friend, and an old black man risk an expedition into the gore, Newton, attempting to stop them, upsets a fragile balance and looses an ancient, nameless fear among the people of Vermont.

What listeners say about The Gore

A layer cake of bigotry.

Keeping in mind that this book was written in the eighties, there's still no excuse.

bad ending to an ok book

The end was really bad, the rest was done pretty good but that ending lost me.

The story started out great and I was engaged that was until the racial slurs started flying. I love and respect Chet Williamson's narrations he really brings stories to life with his phenomenal voices but even he could save this racist garbage. This will be my last book from this author. I received this book for free and this is my honest review.

“I seen something in the woods today.”

“I seen something in the woods today.”

Man, I couldn’t get Brian Keene out of my head the whole time I was listening to this one. It did have a bit of Keene style to it, but honestly, I think it’s Chet Williamson’s narration that does that to me. Every time I hear his voice no matter what he’s narrating, I think of Keene. They’re like peas and carrots.

That being said, I think Citro stands on his own here. The story is good (not great) and the writing was smooth despite getting bogged down with a bit of cheese at the end. I even liked how the title was a wee deceiving and the gore ain’t at all what I thought it was.

I liked it. I’m giving it 3 stars and reserving the right to bump it up a bit after further contemplation.