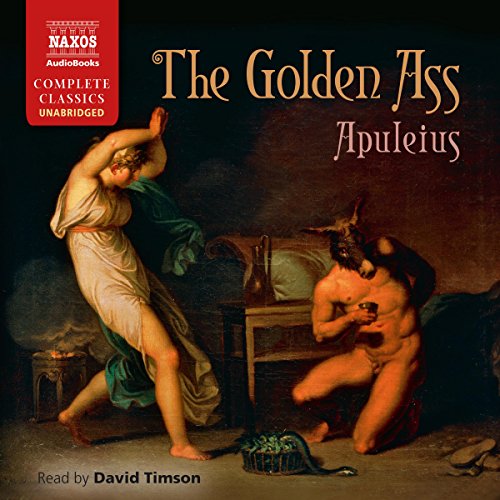 "In this hapless state I looked myself over and saw that I was now no bird, but an ass...."

In this ancient picaresque adventure, Lucius, an insatiably curious young man, finds himself transformed into a donkey after his fascination with black magic and witchcraft goes awry. While trapped in his new body, he becomes the property of thieves, farmers, cooks, soldiers, and priests, and observes the hypocrisy and ineptitude of Imperial Roman society. The Golden Ass is considered the only novel to survive the Roman period, and the earliest novel to survive complete in the Western literary tradition. It is brimming with slapstick humor and sexual escapades, and foreshadows later works by Boccaccio, Rabelais, Cervantes, and Chaucer, upon whom it was a direct influence.

What listeners say about The Golden Ass

A super translation and reading of a very entertaining and amusing story. It also gives a fascinating insight into Roman daily life and religion. Highly recommended.

For one of the oldest complete novels in history, It certainly isn't boring. A great read.

That’s how Lucius, our hero, describes himself near the end of his odyssey in an ass’ shape. And the same can be said of anyone who has tagged along with him. In the course of this picaresque pastiche, we encounter all levels of humanity in the Greco-Roman world. Starting with the likeable rogue who serves as our narrator, we meet concupiscent wives, corrupt priests, malevolent witches, rapacious landlords, seduce-able servants, tight-fisted millionaires, profligate millionaires, even a legionary unable to defend himself from the fists of a poor old gardener. In his ass’ guise Lucius discovers that animals can be just as bad. C. S. Lewis wrote of, “…the peculiar quality of the [Golden Ass], that strange compound of picaresque novel, horror-comic mystagogue’s tract, pornography and stylistic experiment”, and he was about right.

In fact, it was Lewis who prompted me to listen to Apuleius. Last February I picked up his final novel, Till We Have Faces (1956), as a Daily Deal. Having learned that the book was written out of Lewis’ near-lifelong dissatisfaction with aspects of the story of Cupid and Psyche as told in The Golden Ass, I thought it would be a good idea to know that book first. Having just finished Till We Have Faces, it’s a course of action I can’t recommend too highly.

David Timson is, as always, spectacular. He doesn’t just read, he performs—and he has plenty to work with here. His Lucius is a charming, susceptible, morally obtuse young man who may—or may not—be a reformed character by the end; the final book has perplexed more adroit readers than me for the past 1,800 years.

It gets to be a bit tedious hearing classics, over and over again, being translated into smug Edwardian, British English. Must that aesthetic paint be smeared across the classics?

Magical tale from Ancient Roman Empire. The theme of this book is don’t play with forces, you don’t understand.

Rich Kid fascinated with occult forces, gets more than he bargains for. They don’t make stories like this anymore. Wonderfully entertaining narrator.

The Golden Ass is a classic Roman story about a man, Lucius, who is fascinated by magic and witchcraft. He encounters a woman, witch/sorceress, who turns him into an ass/donkey. He is passed from owner to owner as he suffers under some owners and is revered by other owners. The story of Lucius is filled with all sorts of sorted villainous predicaments that are considered extremely vile in current times. The ease that some of these horrendous crimes or talked about makes one wonder of the vileness of the Roman people in general. Although none of these Val lacks or ever mentioned in much detail they were left more to the imagination of the reader as pre- or post references to the acts. The story of Cupid and Psyche was one of the tills that one of the owners of Lucius told. At the end, Lucius was visited by the gods, Venus and Isis, and transformed back into human form. Overall it was a very enjoyable book to read and I would suggest anyone that is interested in Roman Mythology as a good read in that genre.

This is a superb translation and performance of this ancient classic. Any fan of Mythology will gain a new understanding of a favorite myths.

Narration was good thats all

the narrator did a great job, however I found the novel itself to be very confusing there were too many stories interwoven and it didn't make a ton of sense.

if you're looking for something to entertain and excite you, will also having some of the best phrases in all of literary history you should really look at the golden ass. the stories are still very close to hitting and surprisingly they deal with a lot of the same things that modern people are worried about.