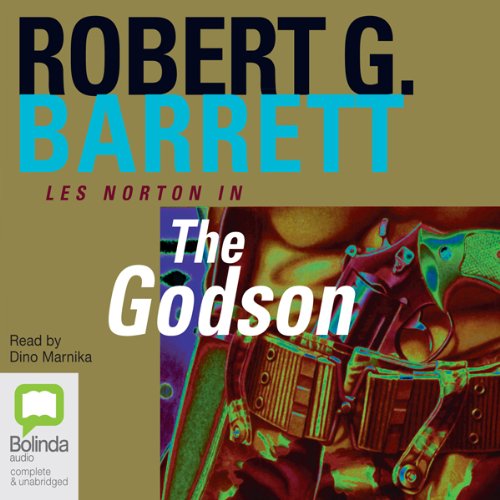 Les thought that playing minder to Peregrine Normanhurst III sounded like a dead-set snack: Les would keep Peregrine out of trouble. So what if he was on the run from the IRA? They’d never follow him to Australia… But Les quickly finds himself thrust into an adventure that moves at breakneck speed from the corridors of power in Canberra to the grimy tenements of Belfast, to climax in a nerve-shattering, blood-spattered shoot out on a survivalist fortress in the Tweed Valley.

What listeners say about The Godson

Listened to this book 3times now and loved every minute . A true legend Mr Barrett , and a Great loss . Thank you .:-)

Love this author and narrator

Love this author and narrator. Just a romping good story. It is very funny in an unique Australian way. I am not sure that non Australians will understand the book

Would you consider the audio edition of The Godson to be better than the print version?

only had the audio version

Which character – as performed by Dino Marnika – was your favorite?

les norton he is a cool swarve aussie bloke

section made me laugh and section had me in slight suspence

Robert Barrett has a turn of phrase that makes me laugh out loud, which is actually a rare event. Thus, his new books always went to the very top of my reading pile, and the audios are right up there aswell.

Unfortunately he passed away but his writing hasn't...