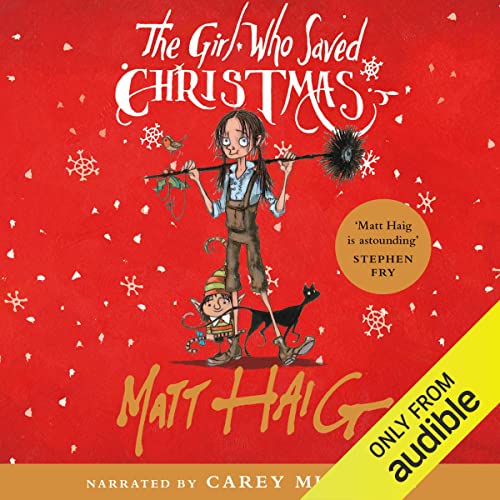 The Girl Who Saved Christmas

By: Matt Haig
Narrated by: Carey Mulligan
Try for £0.00

As well as being a number one best-selling writer for adults, Matt Haig has won the Blue Peter Book Award, The Smarties Book Prize and has been shortlisted three times for the Carnegie Medal for his stories for children and young adults. The idea for the A Boy Called Christmas series came when his son asked what Father Christmas was like as a boy.

Journey to the edge of magic.

If magic has a beginning, can it also have an end? When Amelia wants a wish to come true she knows just the man to ask - Father Christmas. But the magic she wants to believe in is starting to fade, and Father Christmas has more than impossible wishes to worry about. Upset elves, reindeers dropping out of the sky, angry trolls and the chance that Christmas might be cancelled.

What listeners say about The Girl Who Saved Christmas

The Girl Who Saved Christmas

I couldn't help myself I had to read this one too, it is just as good as the first, incredibly Dickensian, not everything goes smoothly for Amelia, but the situation improves greatly. Carey Mulligan, is a natural born storyteller. I'm sorry that I'm finished, I enjoyed both this book and it's predecessor so much, I'm going to have to start again soon.

Not what I'd hoped for this Christmas...

I have read a couple of books by Matt Haig and eagerly awaited this publication. To be honest, I was a bit disappointed. I hoped to play the book to a six year old girl, and listened to it myself first. In fairness, I have not played it to her, nor will I.
Quite early on in the book we are faced with the death of a young girls mother, and Matt does an excellent job in taking us through this grief... But is that even an idea that I want to install in a six year old head? Not at Christmas, anyway. An amusing story follows with Father Christmas having a few troubles with elves and trolls and the like. There are a few clever references, interesting characters and funny anecdotes. The story switches between 2 or 3 sub stories in the way many recent popular adult novels do, but is this easy for a child to follow? I had lost some interest by the time I reached the conclusion.
There are better books for children at Christmas and better adults books but this author. On this occasion I don't think the two mixed too well.

Traumatised my six year old when the mother died

What would have made The Girl Who Saved Christmas better?

A warning to parents that the girl's mother dies at Christmas. My six year old was devastated.

What could Matt Haig have done to make this a more enjoyable book for you?

Not marketing it as a happy book, suitable for children.

Sadness, grief and fear in my son when the main character's mother died on Christmas Eve. Had I known that kind of darkness would happen, I would never have bought the book for him to listen to. Other reviewers said it was suitable for young children. It isn't. It should have come with a warning.

If you could sum up The Girl Who Saved Christmas in three words, what would they be?

How it builds on the world previously created by Matt Haig. Also, how Amelia overcomes a personal tragedy to help save Christmas.

It was just lovely. I 'm a 47 year old man and it whisked me back to childhood school days being read to by a favourite teacher!

A great sequel to A Boy Called Christmas. It had a touch of Charles Kingsley's Water Babies to it. I wish someone would option these books and make a film of them. Done right they would become a Christmas TV staple.

What did you like most about The Girl Who Saved Christmas?

I liked the simplicity of the story and the magical atmosphere

Have you listened to any of Carey Mulligan’s other performances? How does this one compare?

Yes and it completes very favourably.

Yes, it was easy to listen to all in one sitting

funny, heartwarming story for all the family

"I liked the fact Santa had such a wonderful sleigh with wonderful things in it" 8 year old
"I liked the bit where amelia escaped" 6 year old
"it was funny when there were cracks in the floor and some arms reached out to get the elves" 4 year old
" I just loved the thing that talked" 2 year old (I think she is just approving of the whole Audiobook format!)

Quite possibly the worst Christmas story ever written. Not for little kids unless they are happy with the prospect of Santa getting shot in the belly, and other assorted violence.

One for the grown ups too!

My 7 year was engaged the whole way through. She couldn't wait for the next listening session!

This story has everything a Christmas story needs and is told fabulously by Carey Mulligan.

I knocked off a star (a quarter of a star really) because I think this recording would have benefitted from some music to denote the change in chapter/location as it switches between the human world and elf world and the breaks are not always immediately clear.

The girl who saved christmas

Best book ever!!! AMAZING FANTASTIC best book loved it it was very funny!You should read this!!