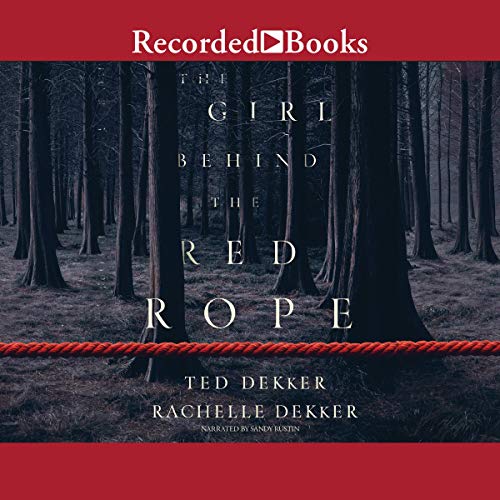 The Girl Behind the Red Rope

By: Ted Dekker,Rachelle Dekker
Narrated by: Sandy Rustin
Try for £0.00

Ten years ago, Grace saw something that would forever change the course of history. When evil in its purest form is unleashed on the world, she and others from their religious community are already hidden deep in the hills of Tennessee, abiding by every rule that will keep them safe, pure - and alive. As long as they stay there, behind the red perimeter.

Her older brother's questions and the arrival of the first outsiders she's seen in a decade set in motion events that will question everything Grace has built her life on. Enemies rise on all sides - but who is the real enemy? And what will it cost her to uncover the truth?

For the first time, best-selling authors Ted Dekker and Rachelle Dekker team up and deliver an intense, tightly focused ride through the most treacherous world of all.

What listeners say about The Girl Behind the Red Rope

We all need to face this...

I admire the authors for tackling the subject but they did do in such a good way...

I highly recommend this book to Ted Dekker's fans. I 've read more than 30 if his books so far. The others are on my list.
definitely 5 stars .

could not stop listening until the end

this story had me hooked straight away. Great book to listen to. felt quite tense at times

Takes a long while to cut itself short

Starts out fantasy,
Develops into thriller,
Ends like The Shack

Overall is was good. Certainly thought provoking but perhaps a little drawn out at first and then too short toward the end. Credit for the depth of insight into the repercussions of religion and faith. Worth a read/listen.

The story is comparable to what the disciples faced in Acts when confronting the religious leaders with the truth of Jesus Christ. So, in that aspect, I liked it very much. However, Ted gets a little carried away with implying that government and laws only exist out of fear. He implies that those who break laws should not be punished because that isn't "love." As usual, Ted takes his desire to emphasize the importance of love over religion a tad too far. But overall it was a gripping story with some good supernatural elements and a narrator I could listen to forever.

Not a Mystery or Thriller

Not judging here but this is mostly Christian propaganda disguised as a story. This was not for me.

I knew going in what the underlying story was going to be. It's why I read anything these two, individually, write. I was interested to see how they would work together. I had no doubt it would be awesome, with Tedd's ability to parableize deap truth and Rachelle's ability to enhance the human element in a story, they had to work well together. Well, I was right.

Was looking for something fun that my middle school self would have liked to follow up a super heavy book. Angels and cults and cool stuff at first, but it devolved into some bizarre new age Christian propaganda. And it wasn’t even written that well. The narrator tried her best. One of the worst books I’ve ever read

Couldn’t put it down!

Ted Dekker always has a way of illustrating biblical Truths in a way that makes them so real, even with stretching the boundaries of reality. The revelation Grace has at the end illuminated a battle I’ve been personally struggling with the past few years to walk away from the fear that grips and identify fully with the light. Thank you for writing this book, it completely changed my view on fear, guilt, inadequacy, to see it as what binds and not beneficial as it has been taught to me (by the world’s wisdom) even at church!

I've liked Ted Dekker for sometime. I love the way he pushes the envelope. That says more about me than him I suppose. But this novel by he and Rachelle was outstanding. It may be because I was going through a difficult time where fear had attempted to push into my life where it was unwelcomed, and I was having quite a tussle with it. Reading this book at that perfect time was divine intervention.

I don't care if you pick it apart theologically or not. Fear is the antithesis of faith. There is NO, NONE, NADA fear in the love of Christ. The more we wrap our hearts and heads around the depth of Father God's love, the less we will sin and commit wrong acts and that is the way God designed it to be.

To just follow rules is as Jesus said, "whitewashed sepulchres". Dive deep into God's love and dwell there and you will be clean from the inside out.

THIS book reminded me of that! CONGRATULATIONS Ted & Rachelle!!

not my cup of tea

I have been curious about this author for a while. The reviews for this book very favorable so I figured this would be a good time to give him a try. I enjoy a good book from Christian author. I was already questioning the wisdom of this decision. 10 mins into the story. To be fair I stayed with it through chapter 4 but its just not for me. I find people who exploit religion intolerable so the storyline held no appeal. This one was a waste for me

Love the book , if you believe in a higher power which i do, ir probes the effect of fesr, love and relationships wirh an almighty God

A great story. A great reminder of what we should be living. So happy I got it.

Amazing!! One of my new favorites.

Best book I have read/listened to in a long time. At first I could not understand where it was going and almost thought it silly, then before I knew it, this book changed my life. One I will refer back to, just to close my eyes and listen, and learn. The best kind of books, that can teach you something without being boring. I want to start it over and listen again! Right now! I’m so happy I found this book!