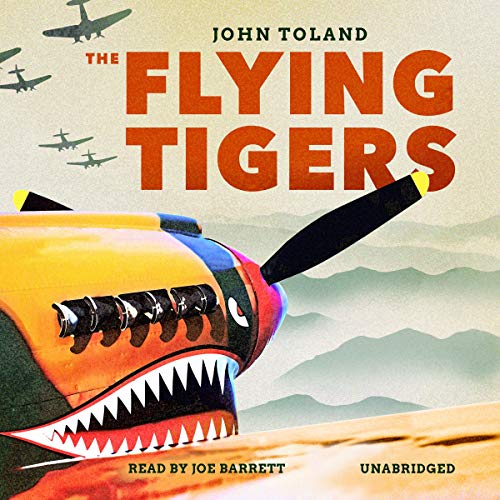 By: John Toland
Narrated by: Joe Barrett
Try for £0.00

During World War II, a group of American fighter pilots roamed the skies over China and Burma, menacing the Japanese war effort without letup. Flamboyant, daring, and courageous, they were called the Flying Tigers.

The Tigers - who had been recruited from the Army, Navy, and Marines - first saw action as a volunteer group fighting on the side of the Chiang Kai-shek's China against Japan. Trained in the unconventional air-combat tactics of their maverick leader Claire Lee Chennault, they racked up some of the most impressive air victory records of World War II.

This is the story of Chennault and his magnificent Tigers - and how they performed the impossible.

What listeners say about The Flying Tigers

Not a good book or source

This is not a very good book at all it is very misinformed as to its claims. A good example is there is no solid evidence that Claire Chennault ever fired a shot in anger yet this book claims that he had 40 kills.Also the author knows nothing about the types of aircraft he describes the Zero and the Oscar and the Nate were all different aircraft not improved versions of the Zero. This is an outright falsehood of which there are many more in the book. I would not recommend this for anything but entertainment as for research value it is a zero.

Believe Mr Toland had some facts incorrect about the Zero. The Zero never has fixed landing gear and the Oscar was not an improved Zero, it was a completely different aircraft.