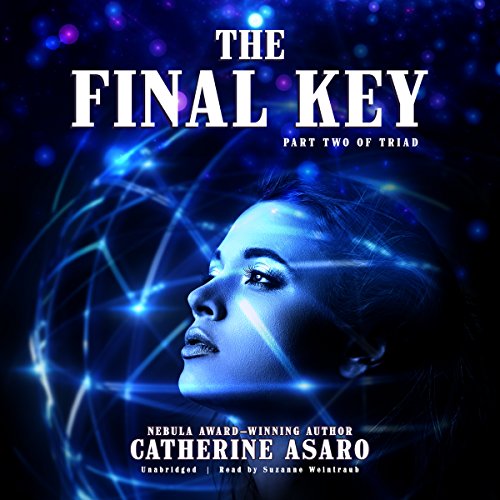 By: Catherine Asaro
Narrated by: Suzanne Weintraub
Try for £0.00

The Final Key is the completion of the duology Triad, which began with the novel Schism and which reveals the epic story of how a war of galactic proportions first exploded between two great empires and how the Ruby Dynasty reached maturity. Schism ended with the Skolian Empire torn asunder by personal conflict within the royal family. With The Final Key, the Skolian Empire comes under all-out assault from its nemesis, the Euban Concord (Traders). They have undermined the empire via subterfuge and assassination, leaving it ripe for conquest. The Skolian Empire's only hope - a young woman barely out of her teens who hasn't even completed her training as a cadet.

What listeners say about The Final Key: Part Two of Triad

I like the story and the world building but I just can’t stand the reader. This is the third Skolian Empire read by this narrator and she hasn’t done a thing to correct her myriad mispronunciations. Every time she says “posion” for “psion” I cringe. Psychology isn’t pronounced “posychology”. Additionally, her reading is robotic and all characters sound identical. Life and death situations are narrated like discussions on the weather.

I feel strongly that authors should be more forceful in the selection of narrators for their work. A bad narrator can do much damage to a good book.

This narrator should be incarcerated for this and other travesties she has wrought in Catherine Asaro’s works. How this was allowed to happen, and in multiple books, is entirely beyond me. MAKE. IT. STOP.

I wish the author had done a proof on the audio. I love Me. Weintraub's voice , but there were so many mispronunciations it detracted from the content. Psion- the P is silent. Behemoth- accent is on 2nd syllable... and many others.

another awesome novel by Master Asaro

another awesome novel by Master Asaro. I must have the entire series. I hope I can purchase them all here.

Frequently jarred by mispronunciation particularly of psion and Qox.

Wish I could still see well enough to read books.

I think several chapters are repeats from Schism.

I like many of the Skolian Saga stories, though the books get tiresome with repetitive exposition.

I don’t expect to want to relisten this.

Story itself is quite excellent. It is extremely well written and has an intriguing plot. The only issue I had was that this narrator always says Phaw Scion, Phaw this and Phaw that, it's really quite annoying. I guess she also says Phaw sychology or Phaw sychic too. She should know the 'p' is silent as all the other narrators seem to know. The recording teams should delete the thousand or so Phaws in this book as well as the first of the triad books.

Carries on from the last books. This is a romantic, action packed series. I can't wait for the next book to come to audible. I read it on kindle, and it was great. The pain causing pleasure problem is really compelling. No idea how they can solve the issue of "providers" and "Artisos."

Loved the book. Thoroughly enjoying the series. Asaro has created an intriguing Universe to explore the boundaries of physics, social structures, and good vs evil. I highly recommend reading this series in chronological order rather that order of year published.