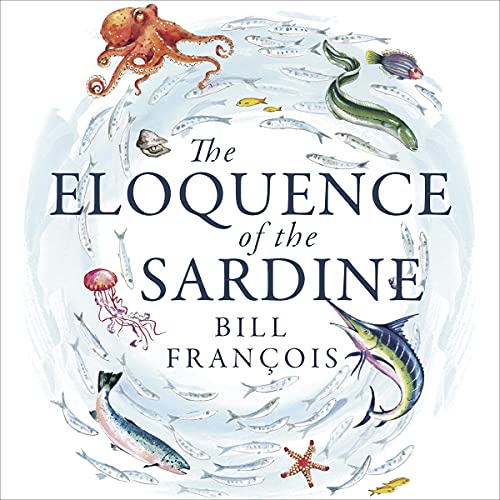 The Eloquence of the Sardine

By: Bill Francois
Narrated by: Simon Shepherd
Try for £0.00

Humans have identified just a fraction of the 2.2 million species living in the sea. Roughly 91 per cent of all marine species remain unknown: myths still to be written, discoveries still to be made, blank pages with room to dream....

As a small boy, Bill François was frightened of deep water. Until a chance encounter with the elusive sardine set him on course for a life in marine science: a mission to better understand, and preserve, the underwater world, to find his place in that ecosystem and learn how to converse harmoniously with the ocean.

In a series of exquisitely rendered vignettes of marine life, François invites us on a whistle-stop global tour to reveal the mysteries of the sea, beginning with the simple eloquence of the sardine. He unpicks the sound of the sea - an underwater symphony orchestra voiced by a choir of fish - and deciphers the latest scientific discoveries on the immunity of coral and the changing gender of wrasses. We visit the depths of underwater Paris as François delves into the mysterious world of the eel and explore an extraordinary three-generational friendship between humans and killer whales, and the role a shoal of herrings played in Cold War tensions.

Throughout, François effortlessly brings the inner workings of fish to life - their language, their emotions, their societal rituals. He also makes a case for why we should look to the sea for inspiration for improving society and investigates the shocking journey from sea to plate.

Drawing on history, myth and legend, but always grounded in science, The Eloquence of the Sardine will change the way you think about the sea in the most poetic of ways.

What listeners say about The Eloquence of the Sardine