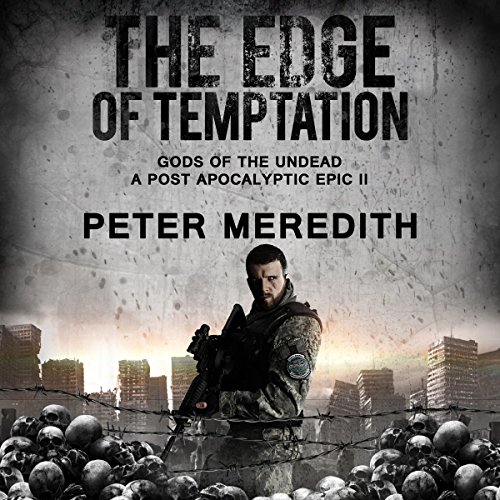 The Edge of Temptation

By: Peter Meredith
Narrated by: Steve Rausch
Try for £0.00

Eighteen months have passed since New York City was destroyed and Jack Dreyden is still crisscrossing the nation, going after stray demons, only he isn't taking them on as a necromancer dealing in the currency of stolen souls. No, Jack is battling as a sorcerer using his own soul to power spells that he is just beginning to master.

Jack thinks that he is the hunter, hot on the trail of his cousin, Robert Montgomery, but in truth, he is being played, maneuvered into ever more dangerous traps and pitted against every sort of outlandish creature that can be found beyond the gates of hell.

Robert wants him out of the way so that he can be free to go after something huge, a relic out of forgotten history. A weapon that will tip the scales in his direction and make him an equal to the Gods of the Undead.

And only Jack has any chance to stop him. Blood, death, destiny, and the ultimate sacrifice bring Jack to the edge of temptation. The darkest temptation.

What listeners say about The Edge of Temptation

Just as good and captivating as the 1st.

What a great listen, I was hooked completely and couldn't wait to listen to the next part each time. Just a great series that I would recommend to anyone.

great original story. I really can't wait for the next book. please hurry thank you

Jack and Cyn are trying to fix the world of the remaining demons while hunting for Robert. The changes in Jack did to the things he had to do are sensitively written and his relationship with Cyn is tested for and again. The book continues to explore good versus evil, Good versus demon and gives situations where the reader can question, "What would I do?" Brilliantly written as always. Gripping, taught, horrific and romantic at times. Very well read by Steve Rausch. He brings the characters alive and adds to the tension and horror. Highly recommend.

Not as Cover Suggests..

What disappointed you about The Edge of Temptation?

Looking at the cover, you'd think this is a post apocalyptic book with soldiers, dead people and crumbling civilization. Well, dead people it has. Somewhere in the book soldiers pop up, although their so insignificant I don't remember them. I got this book because the first was pretty interesting...a PA novel with a twist, academics using ancient magic to bring upon demons, which turn people into zombies, sort of. The magic was neat, the history of the ancient arts the characters performed was well written, but I assumed it would be more than that. If you're into that read the first book, much better. This one is one magic spell after another after another after another. Pretty soon I was like, ok I get it, another demon is coming. ,And each one was the demon to end all demons. Until the next. It was all about getting to the next safe location, (that which had no demons yet) whether that be a clearing in the grass or a rooftop to have enough time to cast the next spell to kill the next demon. I don't even remembered how it ended, I'm just glad it did.

Oh and the main character is in love with his cousin. Ewww.

Has The Edge of Temptation turned you off from other books in this genre?

His performance was fine.

Peter Meredith does it again. I am listening to all his books as they come out. This is another great story

A good followup to the first book.

I enjoyed this book, though not quite as good as the first one. The narration was okay but the first was better to me. Ready for the next book

can't wait for book 3 ! number 2 sets it up to he a killer series

can't wait until the next book totally different from other apocalypse stories. so worth the time.

Can not wait till the next

Loved listening to this. Loved the stories and the characters. the ending has me chomping at the bit for more.

Great book with great characters. Fun mix of zombies/ ghouls/ demons/ magic and a bunch of other good stuff. Peter Meredith is a fantastic author, I’ve read over a dozen of his books so far.

Happy but not happy

I extremely dislike cliffhangers, also the narrator made more than a few mistakes while reading I did not enjoy that, also there were cut offs as if it was edited which makes me wonder, if it was edited then why wasn't all the mistakes fixed.

Part two of the Gods of the Undead series. Highly recommend. Great storyline, character development, and plot twists. There were quite a few "I didn't see that coming" moments.
I was enthralled from start to finish!

I need the next book! What a cliffhanger! On a serious note... this series needs different cover art, something Egyptian maybe